After a gap of two months, domestic passenger flight operations resumed on Monday amid reluctance by various states to open up their airports in view of rising cases of the novel coronavirus.

However, large number of flights were also cancelled across the country.

Here are glimpses of Indians catching their first flight after two months: 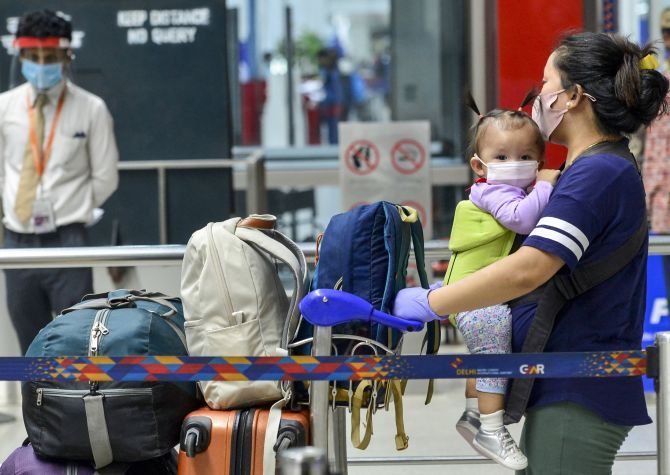 A woman carrying a child arrives at T-3, Indira Gandhi International Airport, New Delhi, for domestic travel, after flights were resumed on Monday. The first flight took off from Delhi for Pune at 4.45 am under strict regulations recommended by civil aviation authorities. Photograph: Kamal Kishore/ PTI Photo 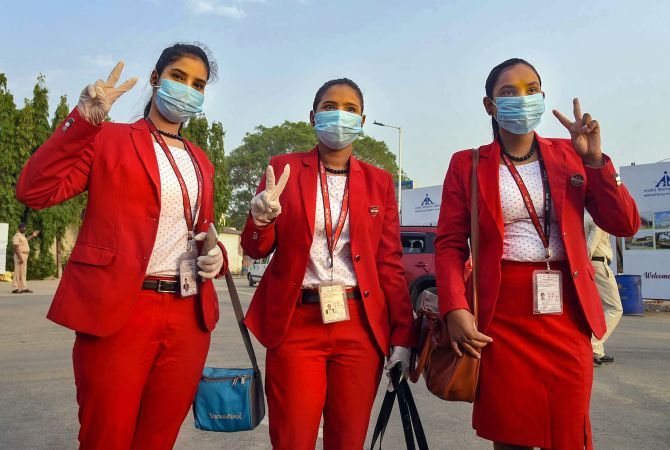 Airline staffers flash victory sign at Jai Prakash Narayan International Airport, Patna, following the resumption of domestic flights. The first flight from Mumbai was to Patna and it departed at 6.45 am. Photograph: PTI Photo 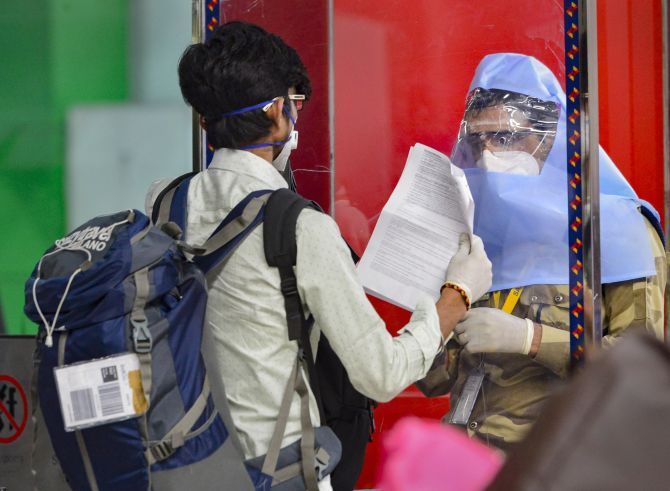 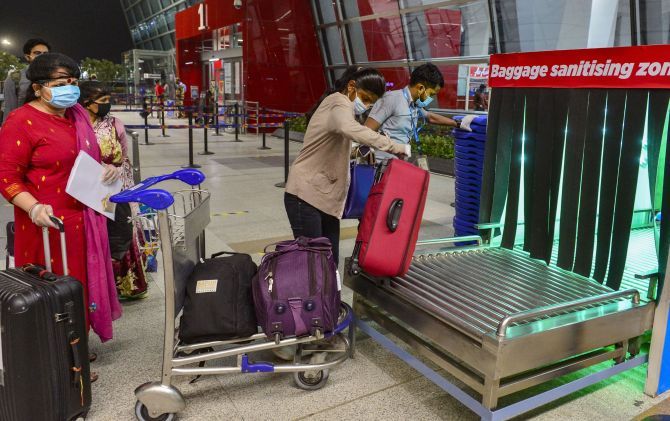 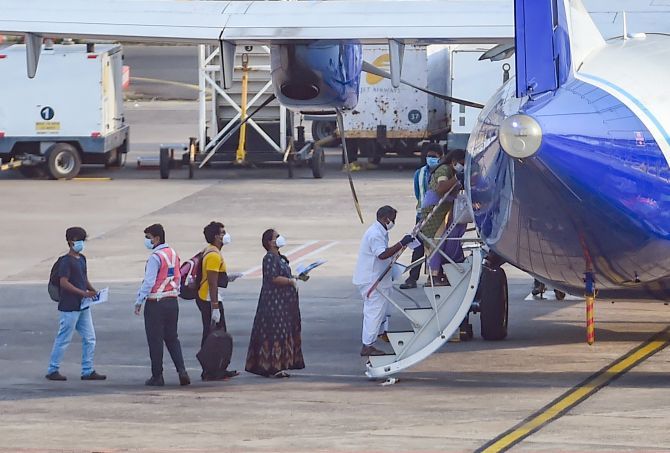 Passengers stand in a queue to board an Indigo plane at Chennai airport. Photograph: R Senthil Kumar/ PTI Photo A SpiceJet plane takes-off from Chennai airport. The airlines, which were allowed to operate one-third of their capacity, have been busy since Sunday night in further reworking their flight schedules. Photograph: R Senthil Kumar/ PTI Photo Passengers maintain social distance as they arrive at Jai Prakash Narayan International Airport, in Patna. Bihar is among the states that have announced their respective quarantine measures for passengers arriving at their airports. Other include Karnataka, Tamil Nadu, Kerala, Punjab, Assam and Andhra Pradesh. Photograph: PTI Photo 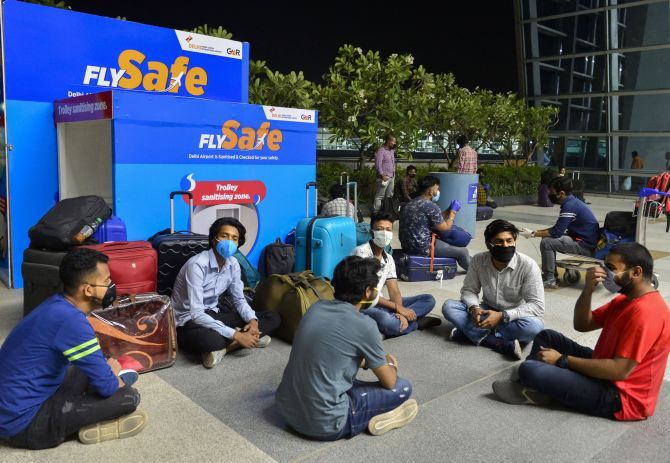 Passengers wait at T-3 ahead of their domestic travel. Bookings had opened for around 1,050 domestic flights planned for Monday but the revised measures announced on Sunday have led to cancellation of several flights leaving hundreds of passengers disappointed. Photograph: Kamal Kishore/ PTI Photo 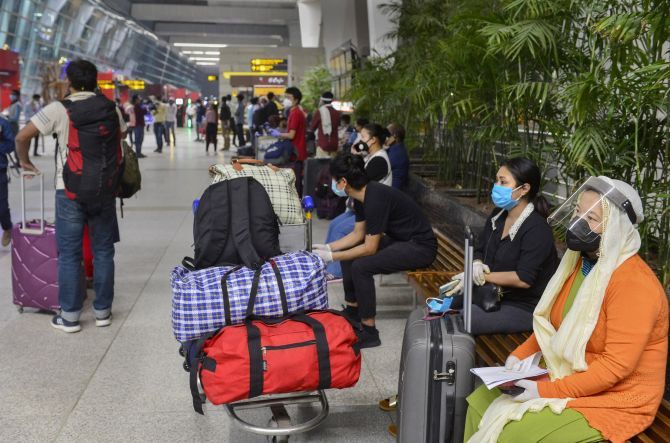 Aviation industry sources said, around 82 flights -- departures and arrivals -- have been cancelled so far at the Delhi airport. Photograph: Kamal Kishore/ PTI Photo 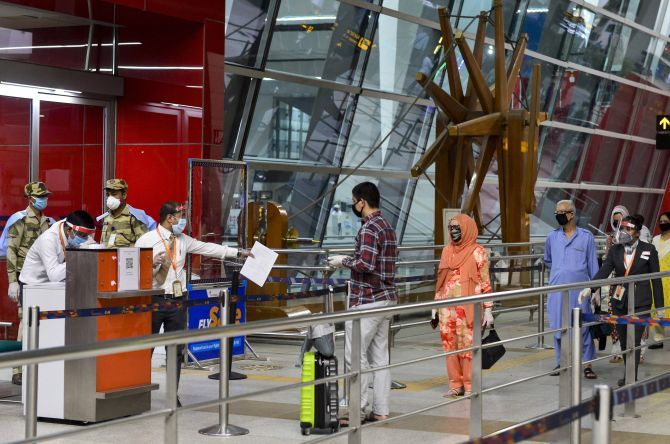 Passengers stand in a queue as they arrive at T-3, IGIA. States like Maharashtra, West Bengal and Tamil Nadu, which are home to some of the busiest airports in the country, were reluctant to allow domestic flight services from their airports, citing swelling cases of the coronavirus infection in their states. Many states have expressed serious reservations about the Centre's decision to start flight services. Photograph: Kamal Kishore/ PTI Photo A passenger gets thermal scanned as he arrives at T-3, IGIA. Some states have decided to put passengers in mandatory institutional quarantine while several others have talked about putting them under home quarantine. Photograph: Kamal Kishore/ PTI Photo A view Chatrapati Shivaji Maharaj International airport in Mumbai. The Maharashtra government had requested the Centre on Sunday to keep air services in the state at a minimum possible level. Mumbai is the country's second busiest airport. Photograph: PTI Photo 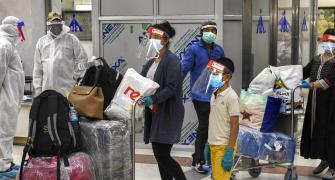 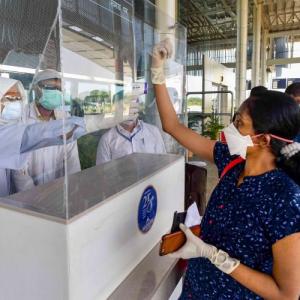 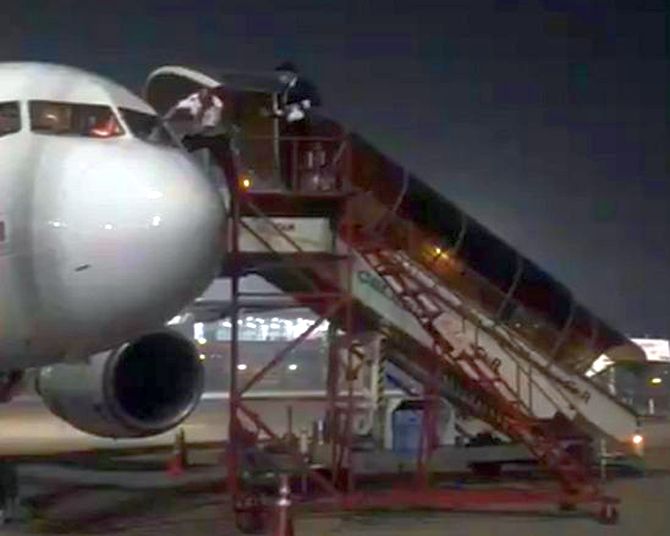