India, Japan and the United States have agreed that a “free, open, inclusive and rules based” order is essential for the Indo-Pacific’s peace and prosperity as the leaders from the three countries held a trilateral meeting for the first time, amidst China flexing its muscles in the strategic region. 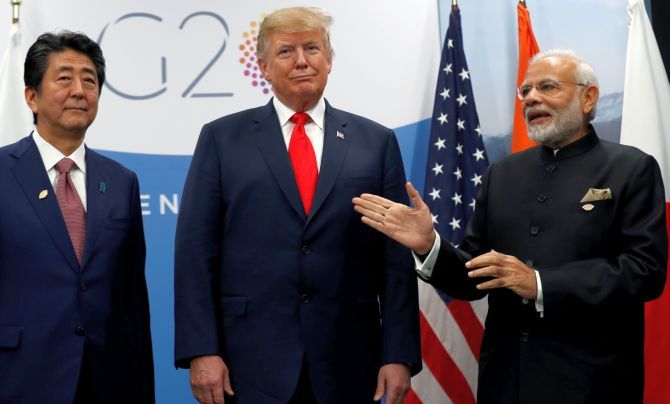 Asserting that India will “continue to work together on shared values,” he said, “When you look at the acronym of our three countries -- Japan, America, and India -- it is ‘JAI’, which stands for success in Hindi.”

The prime minister said the ‘JAI’ meeting was a convergence of vision between the three nations.

“This is a very good occasion for the three countries -- countries which have shared values, democratic values… We will continue to play a big role together for world peace, prosperity and stability,” he said.

The prime minister articulated five action points that would serve the common interest of promoting peace and prosperity in the Indo-Pacific region.

He assured all countries of the inclusiveness and openness of this framework and highlighted the importance of working jointly in areas such as connectivity, sustainable development, disaster relief, maritime security and unfettered mobility.

Modi also underlined the importance of building consensus on architecture in the Indo-Pacific region based on principles of mutual benefit and respect for sovereignty and territorial integrity.

“They all agreed that a free, open, inclusive and rules based order is essential for the region’s peace and prosperity,” Gokhale said.

He said Prime Minister Modi offered some ideas on how to take forward the concept of the Indo-Pacific, how the three countries can work together to promote this concept.

“Prime Minister in particular felt that it is necessary for the three countries to reach out to all the stakeholders to explain the benefit of the Indo-Pacific strategy and their advantages to these countries,” the Indian diplomat said.

The Japanese premier said he was happy to participate in “the first ever ‘JAI’ meeting” and hope that it would reinforce the trilateral partnership and its close cooperation “towards realising a free and open Indo-Pacific”.

“By having three of us working together, we’ll bring more prosperity and more stability in the region, as well as globally,” Abe said.

The leaders emphasised the importance of cooperation among the three countries on all major issue of global and multilateral interests such as connectivity, sustainable development, counterterrorism and maritime and cyber security. 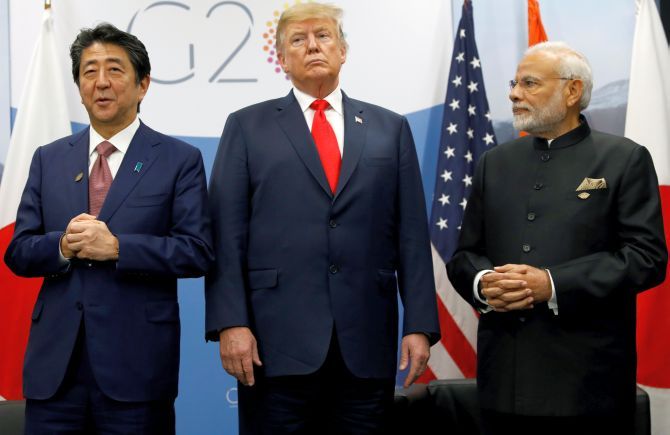 The trilateral meeting took place at a time when China is engaged in hotly contested territorial disputes in the South China Sea, and with Japan in the East China Sea. Both the areas are said to be rich in minerals, oil and other natural resources.

China claims almost all of the South China Sea. Vietnam, the Philippines, Malaysia, Brunei and Taiwan have overlapping claims in the waterway, which includes vital sea lanes through which about $3 trillion in global trade passes each year.

Prime Minister Modi, in his keynote address at the Shangri La Dialogue in Singapore in June expounded India’s stand on the strategic Indo-Pacific region.

“India does not see the Indo-Pacific Region as a strategy or as a club of limited members. Nor as a grouping that seeks to dominate. And by no means do we consider it as directed against any country. A geographical definition, as such, cannot be,” he had said.

Modi, Trump and Abe also agreed to cooperate in various ways and together with other countries.

The leaders agreed on the central role of ASEAN and they also agreed to work on maritime and connectivity issues and to synergize efforts in this regard, Gokhale said.

All three leaders felt that such meetings are useful and they should continue in the margins of the subsequent G20 meetings, he said, adding that the outcome of this first trilateral has been “very encouraging.”

White House spokeswoman Sarah Sanders said in a statement that the trilateral summit “reaffirmed the importance of the free and open Indo-Pacific vision for global stability and prosperity, and pledged to deepen trilateral cooperation.” 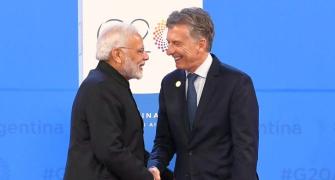 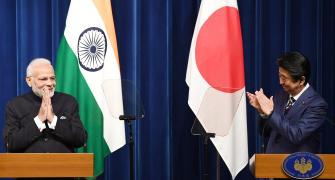 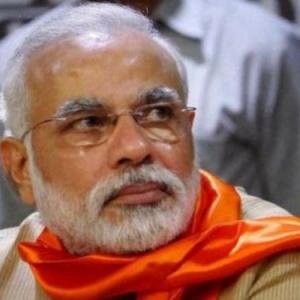 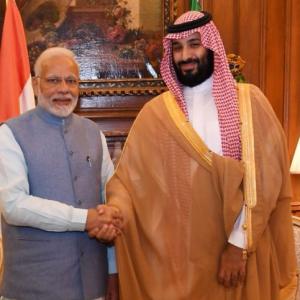