Lights decked up buildings and earthen lamps dotted houses as India celebrated Diwali on Saturday amid COVID-19 restrictions and a ban on bursting of firecrackers in several states. IMAGE: Illuminated Akshardham temple for Diwali amidst the spread of COVID-19, in Gandhinagar. Photograph: Amit Dave/Reuters

In his message, Kovind said: "May this grand festival of happiness and light bring delight, peace and prosperity to each and every house of our country."

Naidu hoped that this festival of light ushers happiness, prosperity and peace. In a tweet, Modi said, "Best wishes to all countrymen on Diwali. Wishing everyone a Happy Diwali! May this festival further brightness and happiness. May everyone be prosperous and healthy."

Like previous years, Modi celebrated Diwali with soldiers. He flew to the Longewala Post in Rajasthan and praised the soldiers for their valour, saying no force in the world can prevent the country's brave soldiers from defending its borders.

"The world today knows that we will not compromise with our interests even one bit at any cost," he said.

In Maharashtra, 'Diwali Pahat' cultural programmes, an integral part of the festival, were missing this year due to the coronavirus outbreak. However, some organisations conducted online programmes, like musical events and interviews. IMAGE: Girls pose after lighting oil lamps around a "Rangoli", outside their home to celebrate Diwali, in Nagaon in Assam. Photograph: ANI Photo

Though the Maharashtra government has not banned firecrackers, the Shiv Sena-led Brihanmumbai Municipal Corporation has announced restrictions on the use of crackers and fireworks in the city.

The civic body has, however, allowed use of 'mild firecrackers' on Laxmi Pujan.

On the commercial front, domestic equity benchmarks surged to lifetime highs as investors built up fresh positions in the special Muhurat trading session to mark the beginning of Hindu Samvat year 2077.

The Golden Temple in Amritsar was illuminated with special lighting system and traditional 'diyas'. It witnessed a huge rush of devotees who took a dip in its holy tank and offered prayers at the sanctum sanctorum. IMAGE: Devotees light the candles and earthen lamps on the occasion of Diwali at Golden Temple, in Amritsar. Photograph: ANI Photo

The task force of the Shiromani Gurdwara Parbandhak Committee was also deployed in the periphery of the Golden Temple. Community kitchen were arranged for the devotees who will stay in the Golden temple complex all through Diwali night.

Meanwhile, 'Bandi Chhor Divas' (prisoner release day) was celebrated in Punjab, to mark the historical release of the sixth Sikh guru, Guru Hargobind, from the Mughal prison along with 52 kings in 1620.

Guru Hargobind directly reached the Golden Temple after his release, whereupon the holy city was illuminated and decorated and people lit earthen lamps to celebrate his release.

With several farmers groups agitating against the Centre's new farm laws, peasants at many places in Punjab including Amritsar, Mohali, Sangrur and Faridkot districts held protests on Diwali day. In Jammu and Kashmir, Army, central paramilitary forces and police personnel celebrated the festival with enthusiasm at their locations along the border and hinterland amid strict vigilance in the wake of recent ceasefire violations by Pakistan.

The temples also witnessed heavy rush though the people were seen observing social distancing and following other guidelines and safety measures against the VOCID-19, the officials said.

Officials said army and Border Securty Force illuminated the border fence along the International Border and Line of Control with candle lights and 'diyas' (earthen lamps) at various places.

Kali puja was celebrated in several states, including West Bengal where people visited Kali temples since the morning to pay obeisance to the deity. 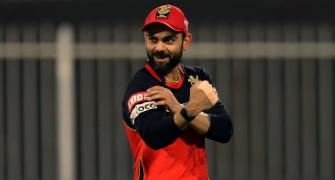 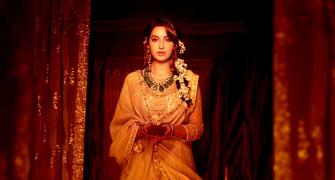 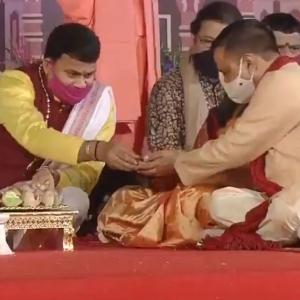 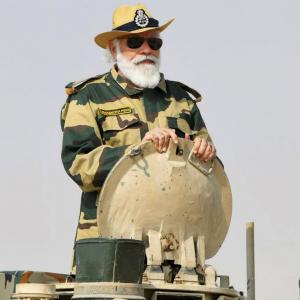