News
Business
Movies
Sports
Cricket
Get Ahead
Money Tips
Shopping
Sign in  |  Create a Rediffmail account
Rediff.com  » News » How dangerous is it to run with the bulls?

How dangerous is it to run with the bulls?

When running with the bulls, injuries are a given and this year was no different.

The annual festival (made famous in India by the movie Zindagi na Milegi Dobara) to honour Saint Fermin began on July 6 and ended on July 14 in raucous celebrations and euphoria.

While some question if the centuries-old tradition should continue, with many raising objections about the cruelty to the bulls, the practice, regardless of all the danger and controversy continues to be a crowd-puller of epic proportions.

Here are some glimpses from the festival. 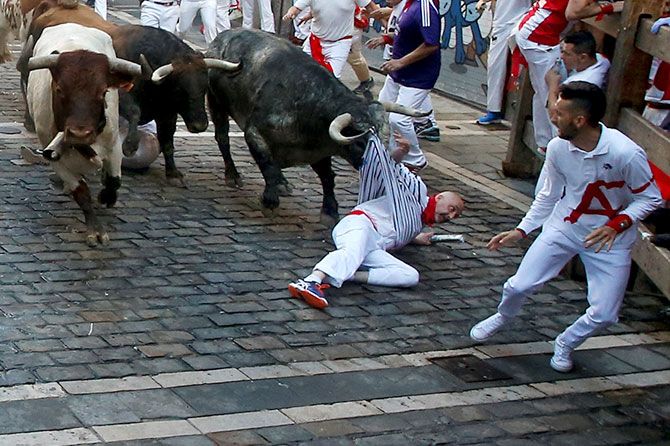 The origin of this event comes from the urgency to transport the bulls from the fields outside the city, where they were bred, to the bullring, where they would be killed in the evening. During this run, youngsters used to jump among them to show off their bravado. In Pamplona and other places, the six bulls in the event are still those that will feature in the afternoon bullfight of the same day. Photograph: Joseba Etxaburu/Reuters 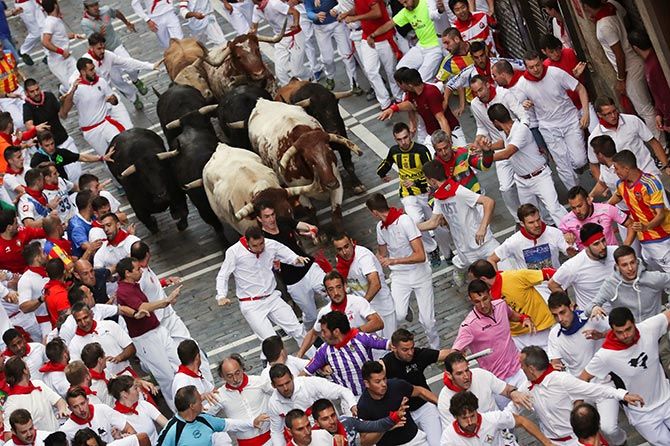 Despite the chances of being gored are very high, it seems just as popular on bucket lists now as it was when it shot to worldwide fame in 1926 with its depiction in Ernest Hemingway’s novel “The Sun Also Rises.” Photograph: Susana Vera/Reuters 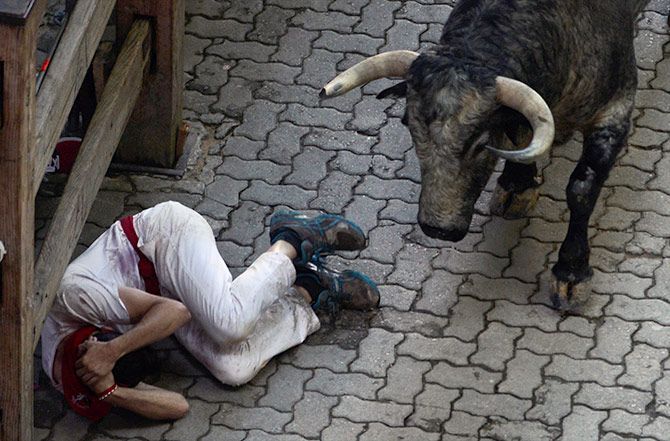 This year a total of 28 people have been injured during the annual bull run of the San Fermin festival in Pamplona, Spain. Spanish health officials say the last run left six people injured in the fastest dash this year. Two of the 28 people injured this year were gored. Photograph: Vincent West/Reuters 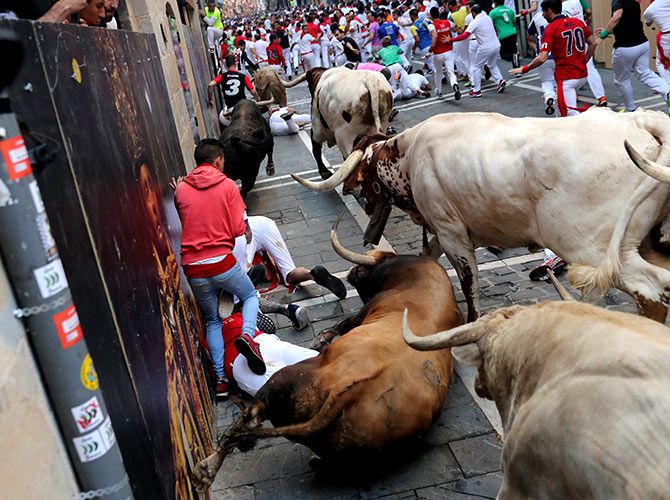 Going by the records that date back to 1922, the number of injuries has grown by about 5.1 per cent on an average since 1980. Photograph: Susana Vera/Reuters 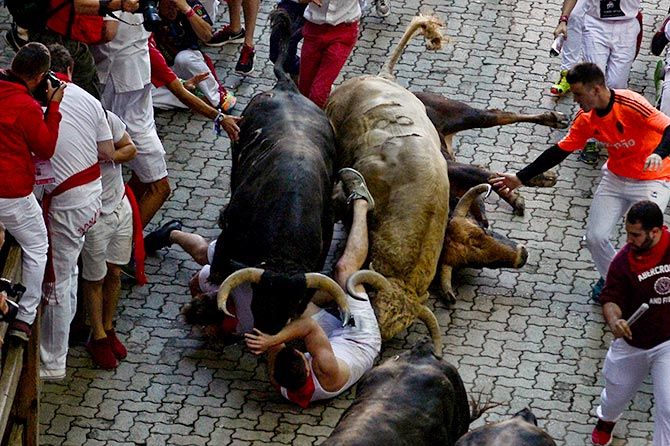 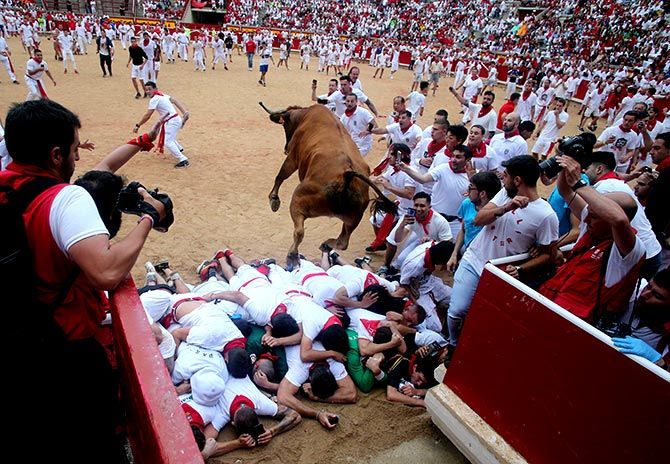 Many choose to opt for the run as they consider it to be a macho act and adventure junkies speak of the highest thrill they receive at the thought of being chased by a bull. Photograph: Vincent West/Reuters 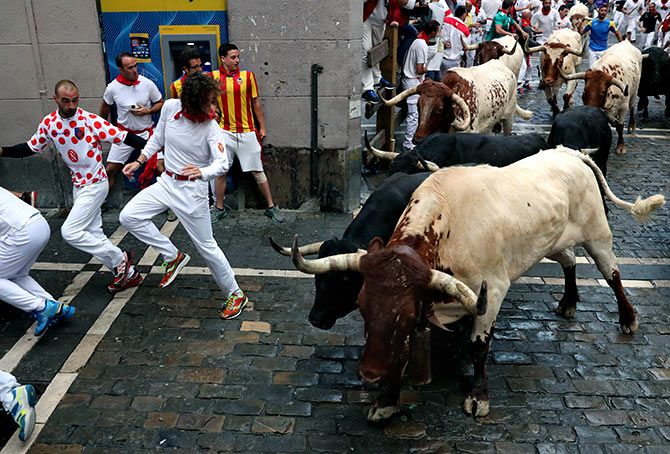 Here’s a tip for future runners; The goal of running with the bulls is to show some bravery by getting in front of the bull horns and running with the herd of bull brothers for a couple of moments. Slapping at or grabbing at the bull, touching its horns, or tugging its tail, are not only insults to the local citizenry, and illegal, but also dangerous because it may distract the bull enough to come and find you. Photograph: Susana Vera/Reuters 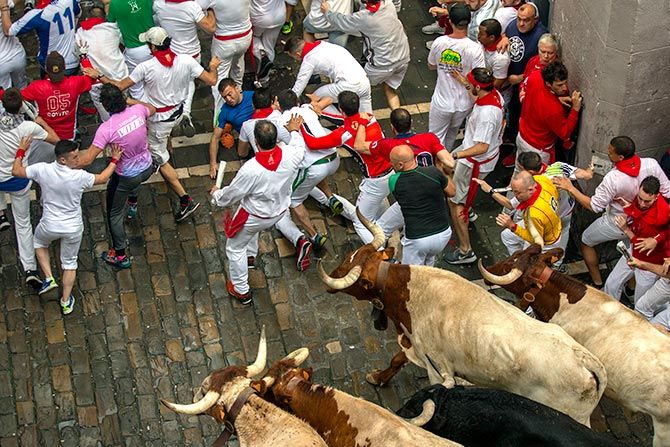 The run, in the recent years, has begun to face increasingly fierce criticism, not least from animal-rights organisation Peta, which claims workers use electric prods and sharp sticks to work the bulls into a frenzy before they’re let loose to rampage through the streets. Photograph: Pablo Blazquez Dominguez/Getty Images 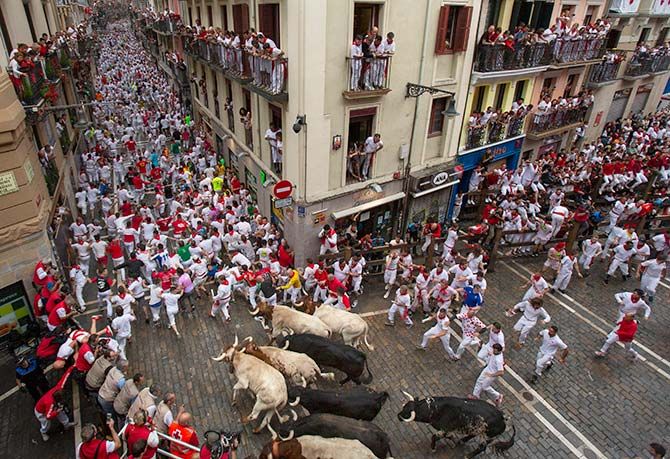 Running with the bulls isn’t just dangerous owing to the speeding bulls charging at you. Reports of sexual assaults on women, ranging from vulgar comments, harassment and even rape have emerged, marring the reputation of the centuries-old practice. Photograph: Pablo Blazquez Dominguez/Getty Images 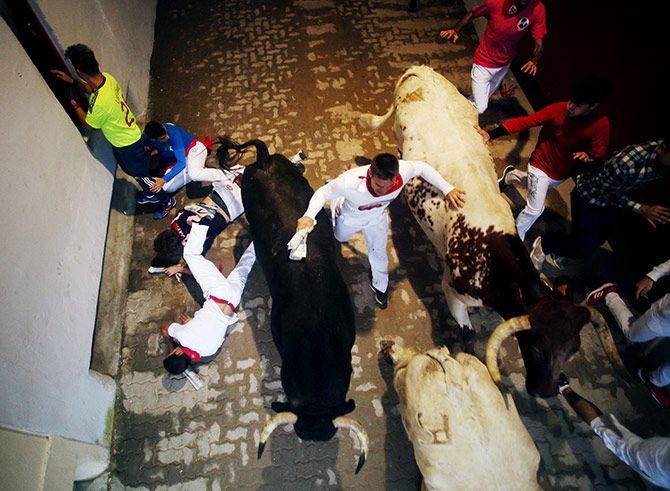 However, those who have run with the bulls and come out unscathed had this to say about it: Run with the bulls, and you will learn more about yourself in those five minutes than you ever imagined. Photograph: Vincent West/Reuters 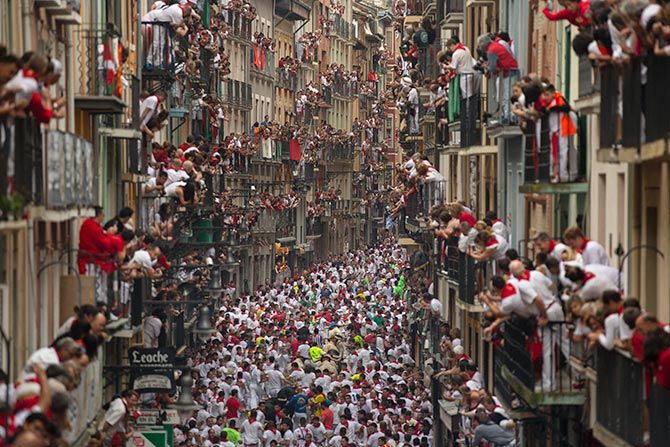 Aficionados are unmoved by the protests and complaints and come out in the hundreds to support the run. Their argument is: It’s a long-standing tradition. Photograph: Pablo Blazquez Dominguez/Getty Images 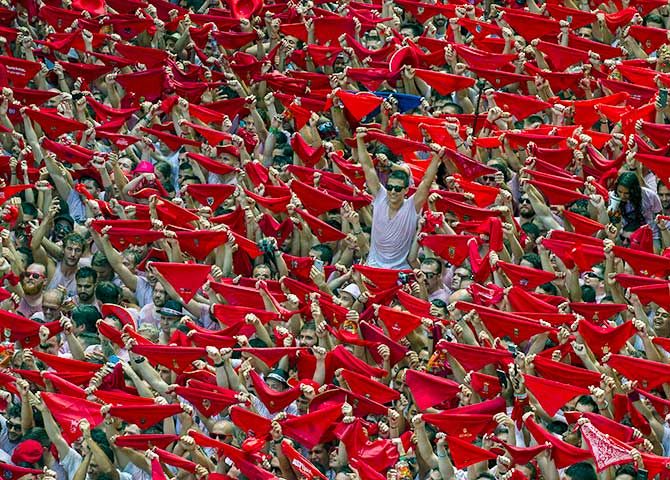 And after all that danger comes the party. The attendees of the run celebrate wildly with generous amounts of alcohol and turn the streets into one huge carnival. Photograph: Pablo Blazquez Dominguez/Getty Images
Related News: Reuters, Pablo Blazquez, Vincent, Susana, Daniel Jimeno Romero
SHARE THIS STORY
Print this article 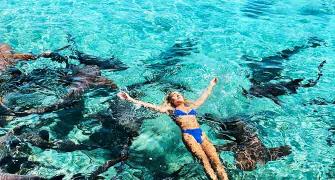 PHOTOS: Shark takes a bite out of model during photo shoot 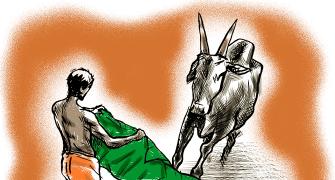 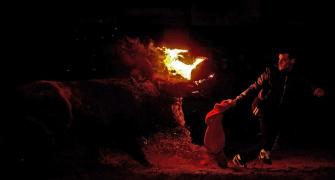 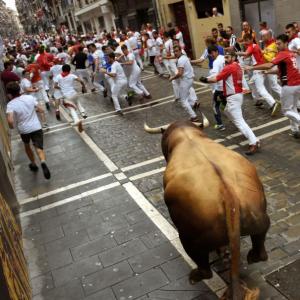 PHOTOS: Run, the bulls are coming!