My husband won't stop fighting for you: Melania tells Americans

Describing United States President Donald Trump as someone who is not a traditional politician, First Lady Melania Trump has made a passionate plea to her countrymen to re-elect her husband who will not stop fighting for them as “America is in his heart.” IMAGE: US First Lady Melania Trump addresses the Republican National Convention from the Rose Garden at the White House in Washington, DC. The convention is being held virtually due to the coronavirus pandemic. Photograph: Alex Wong/Getty Images

Melania, 50, in her historic address to the Republican National Convention from the Rose Garden of the White House on Tuesday said, “I am here because we need my husband to be our President and Commander-in-Chief for four more years. He is what is best for our country."

Melania opted Rose Garden as the place of her address to the Republican National Convention as the organisers had to drastically scale down the convention at its original venue of Charlotte in North Carolina due to the raging coronavirus pandemic.

This is for the first time in recent memory that a First Lady has addressed the convention from Rose Garden of the White House.

Calling her husband an "authentic person" in reference to Trump's directness and unfiltered commentary, the First Lady concluded her keynote address by saying: "I believe that we need my husband's leadership now more than ever."

“As you have learned over the past five years, he is not a traditional politician... He doesn't just speak words. He demands action and he gets results. The future of our country has always been very important to him, and it is something that I have always admired,” the First Lady said.

“America is in his heart,” she said. IMAGE: US President Donald Trump and first lady Melania Trump embrace after she addressed the Republican National Convention from the Rose Garden at the White House. Photograph: Alex Wong/Getty Images

US President Trump is scheduled to deliver his nomination acceptance speech from the South Lawns of the White House on Thursday.

"I know I speak for my husband and the entire family when I say we have not forgotten the incredible people who were willing to take a chance on a businessman who had never worked in politics," Melania said as she shared her husband's vision of a better, stronger and safer America.

“We all know Donald Trump makes no secrets about how he feels about things. Total honesty is what we as citizens deserve from our president. Whether you like it or not, you always know what he's thinking. And that is because he's an authentic person who loves this country and its people and wants to continue to make it better,” the US First Lady said.

“If you tell him it cannot be done, he just works harder. He's what is best for our country,” Melania said, drawing applause from the select invited guests at the Rose Garden of the White House.

"In my husband, you have a president who will not stop fighting for you and your families,” she said.

Referring to COVID-19, she said her husband's administration will not stop fighting until there is an effective treatment and vaccine available to everyone.

The Trump administration has been criticised for his handling of the coronavirus which has infected 5 million people and killed more than 170,000 in the country. IMAGE: US First Lady Melania Trump walks along the colonnade before addressing the Republican National Convention. This is for the first time in recent memory that a First Lady has addressed the convention from Rose Garden of the White House. Photograph: Alex Wong/Getty Images

“Donald wants to keep your family safe. He wants to help your family succeed. He wants nothing more than for this country to prosper and he doesn't waste time playing politics,” the First Lady said.

She also spoke on the issue of race and religion.

“I have reflected on the racial unrest in our country. It is a harsh reality that we are not proud of parts of our history," the Slovenian-American said.

“Stop the violence and looting being done in the name of justice, and never make assumptions based on the colour of a person's skin," she said.

“I know many people are anxious and some feel helpless. I want you to know you are not alone," she said.

“I urge people to come together in a civil manner, so we can work and live up to our standard American ideals,” she said.

“Since taking office my husband and this administration have taken historic measures to empower and support women in the United States -- and around the world,” she added.

Telling her countrymen that “We will be honoured to serve this incredible country for four more years,” the US First Lady said that her husband knows how to make real change.

US President Donald Trump's family took centrestage at the Republican Convention, passionately rallying behind him and highlighting his political, economic and foreign achievements as they urged American voters to re-elect him for a second term. 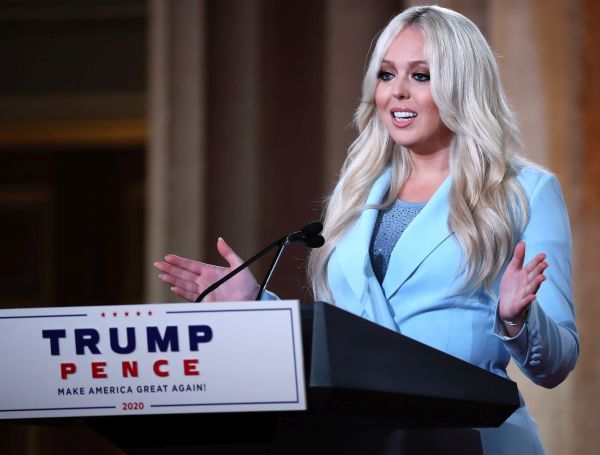 His other daughter and senior adviser Ivanka Trump, 38, will speak on Thursday, the last day of the convention.

Addressing the Convention's first night on Monday, Donald Trump Jr, 42, said Trump's America is “a land of opportunity, a place of promise."

“I was fortunate enough to grow up in a family that could afford the best schools and the finest universities, but a great education cannot be the exclusive right of the rich and powerful. It must be accessible to all. And that's why my dad is pro school choice. That's why he's called education access the civil rights issue, not just of our time, but of all time,” he said.

Tiffany Trump, 26, said that a vote for her father is a vote to uphold American ideals.

“My father is the only person to challenge the establishment, the entrenched bureaucracy, big pharma, and media monopolies to ensure that Americans' constitutional freedoms are upheld, and that justice and truth prevail.

“My father does not run away from challenges -- even in the face of outright hatred -- because fighting for America is something he will sacrifice anything for. He dreams big dreams for our country -- and he is relentless at achieving them,” she said.

“You see, Make America Great Again is not a slogan for my father, it is what drives him to keep his promise of doing what is right for American citizens,” Tiffany added. Addressing the convention, Eric Trump, 36, said his father ran for office, not because he needed the job, but because he knew hardworking people across this great country were being left behind.

“My father pledged to every American in every city, state and town: He Was Going to Make America Great Again,” he said.

Eric said he'd like to “speak directly to my father” and pointed out that he misses working alongside Trump every day but he is proud to be on the front lines of this fight.

“I am proud of what you are doing for this country. I am proud to show my children what their grandfather is fighting for. I am proud to watch you give them hell. Never stop. Continue to be unapologetic. Keep fighting for what's right. You are making America strong again.

“And, yes, together with the Forgotten Men and Women -- who are finally forgotten no more -- you are making America Great Again! Dad, let's make Uncle Robert proud. Let's go get another 4 years,” he said, making a reference to Trump's younger brother who passed away this month in New York at the age of 71. 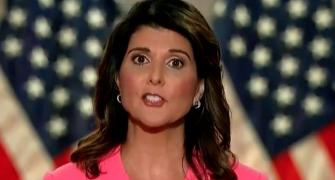 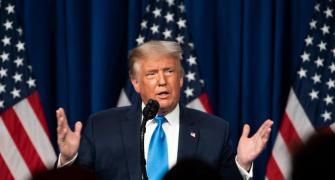 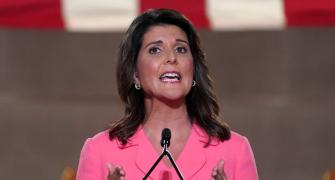 Haley invokes her Indian roots, says US is not racist 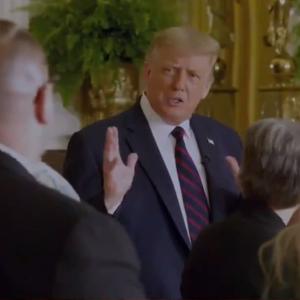