The Republican National Convention on Monday formally re-nominated President Donald Trump as the party's presidential candidate for the November 3 election. 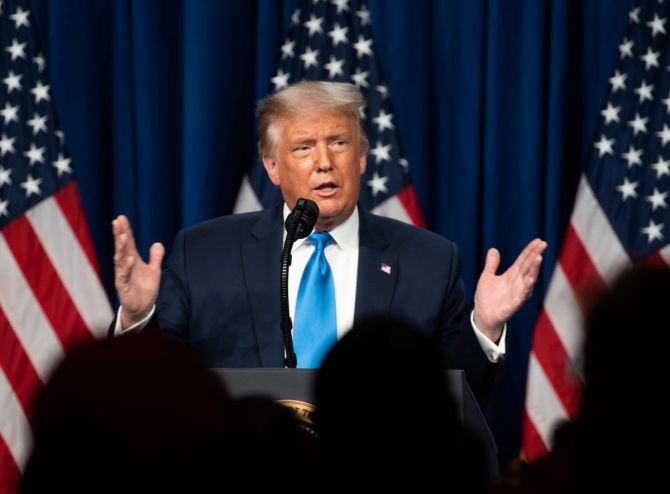 Trump, 74, who faces a formidable challenge from former Democratic vice president Joe Biden, 77, is scheduled to deliver his acceptance speech from the South Lawn of the White House on August 27.

The once in four-year GOP (Grand Old Party) convention is being held in virtual mode due to the raging coronavirus pandemic.

A small part of the official business of the convention is being held at Charlotte in North Carolina.

Trump was re-nominated following a roll call of votes from elected Republican Party delegates from all the 50 States.

Vice President Mike Pence, 61, was also re-nominated as the running mate of Trump.

Making a surprise appearance at the drastically cut-down Charlotte convention, Trump described the November polls as the 'most important election' in the history of the US.

The country can go either in a 'horrible' or a 'greater' direction, he said, urging his supporters to be watchful of the activities of his opponents.

Trump alleged the Democrats are 'trying to steal the elections' through mail-in-vote just like they 'spied' on his campaign in 2016.

"It is a disgrace to our country," he said.

"Now they are doing which is more dangerous. They are stealing millions of votes," Trump alleged and asserted that he is going to win the election, unless it is a 'rigged' one.

"We have tremendous enthusiasm. We have a record enthusiasm. They (Democrats) have no enthusiasm," Trump said.

China will own the US if the Democrats are voted to power in the November. election, he said.

"They (Democrats) are using COVID-19 to steal the elections. The US will never forget it has suffered due to the virus coming from China," Trump said.

"We will not be taking 'God' out of the Pledge of Allegiance like the Democrats did," he said, slamming the Democrats.

"Our country will never be a socialist country," Trump asserted, amidst a huge round of applause from the delegates.

This election, he said, has far greater enthusiasm than ever.

Pence also made a surprise appearance at Charlotte where the roll call vote was done. He will deliver his formal acceptance speech on Wednesday.

"We will be taking our case to the American people this week," Pence said soon after he and Trump were re-nominated by the party for the November election against the Biden-Harris Democratic ticket.

"It's going to be four more years. We are going to make America great again. Again," a confident Pence said.

Earlier, Trump's re-election campaign released a set of core priorities for a second term under the banner of 'Fighting for You!'

Trump's boundless optimism and certainty in America's greatness is reflected in his second-term goals and stands in stark contrast to the gloomy vision of America projected by Biden and Democrats, the Trump campaign said.

Among top promises made by the Trump campaign for the second term included creating 10 million new jobs in 10 months, developing a vaccine for coronavirus by year end and return to normal in 2021.

The campaign has also pledged to prohibit American companies from replacing US citizens with cheaper foreign workers and require new immigrants to be able to support themselves financially.

Reiterating its commitment to a 'America First Foreign Policy', the campaign also promises to stop endless wars and bring troops home, get allies to pay their fair share, maintain and expand US' unrivaled military strength, wipe out global terrorists who threaten to harm Americans and build a great cybersecurity and missile defence systems.

On the first day of the convention, Trump's son Donald J Trump Jr would be the star speaker along with former India-American US Ambassador to the United Nations, Nikki Haley, and many others.

The speakers are expected to highlight the achievements of the Trump administration in the three-and-a-half years and launch a blistering attack on Democratic rivals Biden and Kamala Harris.

Led by Trump, the Republican leaders are expected to continue to accuse Biden of being taken by the radical left.

Economy, law and order and freedom is on the ballot, Pence said setting the tone of the speakers over the next four days.