Banks, ATMs and quite a few markets were kept open on Sunday while 2.5 lakh sacrificial goats have been made available in the Kashmir valley to help citizens celebrate Eid-ul-Azha with traditional fervour, unaffected by revocation of the special status, said officials. 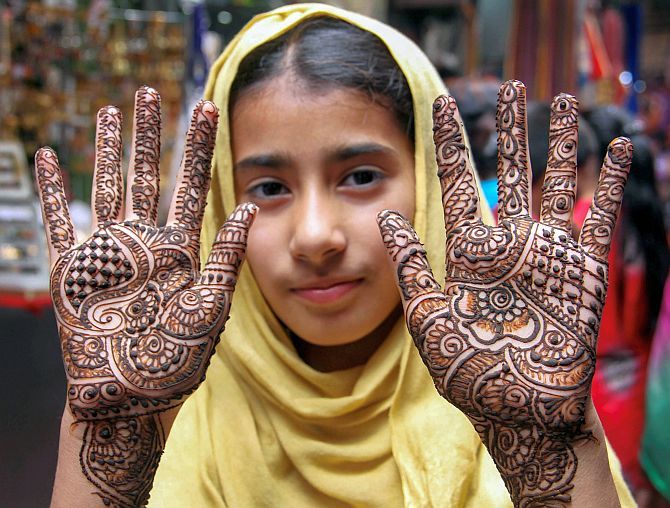 The authorities have also deployed mobile vans for door to door delivery of vegetables, LPG cylinders, poultry and eggs, they added.

Treasuries, banks and ATMs have been made functional even on holidays in the run-up to the festival, a government official said on Sunday.

The replenishment of cash in ATMs has been ensured on regular basis and people are drawing money from ATMs as and when required, said officials, adding salaries of all employees and wages of casual labourers too have been released in advance.

Six 'mandies' and markets have been established in Srinagar city while 2.5 lakh sheep have been made available for public for sacrifice on Eid-ul-Azha on Monday. IMAGE: Vendors along with their cattles arrive at a market ahead of Eid al-Adha festival. Photograph: PTI Photo

The district magistrates of all districts in the valley have made elaborate arrangements for the Eid-ul-Azha, the official said.

Ration 'ghats' in every district have started functioning to supply groceries to people.

Special and elaborate arrangements have been made for the safe and hassle-free returns of Hajis from Saudi Arabia, for which flights will commence on August 18.

All deputy commissioners have nominated their nodal officers who will be stationed at the airport from August 18 to facilitate the return of 'hajis' to their native places in the city and elsewhere in the Valley. 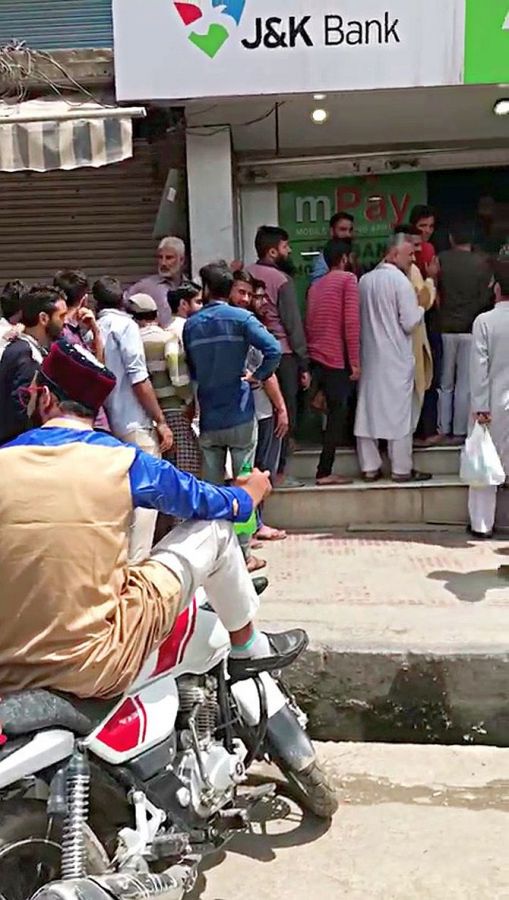 IMAGE: People stand in a queue to withdraw money from an ATM in Srinagar. Photograph: ANI Photo

Special help-line desks will be established at the airport and Hajj houses for the convenience of 'hajis'.

Wheat has been stocked to suffice for 65 days, rice for 55 days, mutton for 17 days, poultry for one month, kerosene for 35 days, LPG for one month, and diesel and petrol for 28 days.

All bakery, poultry and mutton shops were kept open on Sunday and long queues were seen outside these shops, another official said, adding traffic is plying smoothly in Srinagar city.

All health institutions at primary, secondary and tertiary level in Kashmir division are functioning fully with sufficient number of doctors and para-medical staff on duty.

Identity cards of medical staffers are being treated as movement passes, said officials, adding all medicines are also available in sufficient quantity in all health institutions.

Flights are operating as per the schedule and air tickets too are being treated as movement passes, they added.

Magistrates have been deployed at every critical place to act as facilitators for the convenience of general public.

As many as 300 special telephone booths are being established to help public to communicate with their kin and relatives, the official said. Various municipal corporations and other civic body in the valley too have taken additional steps to ensure complete cleanliness and sanitation in their respective areas.

To ensure round the clock power supply and its immediate restoration following faults and breakdowns, sufficient staffers have been deployed in various power utilities, officials said, adding adequate transmission cables and transformers are there in the stock to meet any contingency.

Similar arrangements have been made to ensure round the clock water supply with deployment of sufficient staffers at pumping stations and water plants.

For Eid, other than the provisional stores, bakery and sweet shops too have been facilitated to remain open and cater to the people's needs.

The government has also deployed liaison officers in various places in the country, including Aligarh and New Delhi, to help students hailing from Kashmir and pursuing their studies outside the Valley, to celebrate Eid and communicate to their family members in the Valley.