Bangladesh plane with 67 on board crashes in Nepal, 50 killed

A Bangladeshi passenger aircraft crashed and burst into flames on Monday while landing at the Tribhuvan International Airport in Kathmandu, killing at least 50 people, in Nepal’s worst aviation disaster in more than 25 years. The Dhaka to Kathmandu US-Bangla Airlines flight, with 67 passengers and four crew members on board, caught fire after it careened off the runway and ploughed into a football ground near the airport, TIA spokesperson Prem Nath Thakur said.

There were 33 Nepalese nationals on board flight UBG 211, a Bombardier Dash 8 Q400. Others include 32 Bangladeshis, one Chinese and one Maldivian.

Bombardier is a twin-engine, medium-range and turboprop aircraft. 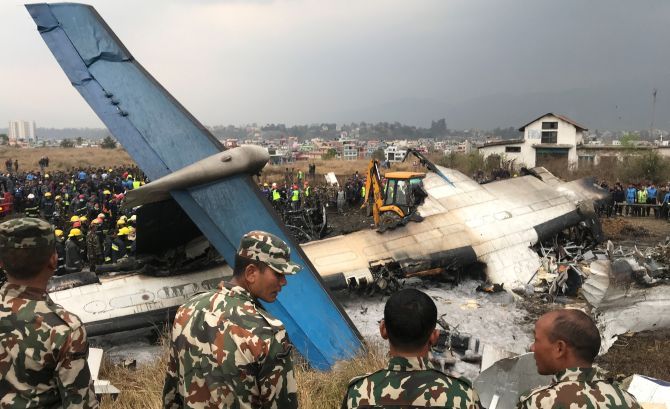 The black box of the aircraft was recovered from the spot, Chhetri said.

The condition of over two dozen people who were admitted to the hospital in Kathmandu is said to be serious.

According to SSP Bishwaraj Pokharel, spokesperson at Kathmandu Metropolitan Police Range Office, 49 were confirmed dead in the crash.

Plumes of black smoke could be seen rising from the football ground where the plane crashed. Several bodies that lay on the tarmac, covered with yellow cloth, were charred.

The aircraft took off from Dhaka and landed at the airport at 2:20 pm (local time).

“The plane shoot off the runway while it was about to crash into the hanger and immediately caught fire,” an airport official was quoted as saying by the Himalayan Times.

The officials, however, have said a technical glitch could be the cause of the accident.

“The aircraft was permitted to land from the Southern side of the runway over Koteshwor but it landed from the Northern side,” Director General of Civil Aviation Authority of Nepal (Caan) Sanjiv Gautam was quoted as saying by the Kathmandu Post.

He said the plane was “out of control” when it attempted to land on the runway.

“We are yet to ascertain the reason behind the unusual landing,” he said suspecting the aircraft might have sustained some technical glitches.
In Dhaka, US-Bangla Airlines CEO Imran Asif said a conversation between the pilot, Abid Sultan, and the air traffic control or ATC of the airport indicated that the ATC sent “wrong signals’ to the pilot.

“We are not accusing anyone now. We suspect it might have led to the crash,” he was quoted as saying by the bdnewss24.

Basanta Bohora, a Nepalese and one of the few passengers to escape with injuries in the deadly plane crash, said he is lucky to be alive. 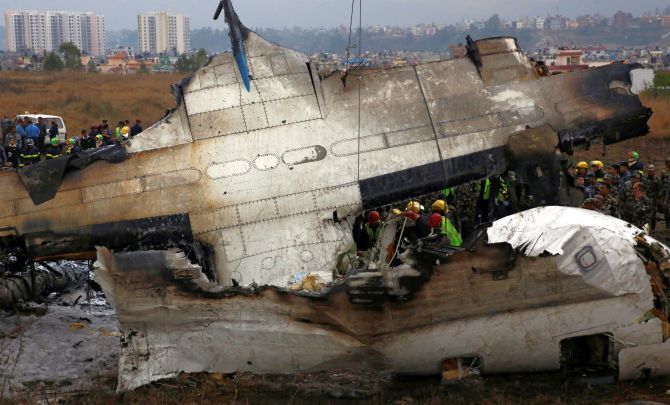 “All of a sudden the plane shook violently and there was a loud bang afterwards,” he said.

“I was seated near the window and was able to break out of the window,” he said. “I have received injuries to my head and legs but I am fortunate that I survived the ordeal.”

All the flights to and from TIA have been halted after the crash.

The Dhaka-based US-Bangla Airlines is a private carrier that launched in July 2014 with the motto “Fly Fast Fly Safe”. The airline is a unit of the US-Bangla Group, a US Bangladeshi joint venture company.

Nepal has witnessed a number of accidents involving aircraft in recent years.

Monday’s accident is deadliest since September 1992 when all 167 people aboard a Pakistan International Airlines plane were killed when it crashed near the Kathmandu airport.

IMAGES: Wreckage of an airplane is pictured as rescue workers operate at Kathmandu airport in Nepal. Photographs: Navesh Chitrakar/Reuters 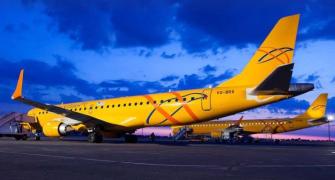