News
Business
Movies
Sports
Cricket
Get Ahead
Money Tips
Shopping
Sign in  |  Create a Rediffmail account
Rediff.com  » News » When Amit Shah had lunch at a farmer's home in Bengal

When Amit Shah had lunch at a farmer's home in Bengal

Union Home Minister Amit Shah on Saturday had lunch at the house of a farmer in West Bengal's Paschim Medinipur district as part of his exercise to strengthen relations with the agriculturists ahead of the assembly elections in the state. 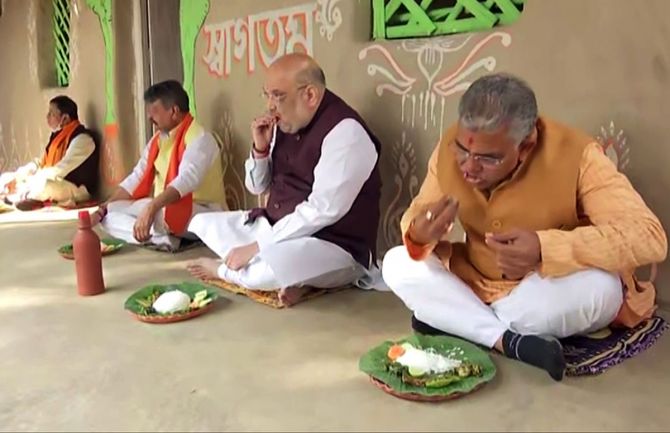 Shah's move assumes significance in the wake of the ongoing farmers' protests in Delhi against the three farm laws.

Shah, who is on a two-day visit to West Bengal to take stock of the Bharatiya Janata Party’s affairs in the state, arrived on Saturday and offered puja at a local temple.

Then, the union minister went to the residence of Sanatan Singh at Balijhuri and had lunch there, sitting on the floor of the thatched house.

It was a vegetarian platter of Bengali delicacies, served on a banana leaf by the women family members of Singh. 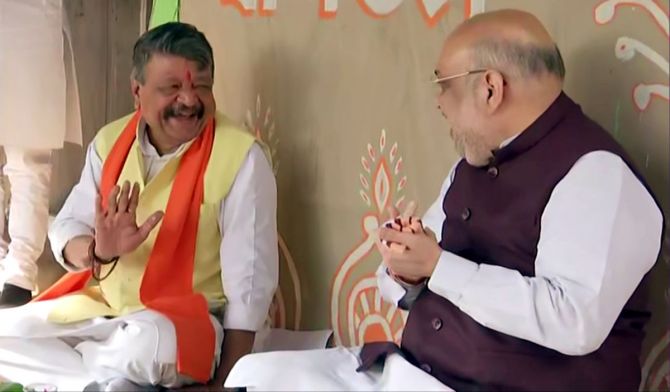 Shah and other guests, who sat on the floor of the verandah of the two-storey thatched house with tinned roof, had 'saak bhaja', 'lou daal', 'shukto' (mixed veg stew which is slightly bitter), 'phulkopi tarkari'(cauliflower curry),'posto' (potato cooked in poppy seed paste) and 'tok doi'.

Earlier, the union minister and other BJP leaders were greeted by ululating and blowing of conch shells by the women members of the household, including Singh's wife.

Tight security arrangements were made and members of the media and other party leaders were kept outside the house, and Shah's security personnel checked the premises repeatedly.

During his November visit to the state, he had lunch at the residence of a tribal BJP worker in Bankura and the house of a matua community member in North 24 Parganas. Amid rebellion in TMC, Shah on 2-day visit to Bengal