The walled city of Jaipur, known for its iconic architectural legacy and vibrant culture, made its entry into the UNESCO World Heritage Site list on Saturday, becoming the second city of the country after Ahmedabad to get the recognition. 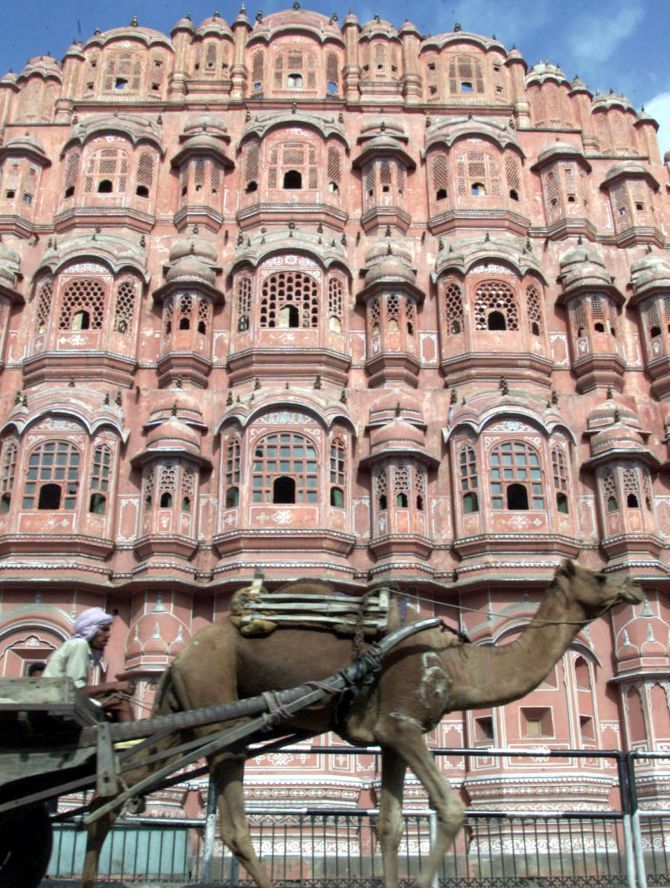 IMAGE: A camel rider waits the Hawa Mahal in the city of Jaipur. Photograph: Pawel Kopczynski/Reuters

The decision was taken at the 43rd Session of the UNESCO World Heritage Committee in the historic city of Baku, Azerbaijan, from June 30-July 10.

The committee examined the nomination of Jaipur that was supported by a majority of the countries for its inclusion on the list, a senior official said.

With Jaipur's inclusion, the number of heritage sites across India that are on the UNESCO World Heritage list, has grown to 38, including 30 cultural properties, seven natural properties and one mixed site. Ahmedabad became the first Indian city to get into the prestigious list in 2017. 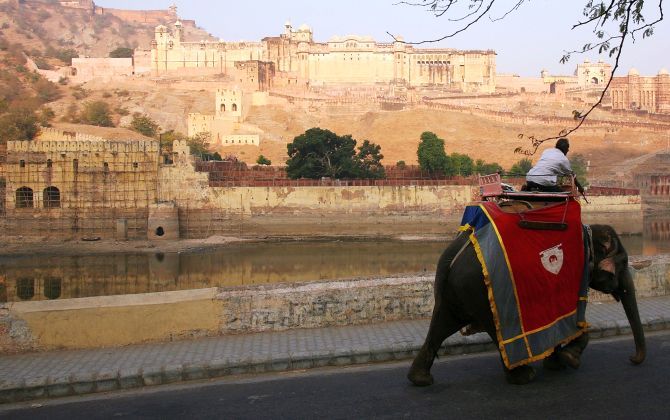 IMAGE: An elephant walks to work to carry tourists up to the 16th century Amber Fort outside of Jaipur. Photograph: John Moore/Getty Images

India had proposed the nomination of Jaipur as an "exceptional urban example in indigenous city planning and construction in South Asia", before the World Heritage Committee, the Ministry of Culture said in a statement. "Besides an exemplary planning, its iconic monuments such as the Govind Dev temple, City Palace, Jantar Mantar and Hawa Mahal excel in artistic and architectural craftsmanship of the period."

Prime Minister Narendra Modi expressed happiness over the recognition. "Jaipur is a city associated with culture and valour. Elegant and energetic, Jaipur's hospitality draws people from all over. Glad that this city has been inscribed as a World Heritage Site by @UNESCO," Modi tweeted.

Rajasthan Chief Minister Ashok Gehlot said the recognition would boost tourism and benefit the local economy. "It is a matter of great pride that our Pink City, Jaipur has been declared as a world heritage site by UNESCO. It will add to the glory of capital city of Rajasthan," Gehlot tweeted.

The director of UNESCO India Office, Eric Falt, said the tag "celebrates yet another of India's outstanding heritage sites, only one year after the successful nomination of the Victorian Gothic and Art Deco Ensemble of Mumbai in 2018".

"I would like to wholeheartedly congratulate the government of India, the state of Rajasthan and the city of Jaipur on this successful nomination", Falt said.

A senior official said the International Council on Monuments and Sites had inspected the city in 2018 post the nomination.

"The fortified city of Jaipur, in India's northwestern state of Rajasthan was founded in 1727 by Sawai Jai Singh II. IMAGE: A view of the City Palace in the walled city centre in Jaipur. Photograph: Robert Cianflone/Getty Images

Unlike other cities in the region located in hilly terrain, Jaipur was established on the plain and built according to a grid plan interpreted in the light of Vedic architecture," the UNESCO India Office said in a statement.

"The city's urban planning shows an exchange of ideas from ancient Hindu and modern Mughal as well as Western cultures. The grid plan is a model that prevails in the West, while the organisation of the different districts refers to traditional Hindu concepts," the statement said.

"Designed to be a commercial capital, the city has maintained its local commercial, artisanal and cooperative traditions to this day," it added.

Myanmar's Bagan, Megalithic Jar Sites in Xiengkhuang - Plain of Jars in Laos and the Archaeological Ruins of Liangzhu City in China are among the other sites that were included in the World Heritage List on Saturday.

The countries that supported India's nomination are: Brazil, Bahrain, Cuba, Indonesia, Azerbaijan, Kuwait, Kyrgyzstan, Zimbabwe, China, Guatemala, Uganda, Tunisia, Burkina Faso, Bosnia and Herzegovina, Angola, St Kitts and Nevis. Australia and Norway initially proposed a referral, but, after the debate, they agreed for the inclusion of Jaipur, the ministry of culture said.

UNESCO seeks to encourage the identification, protection and preservation of cultural and natural heritage around the world considered to be of outstanding value to humanity. This is embodied in an international treaty called the Convention concerning the Protection of the World Cultural and Natural Heritage, adopted by UNESCO in 1972. 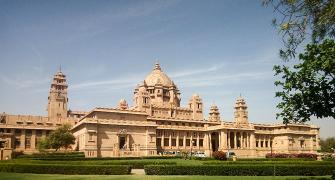 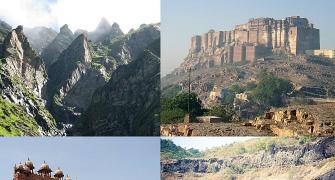 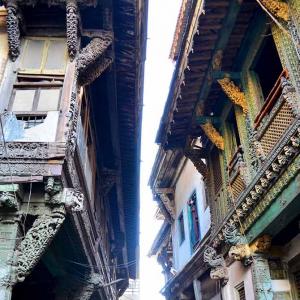