The pilots of the Pakistan International Airlines plane that crashed last month were not focussed and they were discussing coronavirus during the flight, the country's aviation minister told Parliament on Wednesday as he pointed out their "overconfidence and lack of concentration" as some of the reasons for the tragedy that killed 97 people on board. The domestic flight from Lahore to Karachi crashed in a residential area near the Jinnah International Airport in Karachi on May 22.

The Airbus A320 aircraft of the national carrier had 91 passengers and a crew of eight when it crashed into the Jinnah Garden area near Model Colony in Malir on Friday, minutes before its landing. One girl died on the ground after suffering burn injuries.

Federal minister for aviation Ghulam Sarwar Khan presented the interim investigation report on the PIA plane crash in the National Assembly, saying that the pilots were not focused and their lack of concentration had caused the crash.

Human error by the pilots and air traffic control caused the crash of the Pakistan International Airlines plane, he said.

The minister said that the pilots had ignored the instructions of the air traffic control on the height of the aircraft.

"The pilots and the ATC both did not follow the protocol," he said.

"The pilot ignored the instructions of the air traffic controllers and the ATC, on the other hand, did not inform the pilot about the engine colliding.

"The pilots were discussing corona throughout the flight. They were not focussed. They talked about corona [...] their families were affected. When the control tower asked him to increase the plane's height, the pilot said 'I'll manage'. There was overconfidence," he said.

Sarwar said that the cabin crew and ATC were also responsible for the tragedy.

"Those who are responsible will be held accountable," he said, promising that the complete investigation report will be presented in one year's time.

Sarwar said that the initial report pointed out that there was no technical fault with the aircraft and even the pilot had not said the same in his conversation with the air traffic controllers.

The minister noted that the aircraft touched the runway thrice without the landing gear which caused damage to its engines.

"When the plane took off again, both its engines had been damaged," he said.

Sarwar said that the conversation between the pilot and the air traffic controllers had been recorded and he had heard it himself.

The minister said that the equipment from the aircraft had been extracted and decoded. He said that the recording obtained would be made part of the final report of the PIA plane crash.

The minister said that 40 per cent of pilots of the national flag bearer were flying aircraft with fake licenses. He said that these pilots had not given the exams themselves nor did they have the proper flying experience, he added.

"Pilots are also appointed on a political basis, unfortunately," he said.

"Whilst appointing pilots, merit is ignored," he added, disclosing that degrees of four PIA pilots had been found out to be fake. 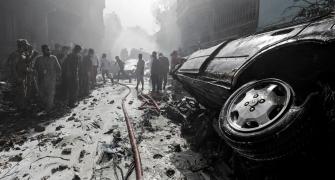 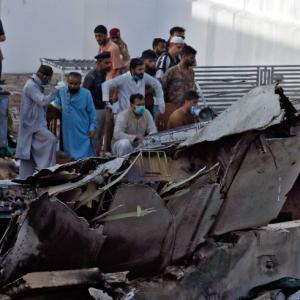 It was all fire & smoke: Witnesses on Pak plane crash