A draft legislation is ready for setting up a permanent water disputes tribunal to resolve the water related disputes among the states in an expeditious manner, new Water Resources Minister Harish Rawat disclosed on Tuesday after assuming the charge.

As regards the inter-linking of rivers, a project of the National Democratic Alliance regime dusted out by his predecessor Pawan Bansal only a few months for action, he said the proposal will be pursued with the state governments but it requires creation of a conducive atmosphere for fast implementation.

Rawat said he was also seeking a fresh date from the Prime Minister's Office to convene a meeting of National Water Resources Council to adopt the new National Water Policy and implement it in consultation with the states.

Interacting with reporters after assuming the charge, he set his top priority on increasing availability of water and its conservation.

Stressing that the water bodies in the states have to be preserved in active coordination with the states' governments, he said his ministry has formulated certain national projects which will be implemented on priority basis with 90 per cent Central assistance.

A number of state governments have been already petitioning the Centre to take up construction of dams in their states as the national projects, particularly where more than one state is involved in harnessing the rivers.
A correspondent in New Delhi
Related News: Harish Rawat, National Water Policy, National Democratic Alliance, National Water Resources Council, Pawan Bansal
Print this article
Gujarat, Andhra key factors in Cabinet reshuffle
Cabinet rejig won't do any good to country, Cong: BJP
Gujarat poll may postpone Parliament's winter session

Modi WILL BE PM candidate if he wins Guj polls: BJP 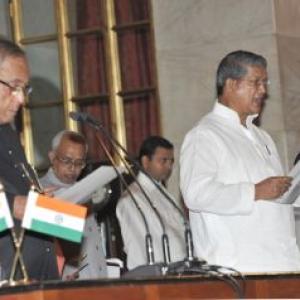