People will show BJP their place: Pawar on Lakhimpur violence

NCP supremo Sharad Pawar warned the BJP on Tuesday that it will have to pay a heavy price for the Lakhimpur Kheri incident and asserted that the entire opposition is with the farmers. Describing the violence as an "attack on farmers", Pawar, a former Union agriculture minister, said its responsibility lies with the BJP governments at the Centre and in Uttar Pradesh and the "people will show them their place."

"Whether it is government at the Centre or in Uttar Pradesh, they are not sensitive at all. The kind of situation that was created in Jallianwala Bagh, we are witnessing a similar situation in Uttar Pradesh. Today or tomorrow, they will have to pay a heavy price for it," he told reporters here, joining the chorus of criticism over the Sunday incident in which eight persons were killed.

Expressing anguish over the deaths, Pawar assured the farmers that the entire opposition is with them and will soon take a call on the future course of action.

He also demanded a probe by a sitting judge of the Supreme Court.

"I just want to tell them that they would not succeed in suppressing the farmers' voice. Farmers from the entire country are united and will fight against this misuse of power by those sitting in government," he said.

Pawar accused the BJP governments of being "insensitive", saying they are "not even ready to express grief over the death of farmers".

He also lashed out at the UP government for preventing opposition leaders, including MPs and chief ministers, from visiting Lakhimpur Kheri.

It is like murdering their fundamental rights in a democracy, he alleged.

"This can be done for a day or two but in the long term, they wouldn't succeed. People will show them their place," Pawar said while asserting that opposition is united on this issue.

The Shiv Sena and the Congress, along with NCP, jointly run the Maha Vikas Aghadi government in Maharashtra, after the Sena quit the BJP-led NDA alliance in 2019.

"Lakhimpur Kheri violence has shaken the nation, Priyanka Gandhi has been arrested by the UP government, opposition leaders are being restricted from meeting farmers. There is a need for joint opposition action against oppression by the Government in UP," Raut tweeted.

Eight people were killed Sunday as violence erupted during a farmers' protest claiming the lives of both farmers and BJP workers ahead of a visit to Lakhimpur.

Four of the dead were farmers, allegedly knocked down by vehicles driven by BJP workers. The others were BJP workers and a driver who were allegedly pulled out of the vehicles and lynched by the protesters.

The UP Police has lodged a case against Union minister Ajay Mishra's son but no arrest has been made so far. 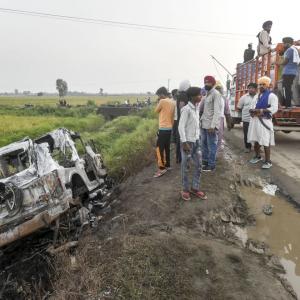