Pushing for President's rule in Uttar Pradesh, RLD chief Jayant Chaudhary on Tuesday said the entire state machinery under the Yogi Adityanath government is trying to suppress the truth of what happened in Lakhimpur Kheri and clamping down on the opposition. 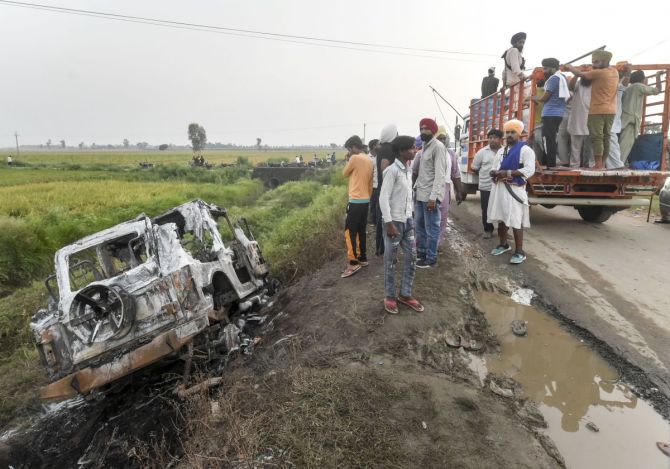 IMAGE: People take a look at the overturned SUV which was destroyed in Sunday's violence during farmers protest, at Tikonia area of Lakhimpur Kheri district, on Monday. Photograph: Nand Kumar/PTI Photo

The Rashtriya Lok Dal (RLD) president, one of the few leaders to reach the Uttar Pradesh district where eight people, including four farmers, were killed during a farmers' protest on Sunday, said he had to employ “guerrilla tactics” to do so.

"Reaching Lakhimpur was a tough task because Yogi has put the entire government machinery to work towards thwarting the Opposition. There needs to be a separation between the state and the party which is not there in UP… from the district magistrate to state-level officials, police, it seems everyone has taken membership of the BJP," Chaudhary alleged in a phone interview to PTI.

Chaudhary, who took 13 hours to reach Lakhimpur Kheri from Delhi, several hours more than it would take to cover the 420 km-odd distance, also met the families of some of the farmer victims to learn their story of loss.

All roads to Lakhimpur Kheri, about 130 km from Lucknow, have been blocked for opposition leaders with most, including Congress' Priyanka Gandhi Vadra and Bhupesh Baghel as well as SP chief Akhilesh Yadav, being stopped from entering the district.

It is a "worrisome trend" that no one in the bureaucracy has raised questions over orders given by the political class, Chaudhary said, adding that he was surprised to hear Additional Director General, Law and Order, Prashant Kumar saying that political people are not allowed in the district.

Four of the eight dead in Sunday's violence in Lakhimpur Kheri were farmers, allegedly knocked down by vehicles driven by BJP workers travelling to welcome Uttar Pradesh Deputy Chief Minister Keshav Prasad Maurya to an event in the area. The others were identified as BJP workers and their driver, allegedly pulled out of the vehicles and lynched by the protesters.

The Uttar Pradesh Police has lodged a case against Union Minister of State for Home Ajay Mishra's son Ashish but no arrest has been made so far.

Giving details of his journey to Lakhimpur Kheri,  glimpses of which he put out on Twitter, Chaudhary said it was a "tough journey" that meant walking some distance (his face covered with a ‘gamcha') and changing vehicles. He reached there Monday evening.

"I had to change many roads as soon as I got advance information that a particular road had been sealed. We could not communicate with anyone as we had switched off our telephones. I had to send people who were with me on a different route, so a lot of guerilla tactics had to be employed… it is again frightening to have to do those things," he said.

He backed the demand from some Opposition quarters to impose President's rule in the state.

The application of President's rule requires certain conditions, like the government not fulfilling its mandate and putting people's lives in danger, Chaudhary said, adding that the criteria was being met in Uttar Pradesh.

"The minister who is in-charge of the home department has egged on supporters to take on farmers.  His son after that had taken his vehicle and deliberately (mowed down farmers),  it was an intentional crime,  it was premeditated,  it was not spur of the moment or an accident," Chaudhary alleged.

He said the farmers told him that sticks were tied to the front of the vehicle that mowed down farmers for maximum impact, but clarified that he cannot verify the claim.

Hitting out at the Yogi government, Chaudhary said not one person who is part of the government has come out and said anything on the death of the farmers.

"Mr Maurya tweeted about Lakhimpur but is silent about the death of farmers.  Yogi-ji gave his usual one statement.  Apart from that, you feel almost the entire government machinery is working to suppress the (truth) of the incident," he said.

Referring to the videos of Congress leaders Priyanka Gandhi Vadra and Despender Hooda before their detention by police, the RLD chief said it was "shocking" how they were "manhandled".

In reference to Rajya Sabha MP Hooda, he said there are certain privileges that come with being a member of Parliament. In Chaudhary's view, the attitude and behaviour of the police amounted to "infringing on the right to parliamentary privilege".

Chaudhary also demanded that Prime Minister Narendra Modi, who was in Lucknow for an event on Tuesday, announce that Mishra has been sacked. The prime minister should also express regret for the "failures of his government", he said.

"The PM should also express regret that even after ten months, farmers are sitting on the road."

Talking about his meeting with victims' families, the RLD chief said a panchayat was being held when he reached the village in Lakhimpur Kheri.

"One of the things that the farmers pointed out to me was that they feared that they may get targeted.  The government has announced certain things and they had doubts how quickly that will get implemented.  They also did not want any cases to be filed against farmers and want strict action against the minister." he said.

"I met the family of the victim (Lavpreet),  he has two sisters,  a young mother. He was a young boy. The family doesn't have much support , they have less than two acre land holding, Basically, his father is a construction worker. That is how they are supporting themselves. But it is a very brave family," Chaudhary said.

The four deceased farmers were identified as Daljeet Singh (32) and Gurvinder Singh (20), both from Bahraich district, and Lavpreet Singh (20) of Chaukhada farm and Nachhatar Singh (65) from Nandapurwa village, both falling in Kheri.

In Lakhimpur Kheri, the additional director general, law and order, had announced that the government will order a probe headed by a retired high court judge and give compensation of Rs 45 lakh each to the families of the dead farmers. Their kin will also get a government job. The injured will get Rs 10 lakh. 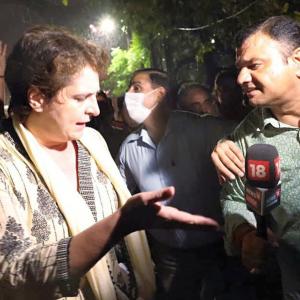 Priyanka booked by UP Police for 'disturbing peace'