'Will discipline you in 2 mins': MoS Mishra's video enraged farmers

A purported video of Union Minister of State for Home Ajay Kumar Mishra in which he is heard telling farmers that he would 'discipline' them in 'two minutes' appears to have angered them even before Sunday's violent clashes in Lakhimpur Kheri. 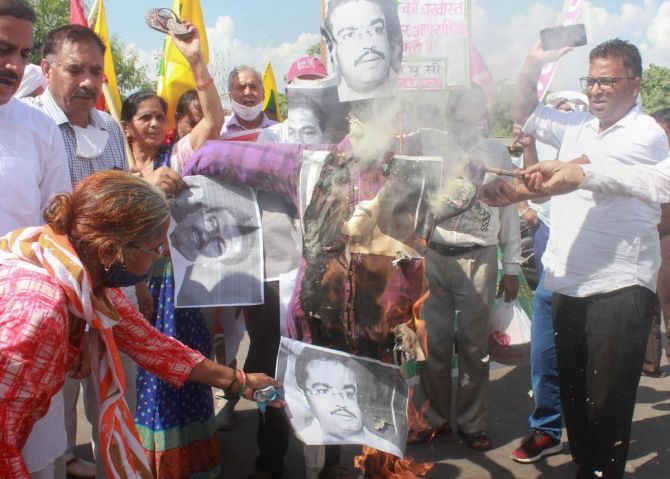 'Face me, it will take just two minutes to discipline you fellows,' the two-time Bharatiya Janata Party MP from Kheri is heard purportedly saying in the video, which had gone viral on social media before Sunday.

'I am not only a minister or an MP and MLA... People who know me even before I became a parliamentarian know that I never run away from taking on challenges. The day I accept a challenge you all will have to leave not only Palia (a local place in the district) but Lakhimpur itself,' Mishra is heard saying further in the video.

Bahujan Samaj Party president Mayawati on Monday took strong exception to Misra's purported statement and she alleged that it only reflects the 'dictatorial tendency' of the ruling party.

In a tweet in Hindi, the BSP president said, 'After the Union Minister of State for Home threatened farmers in Lakhimpur Kheri district to see them in two minutes, eight people died in a widespread violence there and in the meantime, such a disgusting statement of the CM of Haryana is a blatant anti-people statement and proves the dictatorial tendencies of the BJP government.'

Mayawati also referred to the Haryana Chief Minister Manohar Lal Khattar's 'tit for tat' remark during a meeting of the BJP's Kisan Morcha in Chandigarh on Sunday.

'The video of Haryana CM Khattar giving provocative instructions to BJP workers to go to jail and become leaders by giving a tit for tat reply to agitating farmers with sticks has gone viral. Any amount of condemnation of this statement of the CM instigating violence will be less,' the BSP president further said in her tweet.

According to sources, Ajay Kumar Mishra's speech came after some farmers showed him black flags in Palia locality in his Kheri Parliamentary constituency where he had gone to address a public meeting there late last month.

Farmers have been up in arms against him since then and the violence, resulting in eight deaths, erupted during the farmers' protest against the visit of Deputy Chief Minister Keshav Prasad Maurya in Mishra's native village Banbirpur on Sunday, they said.

Local farmer leader Gurmit Singh told a TV channel that on September 25, members of Krantikari Kisan Union and Bhartiya Kisan Union had shown black flags to Mishra following which the minister had threatened to deal with them.

He said upon coming to know about Maurya's programme, the farmers sat on a peaceful dharna near the helipad where he was scheduled to arrive.

When the farmers came to know that Maurya was coming by road, the farmers stood in protest at a three km stretch on his travel route in the course of which the dastardly incident happened the previous day, he added.

Singh alleged that Mishra's son and his supporters 'trampled farmers to death under the wheels of their SUVs'.

Farmer leaders had claimed that the minister's son Ashish Mishra was in one of the cars which allegedly knocked down some protesters who were opposing the deputy CM's visit.

Ajay Mishra said he and his son were not present at the spot as alleged by some farmer leaders and he has the photographs and video clips to prove it.

Ajay Mishra has also claimed that extremist organisations like the Babbar Khalsa have infiltrated the farmers' protest.

An FIR has been registered against Ashish Mishra and others in connection with the incident.

Some criminal cases including that of murder were lodged against 61-year-old Ajay Mishra in the past but he was cleared by the court from the murder allegation.

Starting his political innings as a panchayat member, Ajay Kumar Mishra was elected as a BJP MLA from the Vidhasan assembly seat in Lakhimpur Kheri district in 2012.

The party nominated him for the 2014 Lok Sabha polls from the Kheri seat which he won then and also in the last parliamentary election in 2019.

He was inducted by Prime Minister Narendra Modi into his Cabinet last July and given a key berth as the Minister of state for Home.

The saffron party projected him as a prominent Brahmin leader and organised several public meetings for him to drum up Brahmins' support in the upcoming state assembly election. 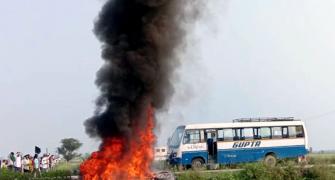 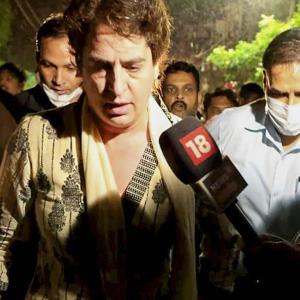 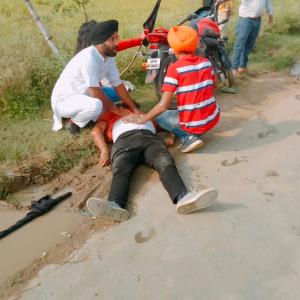 Tikait asks BJP men to stay away from UP villages