Modi also reminded the Congress of the Emergency, saying it's a blot on the democracy that will never fade. 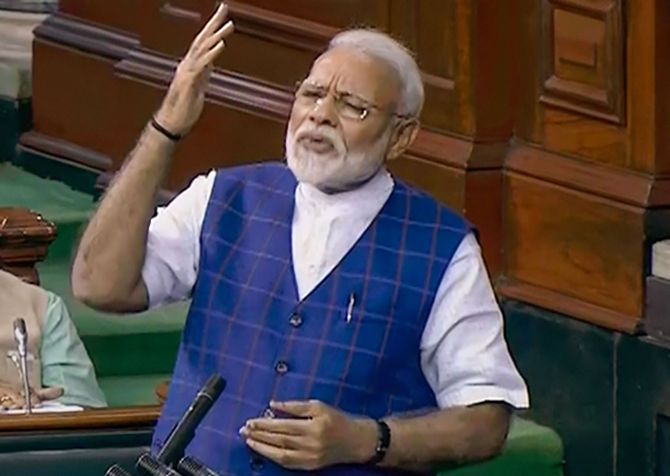 Accused by the Congress of not recognising its leaders' contribution, Prime Minister Narendra Modi on Tuesday launched a stinging counter-attack, saying the party cannot see beyond the Gandhi family and it began 'flying so high' that it was disconnected from the country's roots.

Modi said the Congress members did not mention even former prime minister Manmohan Singh's work in their speeches in Lok Sabha.

In his hour-long replying to a two-day debate on the Motion of Thanks to the President's Address in the House, which was later passed by a voice vote, Modi also called upon lawmakers to rise above partisan politics to build a new and modern India, saying the country was more important than politics.

He was, however, unsparing in his criticism of the Congress, targeting the party for not recognising the contributions of leaders outside its ruling Gandhi-Nehru family, missing opportunities to empower Muslim women and 'crushing India's soul' by imposing Emergency, whose anniversary fell on Tuesday.

Modi quoted a former minister in the Rajiv Gandhi-led Congress government, which brought a law to overrule the Supreme Court ruling on the Shah Bano case to placate Muslims, as saying recently that its leaders claimed that it was not the duty of their party to uplift Muslims and 'if they want to lie in gutter let them be'.

His remarks drew sharp protests from the Congress, prompting Modi to say that he will send them a YouTube link of the interview.

The Congress has missed many chances to empower Muslim women and has got one more opportunity, he said, in a reference to the triple talaq bill introduced in Lok Sabha by his government.

Turning the tables on it after its leader Adhir Ranjan Chowdhury said Modi cannot diminish his party's 'high' stature Modi said it became so high that it lost connect with the country's roots and that 'the higher you become, the happier I will be'.

"So busy were they with delusions of soaring high that they forgot to remain rooted to the ground. So busy were they soaring that they thought anyone on the ground is lowly and dirty. We have no such desire to soar. We are happy grounded, rooted and with our people," he said.

Mocking the Congress, the prime minister said he is being cursed for not putting its leaders in jail, an apparent reference to its top leaders Rahul and Sonia Gandhi, and then retorted that at least they are on bail and 'enjoying themselves'.

In his speech on Monday, Chowdhury had attacked the government over its criticism on the alleged 2G and coal scams, saying if Congress leaders were involved in corruption, then why Sonia Gandhi and Rahul were sitting in Parliament and not in jail.

Modi's reference to bail was a reference to the court's grant of bail to the two top Congress leaders in the National Herald case.

His government's fight against corruption will continue, he said but asserted that it will not work with vendetta and it was for courts to send the accused to jail.

"Some members asked- why is person A not in jail or person B not in jail. I want to tell them- this is not Emergency where Governments jailed people as it felt like. These decisions are taken by courts. Courts will decide on jail and bail," he said.

Targeting the Congress for repeatedly saying that his government does not recognise the contributions of its leaders, he said his dispensation gave Bharat Ratna to a veteran Congress leader like former president Pranab Mukherjee but the opposition party could not think about bestowing the same honour to former prime ministers and its leaders like P V Narasimha Rao and Manmohan Singh.

"Thus far and no further," he said, asking the Congress to not repeat this charge again. He had from the rampart of Red Fort acknowledged contributions of all prime ministers and other prominent leaders in the country's development, Modi pointed out.

Did the Congress government during 2004-14 ever recognise the work of the Vajpayee government, he asked and added that it did not acknowldge even the Rao government's contributions.

Your leaders in their speeches during the debate did not even mention Manmohan Singh, he said.

Noting that it was Emergency's 44th anniversary on Tuesday, he said it trampled over the spirit of the Constitution, gagged the media and bullied the judiciary.

"We can't forget those dark days," he said, attacking the Congress.

He also quoted first prime minister Jawaharlal Nehru, who has often been at the receiving end of his criticism in the past, describing him as a great and asking lawmakers to work together to create a sense of duty in the society as well.

The Bharatiya Janata Party-led National Democratic Alliance' win in the recent Lok Sabha polls with a bigger mandate than the 2014 elections showed that people had approved of its work after testing it on all parameters.

In 2014, people voted for his party as they wanted to give him a chance also to get rid of the Congress-led United Progressive Alliance but they backed his government this time due to its work, he said.

With his pet project Make in India often questioned by critics for its output, the prime minister said it is the need of the hour.

India had 18 ordnance factories when it became independent but it now depends on import for its defence needs while China, which was 'zero' in 1947, is exporting military equipment and arsenal, the prime minister said.

"Let it be our collective endeavour to make India a five trillion dollar economy," he said.

Modi said his government had taken a number of important decisions since coming to power last month for a second term.

"The decisions we have taken will benefit farmers, traders, youngsters and other sections of society," he said.

Invoking the upcoming 150th birth anniversary of Mahatma Gandhi, whom he described as the country's greatest inspiration, and the following 75th anniversary of India's freedom in 2022, he asked lawmakers to rise above politics and party lines to build a new and modern India.

"Today, we have to live for the nation and build together the India our freedom fighters dreamt of," he said.

He also stressed on the need to conserve water, and referred to socialist leader Ram Manohar Lohia's stress on ensuring 'pani and paikhana' (water and toilet) for the poor, especially women.

His government had worked to build toilets and will now focus on water, he said.

The Congress panned Modi's reply to the Motion of Thanks to the President's address, alleging that he resorted to 'old evading tactics' to hoodwink the common people as if he was still in election mode and failed to address the real issues.

Congress leader in the Lok Sabha Adhir Ranjan Chowdhury claimed that his party scored a 'great victory' as the prime minister, who was previously 'reluctant' to quote any Congress leader, was 'compelled' to repeat Jawaharlal Nehru's words at the fag end of his speech.

"Prime Minister in his own reply has disappointed the people of our country by not taking up issues concerning the people, right from agriculture to industry to unemployment and last but not the least Bihar's encephalitis situation where hundreds of children have lost their lives," Chowdhury told reporters.

"He resorted to old evading tactics to hoodwink the common people, as if he was still in election mode. We expected that he would rise above partisan issues and would be conciliatory in taking all along," he said.

"We also noted that Prime Minister was drawn into our incisive argument, and had to quote Jawahar Lal Nehru ji at the fag end of his speech. I think, that is a great victory for us!" Chowdhury said.

Source: PTI© Copyright 2021 PTI. All rights reserved. Republication or redistribution of PTI content, including by framing or similar means, is expressly prohibited without the prior written consent.
Related News: Narendra Modi, Congress of the Emergency, Lok Sabha, NDA, UPA
SHARE THIS STORY
Print this article