Anti-incumbency against Chief Minister Nitish Kumar's 15-year-old rule in Bihar is stronger that what Lalu Prasad Yadav-led Rashtriya Janata Dal regime faced in 2005, Lok Janshakti Party president Chirag Paswan said on Monday, asserting that he walked out of the ruling alliance in the state so as not to have any 'guilt' of playing a role in continuation of the current dispensation. He also said people of Bihar have decided they do not want to see Kumar to return as chief minister and alleged that the Janata Dal-United leader's sole focus was continuing at the helm, rather than working for the state's welfare.

In a hard-hitting attack, Paswan said Kumar's long rule has delivered 'nothing' and Bihar will get an actual 'double-engine' government, which Prime Minister Naendra Modi has often spoken about, when a Bharatiya Janata Party-led dispensation comes to power after the assembly polls.

In an interview to PTI, Paswan also refuted suggestions about his own chief ministerial ambitions and asserted that his party wants the BJP to lead the government after the polls, which are scheduled to start from October 28.

He heaped praise on the prime minister and noted that he had in 2013 an option of choosing between him and Kumar, who had then quit the National Democratic Alliance against Modi's projection as its prime ministerial candidate, and he had chosen the BJP leader over the chief minister.

"I have been consistent in my support, belief and admiration for the prime minister since I fought my first election in 2014. It is Nitish Kumar who has been fluctuating in his stand.

"He joined hands with Lalu Prasad and then joined the NDA in 2017. He keeps thinking as how he can continue to be chief minister rather than working for the state's development," he said.

Paswan said he never had any belief in Kumar's leadership.

Kumar has been Bihar's chief minister since 2005, except for a brief period after the 2014 Lok Sabha polls when he installed Jitan Ram Manjhi at the helm after the JD-U was routed in the general elections.

Before Kumar, RJD had ruled the state for 15 years.

The LJP had on Sunday announced its decision to leave the NDA in Bihar, saying it cannot accept Kumar's leadership.

The BJP, the principal member of the NDA, has already projected the JD-U president as the alliance's chief ministerial candidate for the polls, scheduled to be held in three phases on October 28, November 3 and November 7.

The results are expected on November 10.

The LJP chief asserted that his party's likely share of seats if it had continued in the NDA had no role in this decision which, he said, was solely driven the fact that his 'Bihar first, Bihari first' vision document was not incorporated by Kumar in his future governance agenda.

Kumar's 'saat nischay' (seven resolves) agenda was drafted when the JD-U was in alliance with the RJD and the Congress in 2015, and now he has announced that he will work on similar lines if the ruling alliance is voted to power again, Paswan said.

"I wanted my agenda should also be part of the government's functioning. His decision left no space for my party... I was very clear then that I do not want to see him as chief minister again," he said.

Speaking of his several meetings with BJP leaders, including its president J P Nadda and Home Minister Amit Shah, he said he had been asking them to 'free me and allow me to contest against Nitish Kumar because I do not want to go with his agenda of governance'.

Kumar has been at the helm all these years because of a lack of alternative, Paswan said and noted that people of the state now have many options to choose from as there are several smaller alliance in the fray.

"Let the people of Bihar decide. One thing they have decided that they do not want to see today's chief minister again at the helm after the polls," he said.

Asked how he reconciles his support to the BJP with the saffron party's backing of Kumar, he said every party is free to decide their agenda and he is fine with that.

The LJP, he added, had done its best in the February 2005 assembly polls when it had polled more than 12 per cent votes by fighting independently.

His party is now organisationally stronger and has a clearer vision for the state, he said, expressing confidence that people will back it in the seats where it contests.

The LJP will not put up candidates against the BJP. 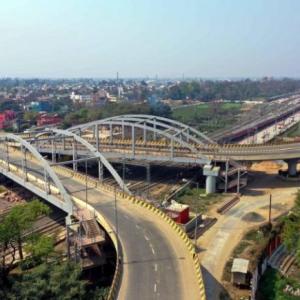