The standoff between the government and the opposition over the Rafale issue disrupted Parliament proceedings again as both Houses were adjourned on Tuesday amid relentless protests and heated exchanges involving both sides. 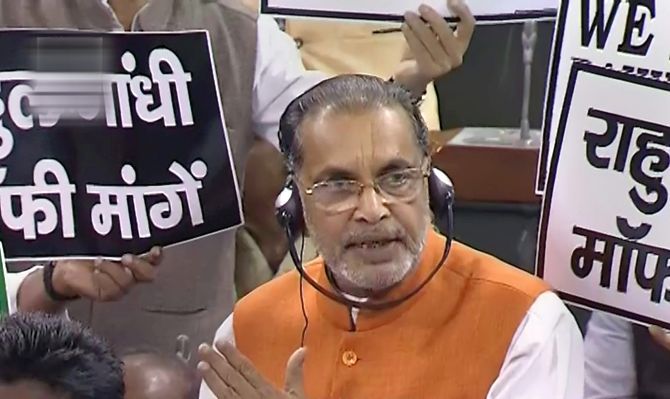 In the din, the National Institute of Design (Amendment) Bill, 2018 was introduced in the House. The bill seeks to declare the various NIDs as institutions of national importance.

In the Rajya Sabha too, Chairman Venkaiah Naidu urged the members to allow the House to function as various notices on urgent matters, ranging from cyclones affecting lives in some states to price rise to agriculture crisis, have been admitted for discussion.

However, soon after the papers were laid by the ministers, members from the two major political parties of Tamil Nadu -- AIADMK and DMK -- trooped into the Well of the House, carrying placards and shouting slogans against construction of a dam on Cauvery river.

Some members from Andhra Pradesh were also seen displaying placards demanding special status for the state.

Amid the sloganeering, Leader of the Opposition in the upper house Gulam Nabi Azad said the privilege motion moved by the opposition against the government should be taken up for allegedly misleading Parliament and the Supreme Court on Rafale deal.

In the Lok Sabha, upset with the disruption of proceedings, Mahajan said the members were well aware that this was an important session as everyone will face elections after this.

She said the government was ready for discussion, but the ruckus continued.

"This does not send a good message and we have to face the public," she said.

Mahajan lamented that people from other countries were questioning as to "what was happening in our country".

"I got a message that school kids are better than us. Are we worse than school kids?" she said.

Congress leader Mallikarjun Kharge said even they were ready for discussion, but demanded formation of a JPC to probe the Rafale deal so that every file related to the matter can be scrutinised.

To this Mahajan said that constitution of JPC was not under her purview.

The Lok Sabha proceedings barely lasted for five minutes and it was initially adjourned till noon. As the ruckus continued, only one query related to production of garlic was taken up during the Question Hour.

Later, Parliamentary Affairs Minister Narendra Singh Tomar said the Supreme Court verdict has made things clear, indicating that there was no need for a JPC on the controversial issue.

Unhappy with the response, Congress members again started raising slogans, following which the House was adjourned for the day.

The lower house has been witnessing daily disruptions since the winter session began last week. It had passed a bill on transgender rights on Monday.

In the Rajya Sabha, Azad alleged the government has misled Parliament and the Supreme Court on the issue, triggering vociferous protests from the treasury benches.

The senior Congress leader said the government has no right to continue in office and "should go".

Naidu, however, said that the Chair should be allowed to take a view on the Privilege notice.

The Congress had given the notice demanding an explanation from the government on why it provided the Supreme Court "wrong" information on the purchase of Rafale fighter jet from a French company.

Countering Azad, Minister of State for Parliamentary Affairs Vijay Goel said the government was ready to discuss all issues, including Rafale.

He demanded that the Congress apologise in the wake of the apex court's refusal to order an SIT probe in Rafale deal and Sajjan Kumar's conviction by the Delhi High Court in a 1984 anti-Sikh riots case.

As slogan shouting by the AIADMK and DMK members continued in the Well of the House, Naidu adjourned the House till 2 pm.

When the House resumed in the afternoon, Naidu proposed to discuss a calling attention on the situation arising due to devastation caused by cyclones Gaja and Titli in some states and the action taken by the government in this regard.

However, senior Congress leader Anand Sharma raised a point of order claiming that Minister of State for Parliamentary Affairs had referred to Rahul Gandhi and it is against the rule to demand his apology because he is member of other House.

Soon after, the ruling party member again started raising slogans and demanded apology from Gandhi while some of the AIADMK and DMK members trooped into the well to protest over Cauvery issue.

Naidu said that there is no point of order in the matter and asked the member to discuss the serious issues mainly related farmers which are a problem not only in Tamil Naidu but across the country.

As the members did not relent, he adjourned the House for the day. 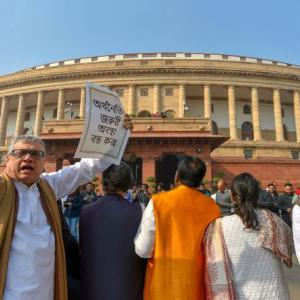