Parliament on Friday expressed alarm at the fear psychosis that has gripped people from northeast in some other parts of the country, with Prime Minister Manmohan Singh warning stern action against those behind the 'most reprehensible' act of creating insecurity.

Both Houses of Parliament showed solidarity with the people of northeast, with Rajya Sabha adopting a resolution demanding a thorough probe into the spread of rumours that have created panic.

Singh asserted that the government would do everything to control the situation and provide security to people of northeast as he decried use of incidents of Assam and other areas as an excuse for fanning rumours and creating insecurity.

Speaking on the burning issue in both Houses, he said the northeast region was 'a very sensitive issue' and said those spreading rumours would be brought to book. He urged the people to maintain unity and integrity of the country.

His remarks came as Parliament, rising above party politics, spoke in unison against the panic created among people from northeast in states like Karnataka, Andhra Pradesh, Maharashtra and Tamil Nadu.

Both the Houses took up impromptu debate on the issue amid demands for suspension of Question Hour. While Question Hour was suspended in the Upper House, Kumar took up the issue without any suspension in the Lok Sabha.

The Rajya Sabha passed a resolution declaring that it was one with the people of Northeast and shared concern over the fleeing of people from different parts of the country.

In the Lok Sabha, Speaker Meira Kumar thanked all political parties in helping send an unmistakable signal of Lok Sabha's solidarity with the people.

"We will do everything to provide them security," Singh said, terming as 'most reprehensible' the growing sense of insecurity among them.

"The northeastern region of our country is a very sensitive region, but one thing that I would like to say that whatever may have happened in Kokrajhar and other areas should not be used as an occasion to fan rumours to create an environment in other parts of our country that the people of the northeast feel insecure," said the Prime Minister, who represents Assam in the Rajya Sabha.

Cautioning that communal harmony as well as unity and integrity of the country was at stake, he said miscreants spreading rumours that have led to panic among people belonging to northeast would be brought to book.

"We must curb all the elements which are out to create trouble on this sensitive issue," he said, adding a message has to be sent out to all those who want to disturb peace.

"We should send a clear message that we will do everything to provide security to people from Northeast living in various parts of the country," he said, amid assertion that they have 'as much right' as anybody else to study and work in any part of the country.

Singh said his government would work with all 'like-minded' people to bring the situation under control without any loss of time.

Singh urged the people to maintain unity and integrity of the country. The people are one and 'we will do everything to provide them security'," he said, adding it was duty of everyone to create an atmosphere where rumour mongering will come to an end.

The government will create a feeling of security among people of northeast in every part of the country, he said.

Singh said he was in touch with the chief ministers of various states who assured him that 'we will do our utmost to ensure that our friends, our children and our citizens from the northeast feel secure in any part and every part' of our country.

prompt action to check the spread of violence. However, rumour mongering was a major cause for the panic among them.

Assuring the House that he would ask all states to take preventive action wherever necessary, Shinde said he had asked the director of Intelligence Bureau to trace the source of the SMSes and internet sites such as Facebook and Youtube that appeared to be the cause of the trouble.

Announcing that 170 persons had been arrested for the violence in Kokrajhar and other areas of Assam, 24 in Mumbai and 13 in Pune, he appealed to all those who had left their places of work and studies and fled to the northeast to return and continue with their normal lives.

The debate saw members cutting across party lines asking the government to come down heavily against those behind the incidents as also rumour-mongering.

Communist Party of India leader Gurudas Dasgupta accused the government of not being hard in tackling the situation and said 'sweet appeals do not make sense to the villains. Our words must match our deeds'. He warned that if timely action was not taken, it would give a fillip to the terrorist movement in the northeast.

He said all this was being done 'with an eye on the 2014 Lok Sabha elections' as some people wanted to gain political mileage out of it.

Nama Nageshwar Rao (Telugu Desam Party) as also M Thambidurai (All India Anna Dravida Munetra Kazhagam) condemned the incidents and said the people of the northeast were 'our brothers' and both the Central and State governments should take all steps to protect their lives and property.

Mehboob Baig (National Conference) warned against politicisation or sensationalisation of such issues and sought long-term solutions to problems in the Northeast.

Lamenting that, like in Kashmir, the problems of northeast have been allowed to linger for long, he suggested that government should take a relook at Assam Accord and other such agreements to make them suit the present needs.

T Meinya (Congress) and Prem Das Rai (Sikkim Democratic Front) sought stringent action against the perpetrators of violence and the rumour-mongers, while Bijoya Chakraborty (BJP) wondered where Hindus from Assam should go as there has been 'majority of Bangladeshi people' in 14 of the 27 districts of the state.

In the Rajya Sabha, Leader of the Opposition Arun Jaitley said a fear psychosis was being created among northeastern people and it was 'an onerous responsibility on each one of us to make sure that this panic situation, this rumour mongering, comes to an end'.

The Central and State governments and all political parties should speak in one language and make sure that, "This exodus stops immediately and those who have been misled to go back, return to their place of work and study," he said.

Ram Vilas Paswan (Lok Janshakti Party) and M P Achuthan (CPI) urged the government to unmask the conspiracy behind events, while Barun Mukherji (All India Forward Bloc) said the situation should be dealt 'on a war footing'. 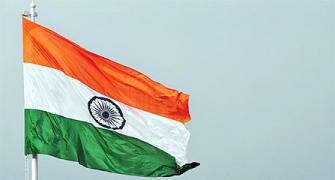 PM to north-east: India is your country, have no fear