The Modi government finally dropped its big Kashmir bomb on Monday, with Home Minister Amit Shah moving to revoke two key constitutional provisions -- Article 370 and Article 35(A) -- that give Jammu and Kashmir a host of special rights.

With the situation now on a knife's edge, here is what the momentous decision would mean for Jammu and Kashmir and for the country in general. 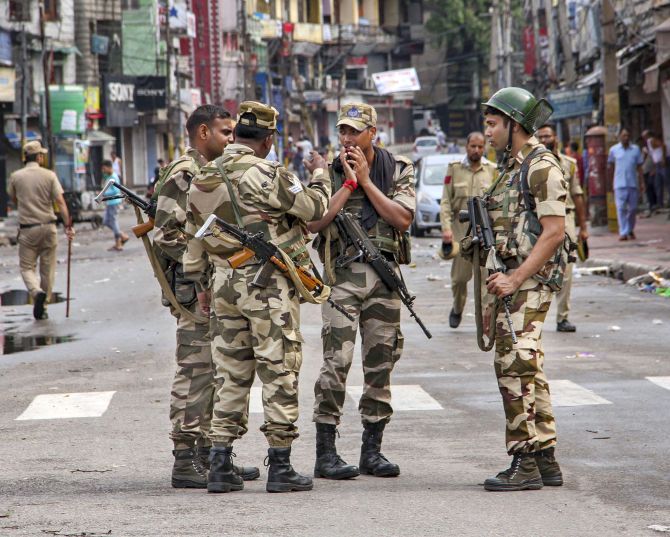 IMAGE: Army personnel stand guard during restrictions, in Jammu. Photograph: PTI Photo
1.
Under Article 370, the Centre needed the state government's concurrence to apply laws -- except in defence, foreign affairs, finance and communications. Those special powers are gone.
2.
Residents of Jammu and Kashmir enjoyed dual citizenship which they lost if they married outside the state. There will be no dual citizenship from now.
3.
Jammu and Kashmir had its own flag and own constitution. That will no longer remain and it will come under the national tricolour flag.
4.
Non-residents will now be able to settle in the state, buy land, and take up government jobs or scholarships..
5.
Under Article 370, the Centre had no power to declare financial emergency under Article 360 in the state. It could declare an emergency in the state only in case of war or external aggression. That no longer applies.
6.
The Right to Information Act, which wasn't previously applicable, will now come into force.
AGENCIES
Related News: Kashmir, Jammu, Modi
SHARE THIS STORY
Print this article