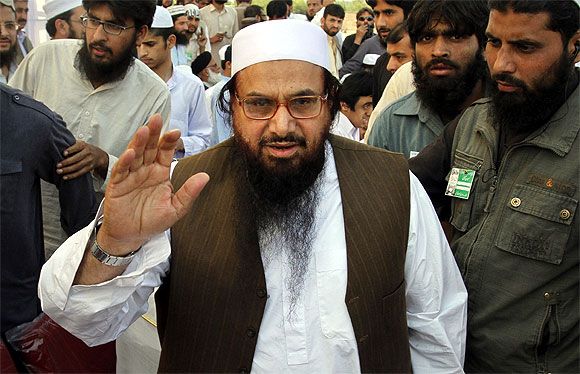 Pakistani authorities on Wednesday booked 26/11 Mumbai attacks mastermind Hafiz Saeed and his 12 accomplices for 'terrorism financing' in 23 cases, amidst growing international pressure on Islamabad to act against terror groups.

Pakistan counter-terrorism department (CTD) said it has registered 23 cases against the chief of the Jamaat-ud-Dawa (JuD) and 12 aides for using five trusts to 'raise funds for terrorism financing'.

Express Tribune reported that the CTD has accused the men of 'promoting terrorism and raising funds to facilitate terror activities'.

As per the charges, these proscribed outfits were operating under the guise of charities and were involved in funnelling funds to terror suspects.

The action came ahead of the crucial financial bailout meeting between Pakistan and the International Monetary Fund in Washington on Wednesday.

The executive board of IMF is expected to decide the fate of the proposed $ 6 billion bailout package to Pakistan on Wednesday.

Earlier in February, Pakistan had re-instated a ban on two charities linked to Saeed, namely Jamat-ud-Dawa and its charity wing Falah-e-Insaniat Foundation, amid global pressure to clamp down on the terror groups following the Pulwama terror attack that killed 40 CRPF personnel.

Saeed has been a mastermind behind numerous terror attacks, including 26/11 attacks on Mumbai in 2008 that killed scores of people.

Washington also announced a $ 10 million bounty on his head.

M Zulqernain
Source: PTI© Copyright 2023 PTI. All rights reserved. Republication or redistribution of PTI content, including by framing or similar means, is expressly prohibited without the prior written consent.
Print this article