News
Business
Movies
Sports
Cricket
Get Ahead
Money Tips
Shopping
Sign in  |  Create a Rediffmail account
Rediff.com  » News » Once upon a Ganpati in Tilak Nagar

Once upon a Ganpati in Tilak Nagar

The ‘Chhota don’ Rajan Nikhalje may be down but certainly not out. And the same can be said of the Ganesh pandal once patronised by him, reports Anil Singh. If the clout of Mumbai’s underworld dons is to be measured by their Ganesha pandals, Chhota Rajan is clearly down but not out. He may be lodged in Tihar jail but the Ganesh pandal in Tilak Nagar, Chembur, where he grew up, is still drawing crowds though nowhere as large as those in his heyday.

At 4.30 pm on Friday there were some 400 people in the queue which entailed a waiting time of 20 minutes, nothing compared to the hours that devotees spend for a darshan of the Lalbaugcha Raj in central Mumbai. Yet, such is the expectation from the Tilak Nagar pandal that some were hoping to see live pandas.

This year’s theme for the pandal is Panda Village, as seen in the Hollywood blockbuster Kung Fu Panda. Designed by Bollywood art director Prasoonjit Chanda, the pandal has eye-catching decoration and lighting, with Kung Fu Panda and his pals in various poses in an air-conditioned hall twice the size of a badminton court. It cost Rs 20 lakh, said Jaya Shetty, vice-president of Sahyadri Krida Mandal, a trust which puts up the pandal.

Not only was the exterior impressive, the interiors of these pandals were rich in detail. Mumbai had never seen anything like this in a Ganesha pandal. The mandal boasted that the artists were sent on study tours of the monuments to be replicated. Lakhs flocked to Tilak Nagar every year for the spectacle.

Shetty, as other office-bearers of Sahyadri Krida Mandal before him, deny that Chhota Rajan funds their Ganesha pandal and claims that they rely on donations. “We don’t even have to go from door to door for donations, the secretaries of the housing societies themselves come to us,” he said. Shetty did not mention that the old residents of Tilak Nagar have always had their own Ganesha pandal, distinct from the one put up by the Sahyadri Krida Mandal. The mandal’s claim is also belied by full-page photographs of Rajan’s wife and children in its glossy souvenir booklets over the years. Rahul Walunj, the current president and trustee of the mandal, is Rajan’s brother-in-law. Posters near the pandal display his status as the vice- president of the BJP’s Bharatiya Kamgar Sena.

The Sahyadri Krida Mandal was formed by Rajan’s mentor, Rajan Nair alias Bada Rajan in 1975 when Tilak Nagar was a housing board colony. After Nair was gunned down in 1983 by a friend-turned-foe, he was succeeded by Rajendra Nikhalje alias Chhota Rajan, a textile mill worker’s son who began as a cinema ticket tout. Teaming up with another upcoming Maharashtrian mobster, Dawood Ibrahim, Chhota Rajan was to virtually rule the eastern suburbs of Mumbai for two decades.

Bada Rajan learnt to exploit Ganesha pandals from fellow South Indian don Varadarajan Mudaliar, one of the troika of the original godfathers along with Karim Lala and Haji Mastan. Varada bhai, as he was called, hosted a grand Ganesha pandal bang outside Matunga railway station with VIP guests from politics to films to sports thronging it till deputy police commissioner Y C Pawar cracked down on it by limiting the size of the pandal.

Twenty years later, as additional commissioner of Mumbai’s eastern suburbs, Pawar used the same ploy against Rajan. The Sahyadri Krida Mandal also was to come under legal scrutiny. Based on my report in The Times of India, judge A P Bhangale of the special court dealing with Maharashtra Control of Organised Crime Act in August 2001 ordered a suo motu inquiry into the funding of the pandal.

Though the 2001 probe failed to establish a conclusive link between Rajan and the funding of the Tilak Nagar pandal, it helped the police impose further restrictions on the size of the pandal. One year, deputy municipal commissioner G R Khairnar, known as the demolition man, razed part of the pandal when it exceeded the allocated space. By this time Rajan had fallen out with Dawood and the ensuing gang war cost the life of prominent builder Om Prakash Kukreja, believed to be a major source of funds for Rajan.

Insiders say that the Mumbai police always treated the Dawood gang, especially Chhota Rajan, with kid gloves. Indeed, one of the guests of honour at the Tilak Nagar pandal in the late ’eighties was Inspector-General of Police Shivajirao Baraokar, who went on to become the director-general of Maharashtra police.

It is no secret that the Intelligence Bureau relied on Rajan to counter Dawood after the Mumbai serial blasts of 1993. Perhaps it is this factor, and not some clever accounting of the pandal’s funding as is widely believed, that has helped the Tilak Nagar Ganesh pandal survive to the extent that it boasts of being a finalist in the Utsav Moorti Samman competition of the Times of India. On Friday afternoon, it was even covered by the Aastha television channel. 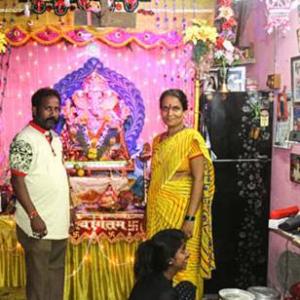 Ganpati@home: From Bhayandar to Belgaum