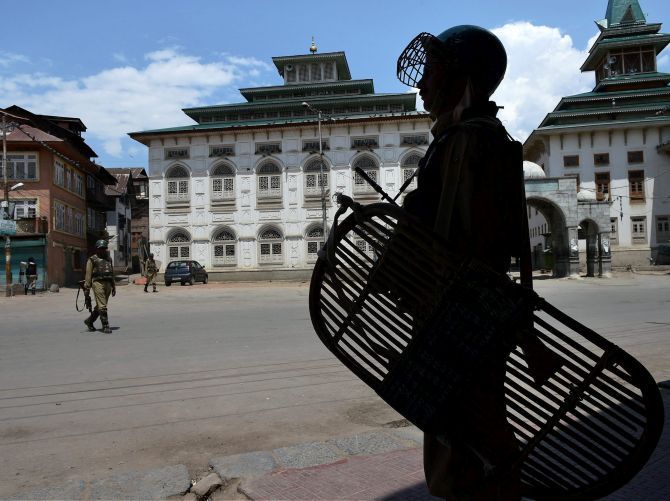 Normal life remained paralysed in Kashmir for the 24th consecutive day on Monday as curfew continued in some parts while restrictions were in effect in rest of the Valley to maintain law and order.

Curfew remained in force in five police station areas of the city and Anantnag town. Restrictions on assembly of four or more persons continued in entire Kashmir, a police official said.

“Curfew is in place only in five police station areas of Srinagar city -- Nowhatta, Khanyar, Rainawari, Safakadal and Maharajgunj,” he said.

Normal life remained disrupted for the 24th consecutive day due to the strike call given by separatists against civilian deaths during the protests which erupted after the killing of Hizbul Mujahideen commander Burhan Wani in an encounter with security forces on July 8.

Shops, schools, colleges, business establishments and private offices remained closed while public transport remained off the roads in the Valley which is reeling under
the violence that has left 49 persons dead and over 5,600 persons injured.

Mobile internet services continued to remain snapped in the entire Valley where the post-paid mobile telephony services have been restored across all networks. The incoming facility on prepaid connections was also restored, but the outgoing calls are barred on such numbers.

The separatist camp has extended the shutdown call in Kashmir till August 5, calling for a march to Hazratbal shrine on Friday.