The women who made India proud in Tokyo are set to be the Independence Day mascots.
Invite from the PM has already gone out to these achievers to be guests of honour on August 15.
Nivedita Mookerji reports.

IMAGE: Subedar Neeraj Chopra of the Indian Army ended India's 125-year wait for an athletics Olympic medal when he won Gold in the Javelin competion at the Tokyo Olympics. Photograph: Christian Petersen/Getty Images

The prime minister's second Independence Day speech since the pandemic is sure to revisit at least three key points -- vaccination, vocal for local (Aatmanirbhar Bharat) and women power -- that were made on August 15, 2020.

But this time, while entering the 75th year of independence, the script around these themes could be quite different in spirit.

With no end in sight yet, COVID-19 is likely to dominate the narrative like last year. The number of Covid cases has increased by around 15 times and the number of deaths caused by the infection by almost nine times in the last one year.

From a Covid tally of 2.5 million cases by Independence Day last year, the number has risen to around 32 million now.

Last year this time, India's coronavirus death toll was the fourth highest after the United States, Brazil and Mexico. Now, India ranks third after the US and Brazil in terms of deaths and second in terms of the number of cases.

Against that backdrop, the speech could elaborate on vaccines -- a point that came across emphatically in the August 15 speech last year too, when India had no jabs.

This is what the PM had said: 'My dear countrymen, there is a curiosity among everybody when the corona vaccine will be ready... I would like to tell my countrymen that our scientists are dutifully engaged in the laboratories... At present, testing for three vaccines is in different stages in the country.

One year later, India has vaccinated less than 10 per cent of its eligible population, against more than 50 per cent in the US and around 20 per cent in Brazil. The country needs to vaccinate more than nine million a day to be able to inoculate all adults by the end of this year. In July, the average daily vaccination was a little over four million.

So, it's quite possible that the PM might talk of dealing with vaccine hesitancy, improving the delivery in remote areas as well as facilitating foreign vaccine makers such as Pfizer and Moderna to come into India without any further delay to minimise the impact of a likely third wave.

Foreign vaccines bring us to the subject of vocal for local. Last Independence Day, this is what the PM had to say from the ramparts of Red Fort. 'Come, let's pledge that as we move towards the 75th year of our Independence, we shall adopt the talisman of "vocal for local"...'

He had also said that during the pandemic 'We were in need of many items which we needed to import but the world was unable to provide them. The youth of our nation, our entrepreneurs, the industry accepted the challenge.'

He elaborated on how the country got into manufacturing N-95, PPE kits and ventilators. 'We are not only able to meet our own requirements, but have now also become strong enough to export to the world.’'

Within a few months when a deadly second wave devastated the country, India got help from around the world. Planes with oxygen cylinders flew in from so many countries to help save patients.

While India was forced to stop its vaccine diplomacy midway, it started getting jabs from others after the second wave. So any mention of self-reliance and celebration of local products could be a bit tempered this Independence Day.

Another topic that's very likely to be a part of the PM's speech is women power -- the excellent show by women at the Olympics being the highlight.

This is what he said last Independence Day. 'I have confidence in our youth and the country's unparalleled women power.' And also this: 'Whenever opportunities were given to women power in India, they have brought glory to the country and have strengthened the country...'

This time, the women who made India proud in Tokyo are set to be the Independence Day mascots. Invite from the PM has already gone out to these achievers to be guests of honour on August 15. 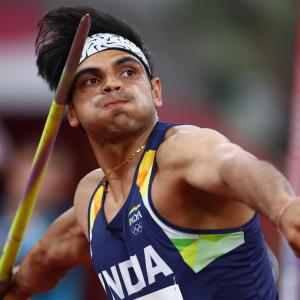