The National Socialist Council of Nagaland-Isak Muivah has demanded direct involvement of Prime Minister Narenda Modi in the talks to resolve the festering insurgency in the northeastern state and insisted that the negotiations be held in a 'third country'. 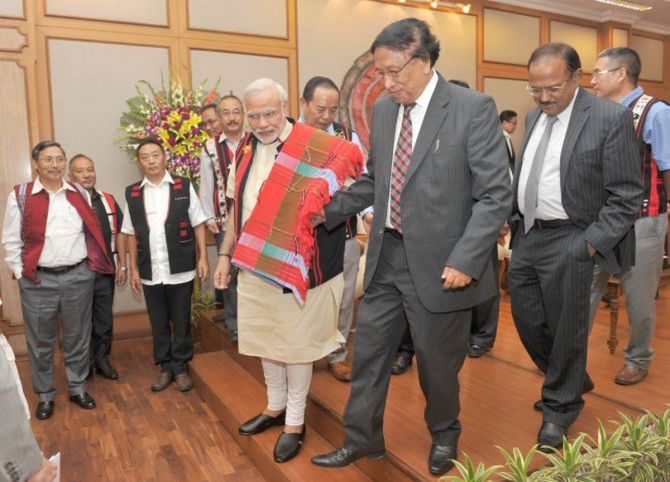 IMAGE: Prime Minister Narendra Modi with NSCN-IM general secretary Thuingaleng Muivah at the signing ceremony of the historic peace accord between the Government of India and the group in New Delhi, in 2015. Photograph: Press Information Bureau of India

In a letter to Prime Minister Narendra Modi written on February 25, but kept secret so far, Thuingaleng Muivah, the general secretary of the group and chief Naga negotiator in the talks with the government, also spoke about the framework agreement (FA) signed in 2015 and its proposal that the state should be allowed to have a Constitution and national flag.

In the letter released to the media on Monday, the outfit said it was making public the letter for 'lack of response' from the Prime Minister's Office (PMO).

Muivah, who is the Ato Kilonser (prime minister) of the self-styled Naga government, referred to the circumstances in which he and the then chairman of the outfit Isak Chishi Swu first arrived in India in 2002 and 'patiently' stayed here since 2010 to conclude an 'acceptable and honourable political settlement'.

He said the NSCN-IM started political negotiation with the government only after it recognised the Naga problem as a 'political issue' and stopped calling it India's internal law and order issue.

Referring to the framework agreement, Muivah said, 'We mentioned in our proposal that Nagaland shall use its National Flag, Anthem, Emblem and Insignia' and have a Constitution called 'Yehzabo'.

Though Muivah said it was not a 'demand', his letter spoke about how 'sovereignty lies with the people' and the 'peaceful co-existence' of 'two entities' through 'sharing of sovereign power'.

Talking about the delay in implementing the framework agreement, Muivah said, 'In the given circumstances and in order to save the political dialogue, the talks should resume at the highest i.e. prime minister level, without precondition, and outside India in a third country.'

Muivah also wrote about the 'obnoxious' conduct of the Ministry of Home Affairs while dealing with the Naga question.

'We are totally shocked and surprised that even after more than two decades of political negotiation, the MHA and its agencies have become obnoxious.

He dubbed as 'serious provocation' the conduct of the home ministry, and said it went against the spirit of political negotiation and the framework agreement.

Muivah was also bitter about the role of Nagaland Governor R N Ravi who, before taking up the new assignment, was the government of India's chief negotiator for the Naga talks.

He alleged that Ravi was interfering with the law and order issues in 'deliberate deviation' from his appointment as the Centre's representative for the peace talks.

'The activities of the Representative of the Gol is polarising the Naga society instead of uniting the Nagas for an honourable political solution,' Muivah wrote.

He alleged Ravi was meeting only a 'certain section' of the Naga society that is not committed to a 'genuine political solution and who do not represent the genuine aspiration of the Naga people'.

Despite Muivah's fulmination, several rounds of talks to restore peace in Nagaland have been held in New Delhi.

The Indian side was largely represented by officers of the Intelligence Bureau (IB).

We have come to India on the invitation of the Gol and we are in Nagaland to meet our own Naga people vis-a-vis the peace process. If the MHA is trying to stop us from meeting our own people, then their negative intent against the peace process has become very clear, he said.

Muivah also wrote that the Indian government should allow him to leave the country if our stay in India is no more welcome. All necessary arrangements must be made for us to leave India and the political talks be resumed in a third country.

The NSCN-IM leader said the letter was released belatedly as he expected the PMO to respond 'positively'. 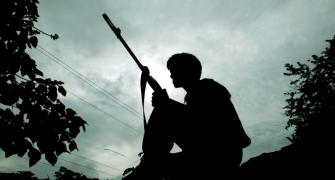