News
Business
Movies
Sports
Cricket
Get Ahead
Money Tips
Shopping
Sign in  |  Create a Rediffmail account
Rediff.com  » News » After its rise and fall, can the NSCN-IM rise again?

The NSCN-IM is no longer the force it used to be.
Once the 'de facto government' of Nagaland, it gradually reduced to an extortion racket.
But missteps by the Centre could give it a new lease of life, reports Aditi Phadnis. 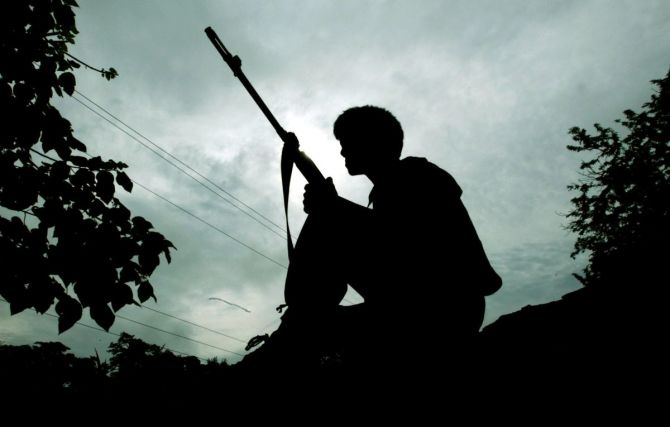 In the beginning, there was the legendary leader of Naga Hill Districts, Zaphu Phizo.

In 1956, he declared his federal independent sovereign government as 'de facto government'. Naturally, a war between Indian forces and Nagaland was inevitable.

When leaders of the Phizo group signed the Shillong Peace Accord with the Indian government in 1975, a clash between factions broke out.

At that time, two younger associates of Phizo -- Isaak Chisi Swu and Thuingaleng Muivah -- were in China, buying arms.

When they returned, they denounced the 'sellout' by the Phizo group.

The Nagaland National Socialist Council (NSCN) was created in Myanmar (then Burma) in 1980 to fight for an independent Nagaland.

The leadership of the NSCN at that time, more or less, reflected the dominant tribe mosaic of Nagaland -- S S Khaplang, belonging to the Burmese Homi tribe, was a colleague of Muivah, who was a Tangkhul from Manipur.

So deep is inter-tribe animus in Nagaland that two people walking on the street won't look each other in the eye if they are from different tribes.

In 1988, Khaplang and Muivah clashed in a gang war. This led to a split: the NSCN (Isaak-Muivah) and NSCN (Khaplang).

The more peaceable Naga tribes -- the Aos, the Angamis and the dominant Konyaks -- had already taken to overground politics.

But their strings were pulled either by one or the other insurgent group.

The Centre, especially covert agencies, saw these groups as instruments to influence events both in India and abroad.

The Intelligence Bureau (IB) developed links with the Muivah group, while the Research and Analysis Wing (RAW), which has assets abroad, worked on the others.

By 1997, all groups had conceded that the bloodletting was leading them nowhere.

The Indian government announced a ceasefire. This introduced a new dynamic.

The Tangkhul Nagas -- represented by Muivah -- tried to come overground. They found politics was dominated by other tribes.

Another round of bloodletting followed, including an attempt on the life of S C Jamir, an Ao and at the time CM of Nagaland, who had an interest in preventing the Tangkhul Nagas from coming overground and was thus supporting the Khaplang group.

The jury is out on the effect the ceasefire has had on the two NSCN groups, and non-NSCN groups.

But in the bigger towns of Nagaland -- Mokokchung, Dimapur and Kohima -- the IM group became very strong.

They also became indisciplined: Extortion was nothing new, but kidnapping and molestation of women, hitherto unknown, became the order of the day.

Complaints began to reach Muivah. Concerned, he visited Nagaland in 2004 and met with a hostile reception.

He called a meeting of village elders (the group had warned that anyone who didn't attend would be fined Rs 35 lakh).

Never afraid to speak up, the elders confronted him with lists of wrongdoing by his boys. At this closed-door meeting, he apologised.

He shuffled commanders around, and significantly, took away fund collection duties from the military wing and transferred this power to the civil wing.

One of the main interlocutors in this period was former Union home secretary Kantipudi Padmanabhaiah.

Speaking to Business Standard, he said he was confident the issue of sovereignty had been settled in the Naga mind but warned about the fine print of the 2015 agreement.

"For the NSCN, it has been a long war. But, times have changed. Younger Naga people are now more integrated with the rest of India."

The NSCN-IM is no longer the force it used to be. But missteps by the Centre could give it a new lease of life.