Protesting farmers at the Singhu in New Delhi have started a facility for ironing washed garments to dry them faster as the natural process now takes longer than usual amid the cold weather in and around Delhi. 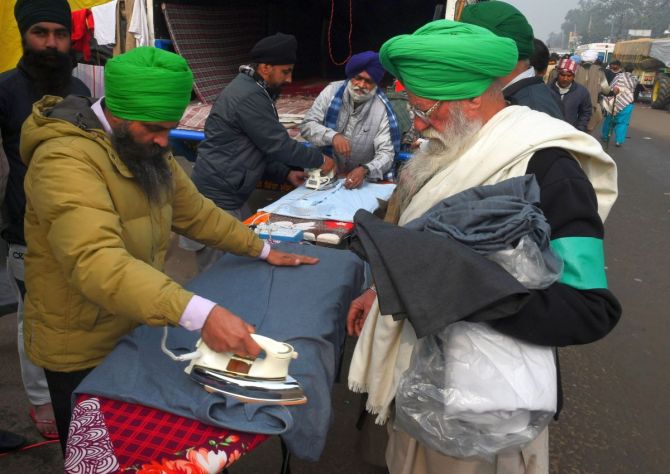 Sarvan Singh, whose livelihood as an auto-rickshaw driver in Amritsar took a hit as he is helping run the service for the protesting farmers, said it was necessary to be part of the movement even though his children want him back home.

"After the rains we realised that while the clothes were getting washed, they were taking really long to dry. So we thought getting a couple of irons would solve the problem," he said.

Singh arrived at the Singhu border protest site a week ago.

"This protest is for everybody, and I wanted to help in whatever way we can, so when we realised that there was a need for ironing facility, we decided to fill the gap," he added.

The service is being run from a stall at the protest site with three-four men working for over 10 hours daily in four-hour shifts.

Currently they have two irons and as many ironing tables, but they are hoping to get more. Power is supplied from an electricity tower located on the highway, right opposite where they have set shop.

"We have paid for these irons and tables from our own pockets, but it would help if we manage to get more supply," Sarvan Singh said.

He is joined in his shift by Sewa Singh from Ludhiana who actually irons clothes for a living back home.

Asked if he was incurring losses in his business back home, the Ludhiana man said there was nothing more important than the protest.

"We are all farmers. Even though we do other jobs to make some income, we work on our fields too, and right now protecting that is our main objective.

"Right now, my brothers are taking care of the shop at home, while I am here," he said.

The farmers have alleged these laws will end the mandi and MSP procurement systems and leave them at the mercy of big corporates, even as the government has rejected these apprehensions as misplaced.

The three farm laws have been projected by the central government as major reforms in the agriculture sector. 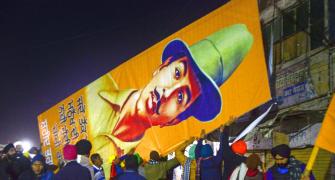 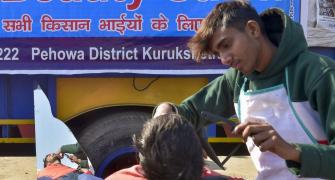