Notice to appear in SC pasted at Musharraf's house

Pakistani authorities on Tuesday pasted a summons at ex-President Pervez Musharraf's farmhouse that directed him to return from self-exile and appear in Supreme Court on March 22 in connection with the assassination of Benazir Bhutto, days after the government sought an Interpol Red Corner notice for his arrest.

The summons, which was issued in the wake of a petition seeking the registration of a second FIR for Bhutto's December 2007 killing, was pasted to the gate of 68-year-old Musharraf's farmhouse at Chak Shahzad on the outskirts of Islamabad.

A three-judge bench headed by Chief Justice Iftikhar Chaudhry on Monday directed authorities to paste the notice at Musharraf's residence after he failed to respond to repeated calls to appear in court.

The notice asks Musharraf to appear in court on March 22 with his national identity card to prove his identity as a Pakistani citizen.

The apex court is currently hearing a petition filed by Bhutto's former protocol officer Aslam Chaudhry, who wants a second FIR to be registered against Musharraf and 12 others in connection with her assassination on December 27, 2007.

Musharraf has been living in self-exile in London and Dubai since early 2009.

He recently put off plans to return to Pakistan after officials warned that he would be arrested upon arrival.

Seven suspects, including two senior police officers, are currently facing trial for Bhutto's assassination. The police officers were arrested on charges of negligence in providing security to Bhutto.

Bhutto was killed by a suicide attacker shortly after addressing an election rally in Rawalpindi. Her party won elections two months later and her husband, Asif Ali Zardari, was then elected the president.

Pakistani investigators have accused Musharraf of failing to provide adequate security to Bhutto despite being aware of threats to her life.

Interior Minister Malik has said the government has approached Interpol to issue a Red Corner Notice for the arrest of Musharraf in connection with Bhutto's assassination. 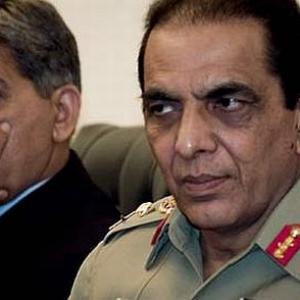