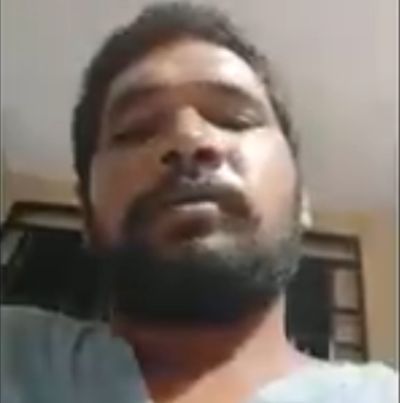 A plumber, said to be dependent on the construction sector for work, allegedly committed suicide by hanging at his house in Guntur district of Andhra Pradesh.

Police said P Venkateswarlu shot a video on his mobile phone saying he was taking the extreme step unable to look after his family due to lack of work.

"For the past few months, there is no work and it is becoming difficult to sustain the family. Hence, I am ending my life," he says in the clipping.

Venkateswarlu, in the video, hoped his elder brother and sister-in-law would look after his son. He wanted his wife to re-marry and live a happy life.

Telugu Desam Party president N Chandrababu Naidu posted the video on his Twitter handle and expressed anguish over such suicides.

'It is heart-wrenching to see workers commit suicide due to lack of work in the last five months and unable to see their families starve.

'The state government should wake up at least now and pay compensation to families that lost work,' the former chief minister said.

They offered Rs 2 lakh as relief from the party.

The victims family alleged that the police remained indifferent when they sought to file a complaint on the suicide.

The TDP leaders claimed a mason too committed suicide in Guntur district a couple of days ago as there was no work.

"Construction activity has come to a standstill due to non-availability of sand. Lakhs of workers in the construction sector are suffering due to lack of work...," they said.

He appealed to all political parties to come together in support of the 3.5 million construction workers.

He also sought the intervention of the Centre to resolve the crisis.