The Supreme Court Friday declined to pass any order on the pleas by two women activists seeking a direction to the Kerala government to ensure safe entry of women in the Sabarimala temple under police protection. 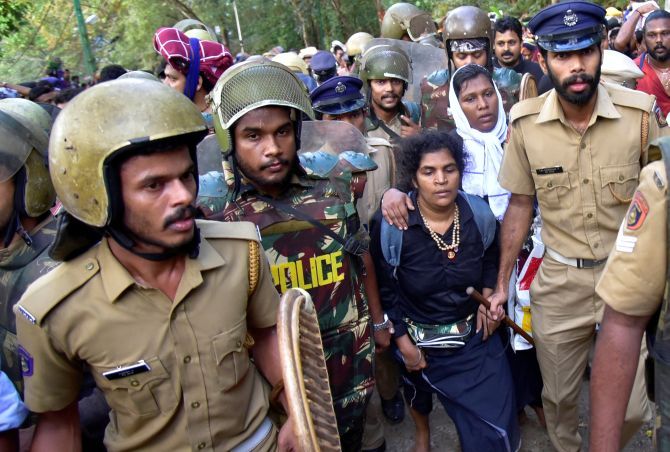 The top court said the issue was "very emotive" and it did not want the situation to become "explosive".

A bench, headed by Chief Justice S A Bobde, said the "balance of convenience" required that no orders are passed in the mater today as the issue had already been referred to a 7-judge bench.

The apex court said it would endeavour to constitute the larger bench at the earliest to hear the matter.

The bench, also comprising Justices B R Gavai and Surya Kant, said though there was no stay on the September 28, 2018 judgment allowing entry of women of all ages into the shrine, "it is equally true that it is not final".

The bench said the pleas seeking review of December last year verdict would be listed at the earliest after the 7-judge bench renders its decision on the reference made to it.

It said it would not pass any orders till the decision is given by the larger bench, and there is no problem if women are happily welcomed in the temple to pray.

When the petitioner's counsel insisted that there was no stay on the last year's verdict, the bench said: "We know that the law is in your favour and if that is not complied and is violated we will send people to jail".

At the outset senior advocate Colin Gonsalves, appearing for one the women activists, told the bench that the Kerala government was not allowing women to enter the shrine and this is akin to stay of the last year's verdict and will send a very wrong signal to the society.

"The balance of convenience requires that we will not pass the orders today. If the matter will be decided in your favour, we will enforce it."

When Gonsalves said that police protection for women entering the shrine could be ordered, the bench said, it doesn't want the situation to become explosive.

"We don't want any kind of violence. When we will hear the matter, we will take a decision. No doubt there is a judgment but it is equally true that it is not final," the bench said.

Senior advocate Indira Jaising, appearing for another petitioner, a Dalit woman, said that they don't want any kind of violence and this country is based on founding faith of non-violence.

The bench said that "going by the newspaper reports people are very emotive there on the issue".

When Jaising insisted that there was no stay on the last year's judgement, the bench said, "We are saying that you are right. We are exercising our discretion on not passing any orders today... We are saying this after knowing the impact".

When Jaising said that the larger bench should hear the matter at the earliest as the shrine is open during the season only, the CJI said, "I will endeavour to constitute the lager bench at the earliest".

Jaising later told the bench that in January this year, the apex court had passed an order directing the Kerala police to provide round-the-clock security to one of the two petitioners.

The bench said the January this year order would continue.

Gonsalves then told the court that the petitioner whom he is representing should also be provided security.

"Are you in danger?" the bench asked.

When Gonsalves replied in the affirmative, the bench said, "If the petitioner applies for police protection, the threat perception be evaluated and she be given protection if required".

On November 14, a five-judge Constitution bench headed by then CJI Ranjan Gogoi, in a 3:2 majority verdict, had referred the pleas seeking a review of its historic 2018 judgment to a seven-judge bench, along with other contentious issues of alleged discrimination against Muslim and Parsi women.

In September 2018, a five-judge Constitution bench had, by a majority 4:1 verdict, allowed girls and women of all ages to visit the Ayyappa temple at Sabarimala, saying discrimination on physiological grounds was violative of the fundamental rights as enshrined in the Constitution such as the right to equality. 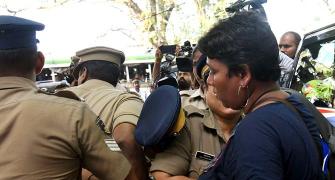