'I want the Supreme Court to give directions to the Kerala government that it must give protection to all those women who want to enter Sabarimala.' 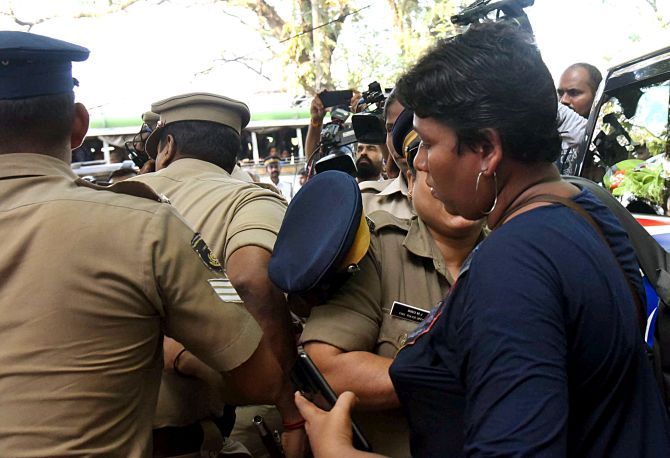 IMAGE: Women's rights activist Bindu Ammini being escorted by the police after a protest by various Hindu organisations outside the police commissioner's office in Kochi on November 26, 2019. Photograph: ANI Photo

Bindu Ammini was one of the two women who entered the Lord Ayyappa temple in Sabarimala in January after the Supreme Court vedict permitted the entry of women of all ages into the shrine. Previously, women between the ages of 10 and 50 were not allowed to enter the temple.

Last week, she tried to repeat the feat after the 2018 verdict was referred to a larger bench for review by the Supreme Court.

However, this time she was stopped by protesters, one of whom sprayed some chemical onto her face.

Bindu was not accompanied by the police this time as the Kerala government categorically stated that it would not provide security to women attempting to enter the shrine. This, despite there being no stay on the Supreme Court's 2018 order facilitating the entry of women of all ages.

Bindu has now filed a petition in the Supreme Court to direct the Kerala government to provide security to women who want to visit the shrine.

"The Supreme Court hasn't altered its decision of September 2018 facilitating the entry of women of all ages into the temple, why then is the Kerala police not giving us protection?" Bindu asks Rediff.com's Syed Firdaus Ashraf.

Why have you approached the Supreme Court?

I went to the Supreme Court seeking a direction to the Kerala government to provide protection to women who want to enter the Sabarimala temple.

The Kerala government did a U-turn on giving protection to such women (this year).

The Supreme Court hasn't altered its decision of September 2018 facilitating the entry of women of all ages into the temple, why is the police then not giving us protection?

Another direction that I have requested the Supreme Court to give is to the state government to propagate its 2018 decision through the media that women of all ages are allowed in Sabarimala.

You tried to re-enter Sabarimala on November 26, but couldn't.

I and Trupti Desai of the Bhumata Brigade went to the police commissioner's office (in Kochi) to seek protection.

After the meeting, when I was alone, I was attacked by a Hindu right wing leader. He sprayed some liquid onto my face and ran away.

He was surrounded by other right wing leaders. It was a planned attack and they sprayed chemical into my eyes and ears and on my neck.

Till today I am suffering the effects of that chemical attack.

Were the attackers arrested?

Only one person was arrested. I belong to the scheduled caste. Yet the police did not invoke the SC/ST (Prevention of) Atrocities Act against the accused.

He was only arrested under IPC (the Indian Penal Code's) Section 324 (voluntarily causing hurt by dangerous weapons). This is a bailable offence.

When the Supreme Court has sent its judgment to a larger bench for review, why did you try to enter the temple again?

The judgment was clear that there is no stay on women entering the Sabarimala temple.

Nowhere have the judges said that there is a stay on women's entry.

You have gone to the temple once. Why do you want to re-enter the place?

People visit Sabarimala every year. It is an annual ritual. It is not just a one-time visit.

Therefore, I decided to go again.

People who oppose your entry say women like you are trying to destabilise the Hindu religion.

I appreciate the Supreme Court judgment which says women of all ages are allowed to enter Sabarimala and I believe only in our Constitution.

I have no connection with the Communist Party of India or even the Congress.

What do your lawyers say? Will you get an early hearing considering this case has gone to a larger bench?

I am hoping for that. I just want the Supreme Court to give directions to the Kerala government that they must give protection to all those women who want to enter Sabarimala.

Why has the Kerala government changed its position on providing security to women?

I am not in a position to answer for them. They changed their position after the Supreme Court sent this matter to a larger bench. I have no idea why they took this step.