The Centre has asked all states to avoid large congregation, ensure social distancing and webcast the Independence Day events as the novel coronavirus cases continue to spiral unabated. In an advisory, the home ministry said COVID-19 warriors like doctors, health and sanitation workers should be invited in the ceremony as a recognition of their noble service in the fight against the pandemic.

It said some people who recovered from the infection might also be invited.

"Therefore, all programmes should be organised in a way that large congregation of people is avoided and technology is used in a best possible manner for celebration befitting the occasion," the advisory said.

The events organised could be webcast in order to reach out people at large, who are not able to participate, it said.

The ministry said it would be appropriate that the theme of 'Aatma Nirbhar Bharat', announced by Prime Minister Narendra Modi for a self-reliant India, was suitably spread and publicised through various activities and messages in the functions and on social media during the Independence Day celebrations.

There are 4,40,135 active cases of the coronavirus disease presently in the country.

In its advisory, the home ministry said it was imperative to follow certain preventive measures while organising various programmes or activities for the Independence Day celebrations amid the pandemic.

The measures include maintaining social distancing, wearing of masks, proper sanitisation, avoiding large congregations, protecting vulnerable persons and follow all COVID-19 guidelines issued by the ministries of health and home, it said.

The 'At Home' reception will be conducted at the Rashtrapati Bhavan.

The home ministry said certain guidelines had been prescribed for celebrations of the Independence Day at different levels in the states and Union territories.

"It would also be appropriate that COVID-19 warriors like doctors, health workers, sanitation workers are invited in the ceremony as a recognition of their noble service in fight against Covid-19 Pandemic," the advisory said. "Some persons cured from COVID-19 infection may also be invited."

A similar ceremony as mentioned for the state level should also be held at the district, sub-division or block level and panchayat headquarters or large villages.

The national flag at the district level level can be hoisted by a state minister or district magistrate, at the sub-division level by a sub divisional magistrate and at the panchayat level by the head of the panchayat or village head.

However preventive measures like maintaining social distancing, wearing of masks, proper sanitisation, avoiding large congregations, protecting vulnerable groups and other measures as prescribed and recommended by the health ministry should be followed.

Performance of police and military bands may be recorded at places of historic importance associated with Independence movement; and recorded versions thereof may be displayed through large screens and digital media, during public functions and on social media, the advisory said. 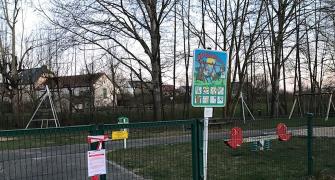