No decision on supporting Sena yet: NCP, Congress

Allies Congress and Nationalist Congress Party on Tuesday appeared to be treading cautiously over forging ties with the Shiv Sena, saying they were yet to take a call on backing it to form government in Maharashtra but will hold further discussions. "Clarification on all issues" was necessary before the decision was taken, the two parties said.

At a joint press conference with Congress leaders, NCP president Sharad Pawar said the two parties will discuss and evolve a consensus on what should be the policies and programs if the Shiv Sena was to be supported.

The press conference was attended by senior Congress leaders Ahmed Patel, Mallikarjun Kharge and K C Venugopal -- deputed by the party president Sonia Gandhi to hold further talks with the NCP on the issue.

Patel also condemned Maharashtra governor and Centre's decision to recommend President's rule in the state, and accused them of mocking democracy and Constitution.

He questioned the governor for not inviting the Congress to stake claim to form government after the BJP, the Shiv Sena and the NCP were called.

"There is a need for detailed discussion on these aspects. The future policy will be decided after the two parties reach consensus on it," it added.

Pawar said Congress and NCP leaders discussed the nitty gritty of a possible common minimum programme during the meeting.

"We have not yet started discussion about common minimum programme," Pawar said, adding that power distribution among the three parties was not being discussed at the moment.

The Congress and the NCP will first hold parleys on whether they want to form government, what will be the common grounds in case they want to, and what should be the policy of such a government, he said.

"Only after (working out) that, the issue of sharing power may come up for discussion," he said. 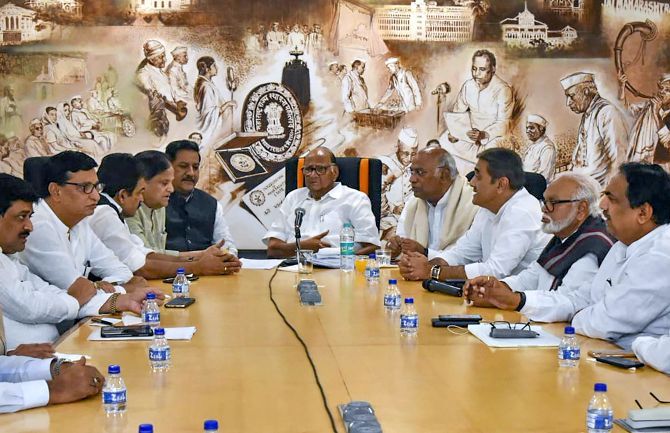 Asked whether Congress and NCP leaders will hold meetings with Thackeray, Pawar sarcastically said the two allies were "not in a hurry", as the governor has given them "lot of time", referring to the imposition of President's rule.

When asked why could not the Congress take any decision on Monday on Sena's overtures, Ahmed Patel said, "They (the Shiv Sena) contested the election as an ally of the BJP. We contested the election together. So how can we reach that decision until we have between us clarity on certain issues, common minimum programme and other issues?"

The Congress could not take any decision without consulting its ally, and the discussion on common minimum programme was very important, Patel added.

Patel also said that the NCP demanded that governor give it more time to stake claim to form government, but the demand was not accepted.

Governor Bhagat Singh Koshyari had invited the NCP, third largest party in the state, to express willingness and ability to form government on Monday evening and given it time till 8.30 pm on Tuesday.

Patel said the two parties will hold discussions with the Shiv Sena only after they reach consensus on "certain points".

Asked when the three parties could stake claim to form government, Patel said, "We will hold discussion with our ally and then will clarify issues with the Shiv Sena and after that...We will try to make it happen as soon as possible."

The Shiv Sena on Monday suffered a setback in its efforts to cobble up a non-BJP government in Maharashtra with the Congress at the last moment announcing its decision to hold more talks with ally NCP on supporting the Uddhav Thackeray-led party.

On Tuesday, Koshyari sent a report to the Centre, recommending President's rule in the state which is facing a political impasse since the assembly poll results of October 24, following which President's rule was imposed in Maharashtra. Time for BJP to move on to bread and butter issues