News
Business
Movies
Sports
Cricket
Get Ahead
Money Tips
Shopping
Sign in  |  Create a Rediffmail account
Rediff.com  » News » Time for BJP to move on to bread and butter issues

Time for BJP to move on to bread and butter issues

With Ayodhya dispute solved, now is the time for the party and the leadership to look elsewhere for consolidating the nation and with that their party’s hold, says N Sathiya Moorthy. 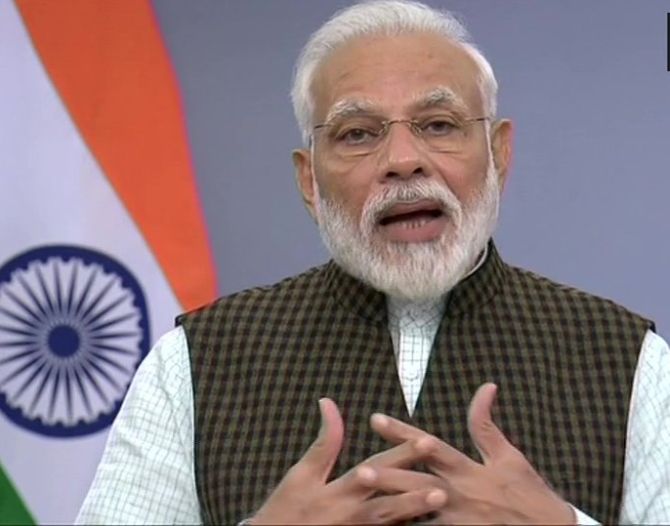 IMAGE: Prime Minister Narendra Modi addresses the nation on November 9, 2019, after the Supreme Court verdict on the Ayodhya dispute.

Now that the effect of the unanimous, five-judge Supreme Court bench’s verdict in the ‘Ayodhya case’ has gone deep and fast, with all-round acceptance of the judicial and judicious approach to the vexatious issue that threatened the very national fabric, there is an even more urgent need to live by it in the months and years to come.

Credit should go to the Centre, the state governments and the ruling Bharatiya Janata Party leadership of Prime Minister Narendra Modi, Home Minister Amit Shah and their ideological Rashtriya Swayamsevak Sangh parent to spread the message of peace and tranquillity ahead of the verdict. The government at their command and those under the Opposition in different states adopted a coordinated approach to ensure that social media was not abused or misused to spread the message of hate, hurt and possible violence.

But now comes the second such step of their collective efforts, where the political Opposition across the country, barring a few peripheral groups, put national interest and identity before their political interests. Possibly, if such were the case, the Babri masjid demolition, post-demolition violence and the Mumbai serial blasts of March 1993 might not have even occurred.

There is a lesson in both, for the nation and for every citizen, politician or not.

Though only academic, the question arises, what if the verdict was anything but what it was? Going by the prevailing mood in the days leading up to the verdict, it can be safely assumed that there would not have been much change or difference.

This leads to the inevitable and unforgettable question about the possible mood in the coming weeks and months, if and when one or the other of the parties to the legal suit moves a ‘review petition’, though some of them have already declared their intention not to do so. A lot will depend on their legal teams’ closer reading of the verdict and its legal and constitutional interpretation(s).

Thus arises a theoretical situation in which a future SC bench reviewing the current verdict, but possibly with different judges than at present. Under law and practice, review petitions are heard and disposed of only by the same bench that had pronounced the original verdict.

In this case, Chief Justice of India Ranjan Gogoi will be retiring this month. If the court still clears a ‘review’ petition for hearing, and if between then and when the petition(s) gets to be heard, more judges from the current bench reach the age of superannuation, there could be a ‘real review’ of the current verdict.

The nation’s polity and governments should then ensure that the same sombre mood remains, whatever the ‘review verdict’. In between, the governments at the Centre and in Uttar Pradesh may also be called upon/directed to maintain status quo at the disputed site. It is here that BJP-ruled Uttar Pradesh government of chief minister Kalyan Singh failed on December 6, 1992.

In its verdict, the SC has held the demolition ‘illegal’, implying that the pending criminal cases on this front need to be fast-tracked. Weeks before the last presidential elections, there was a revival of the CBI case, when media speculation had it that the BJP’s ‘Ayodhya mascot’ L K Advani might be the party candidate.

The issues are very difficult for the nation to handle. One, justice should be seen as being done on the demolition front, as much now on the property dispute, which also revolves around personal beliefs of individual communities that constitute the nation and spin the nation’s fabric.

At the same time, going beyond the politics of the time, there is a need to ensure that the revived criminal case is not allowed to be hijacked by interested parties, to revive pre-verdict sentiments of mutual hurt, all over again. The nation just cannot afford it.

For the governments, political parties and social organisations, including the RSS but not stopping with it, to handle the situation judiciously and unemotionally, with no spell of politicking and electioneering, it is not going to be any easier.

The ruling party and its Parivar, especially, need also to ensure that the Ayodhya verdict does not encourage stray elements from within do not start similar campaigns, legal, political or any other, to seek claims to such other ‘disputed sites’ in other holy places such as Varanasi and Mathura.

Media reports and analyses around the time of Advani’s ‘rath yatra’ in 1990 and the demolition two years later had indicated similar claims pending for disposal. Some even argued that their claims to the other two holy places were better documented and more recent, and hence could be executed easier.

At the time, it was said to be felt that the Ayodhya was the toughest of such cases, and once judicial authority was obtained on the dispute then it would only be a matter of time before they could cite the same in the other cases and obtain them through purely legal processes.

Leave aside the possibility of multiplicity of litigation, which could be vexatious even more, there is the real danger of the current post-Ayodhya national mood and psyche fraying at the ends, sooner than later. It is thus the responsibility of the government at the Centre and the ruling party, and also their electoral counterparts, to ensure that the current passive mood prevails, reigns and rules, and is not undisturbed.

From a purely political viewpoint, the ruling BJP at the Centre was always campaigning on three major issues, namely, Article 370 on J&K, uniform civil code and the ‘Ayodhya dispute’. Now, over the past five-plus years of the Modi rule, they have achieved two. Now is the time for the party and the leadership to look elsewhere for consolidating the nation and with that their party’s hold, too. The reverse is also true.

At the height of the ‘political instability’ at the Centre, when the BJP-NDA was formed and Atal Bihari Vajpayee became the party’s first prime minister, the BJP national convention came up with a ‘Chennai Declaration’ in 1998, deciding to ‘cold-store’ all controversial issues of the kind already named.

Now may be the time for the party and its sister and feeder organisations to declare that such of their goals had been achieved, and there won’t be any more talk of ‘lynchings’, ‘ghar-wapsi’ and the like. Like the post-Independence Congress, which found a new national agenda in ‘democratic socialism’, this may be the time for BJP to look for new and workable ideas that impact on the individual’s lives and livelihood, not just sentiments and emotions,