No chief minister or political leaders from other states will be part of Aam Aadmi Party convener Arvind Kejriwal's oath ceremony at Ramlila Maidan in New Delhi on February 16, said a senior party leader on Thursday. IMAGE: A fan of Delhi Chief Minister Arvind Kejriwal gives a final touch to his portrait using charcoal after the AAP victory in the Delhi Assembly election. Photograph: ANI Photo

"No chief minister or political leader from other states will be invited for the ceremony that is going to be specific to Delhi," he said.

Kejriwal will take oath with the people of Delhi who have reposed their faith in his leadership, Rai added.

An AAP functionary said that by inviting several chief ministers and non-BJP leaders from other states, the party does not want to send out a message that it is "confrontationist" against the central government, sources said. Baby Mufflerman' Aavyan Tomar, who stole the hearts when he dressed up as Arvind Kejriwal, will be a special invitee at the swearing-in ceremony at the Ramlila Ground.

An AAP functionary said Tomar has been invited for the oath-taking ceremony. Tomar, who is little more than a year old, hogged the headlines after he was spotted at the party office dressed like Kejriwal -- with spectacles, party cap, a sweater and muffler.

His father Rahul Tomar is an AAP supporter.

"In 2013 and 2015 as well, no political leaders and chief ministers from other states had been invited for Kejriwal's oath ceremony. Party wants to keep the upcoming February 16 event Delhi-specific," he said.

The Aam Aadmi Party returned to power winning 62 of the 70 assembly seats in the Delhi election held on February 8.

While the Bharatiya Janata Party has won eight seats, the Congress drew a blank.

All the seven BJP MPs of Delhi and newly-elected party MLAs are likely to be invited for the oath-taking ceremony due to protocol issues, another AAP leader said, adding that the ceremony would be a government event that will be open to public.

The AAP has planned mobilisation of people for the mega event and all the newly-elected MLAs of the party have been asked to ensure huge participation from their constituencies.

On Wednesday, senior AAP leader Manish Sisodia requested Delhiites to attend the oath-taking ceremony, which will start at 10 am, at Ramlila Maidan in large numbers.

Kejriwal's new cabinet is unlikely to have fresh faces as he is expected to retain all the six incumbent ministers.

The sources said portfolios of all the seven ministers are likely to remain the same as they were holding in the outgoing cabinet. 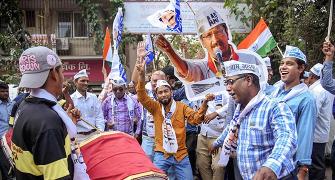