News
Business
Movies
Sports
Cricket
Get Ahead
Money Tips
Shopping
Sign in  |  Create a Rediffmail account
Rediff.com  » News » No better time to be young than now: PM at Bhutan varsity

No better time to be young than now: PM at Bhutan varsity

Prime Minister Narendra Modi on Sunday gave a pep talk to the students in Bhutan, saying they had the power and potential to do extraordinary things, which will impact future generations. 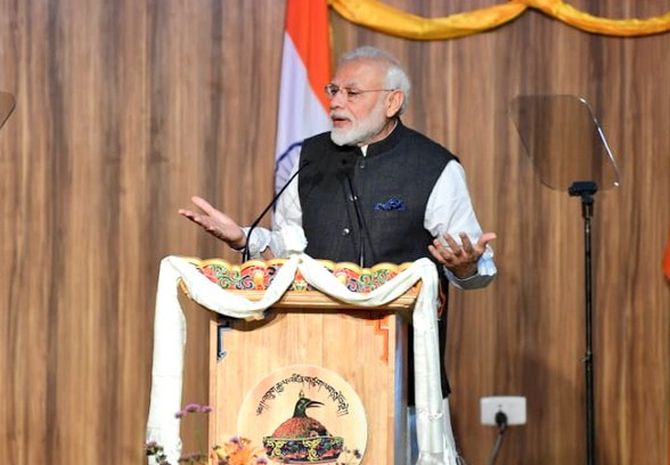 Addressing the students of the prestigious Royal University of Bhutan in Thimphu, Modi encouraged the 'brightest' Bhutanese youth to work hard and take the Himalayan nation to great heights.

Noting that there are several challenges ahead, the prime minister said, ‘for every challenge, we have young minds to find innovative solutions to overcome them. Let no limitation constrain you’.

"I want to tell you all -- there is no better time to be young than now. The world today offers more opportunities than ever before. You have the power and potential to do extra-ordinary things, which will impact generations to come. Find your real calling and pursue it with full passion," Modi told the students in the presence of Bhutan Prime Minister Lotay Tshering.

"As Bhutan soars high in its endeavours, your 1.3 billion Indian friends will not just look on and cheer you with pride and happiness. They will partner you, share with you and learn from you," Modi said. 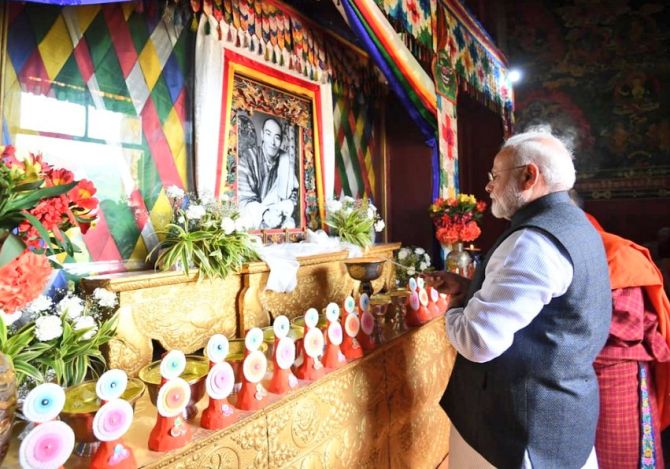 IMAGE: Modi pays his respects at the National Memorial Chorten in Thimphu, a monument honoring the late Third Druk Gyalpo.

Pointing out that India is witnessing historic transformations in a wide range of sectors, Prime Minister Modi said India is keen to cooperate extensively in new frontiers, from schools to space, digital payments to disaster management.

"Our cooperation in all these sectors will have a direct impact on young friends like you," he said, citing cooperation between India's National Knowledge Network and Bhutan's DrukREN as an example.

"It will provide secure and fast connectivity between our universities, research institutions, libraries, health-care and agricultural institutions. I urge you all to make full use of this facility," he said.

"We inaugurated the Thimphu Ground Station of the South Asia Satellite and expanded our space cooperation. Through satellites, benefits of tele-medicine, distance education, resource mapping, weather forecast and even warning of natural disasters will reach even remote areas," he said. 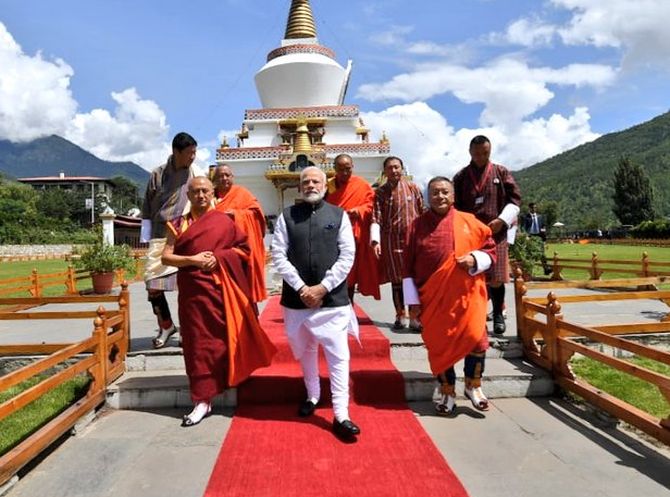 IMAGE: Modi is in Thimphu on his second visit to Bhutan and the first since his re-election in May this year.

Referring to India's space programmes and the Chandrayaan-2 mission, Prime Minister Modi said Bhutan is also on its way to having its own satellite.

"It is even a matter of great happiness that young Bhutanese scientists will travel to India to work on designing and launching Bhutan's own small satellite. I hope that someday soon, many of you will be scientists, engineers and innovators," he told the students.

Hailing the decades-old friendship of Bhutan and India, Modi said it is natural that the people of the two countries experience great attachment to each other.

"After all, we are close not just due to our geography. Our history, culture and spiritual traditions have created unique and deep bonds between our peoples and nations," he said.

Recalling a Facebook post of Bhutanese Prime Minister Tshering in which he mentioned about Exam Warriors -- a book written by Modi to advise youngsters about how to face exams without stress, the prime minister said that post touched his heart.

"Can I tell you something? Much of what I wrote in Exam Warriors is influenced by the teachings of Lord Buddha. Particularly, the importance of positivity, over-coming fear and living in oneness, be it with the present moment or with Mother Nature. You are born in this great land," Modi said. 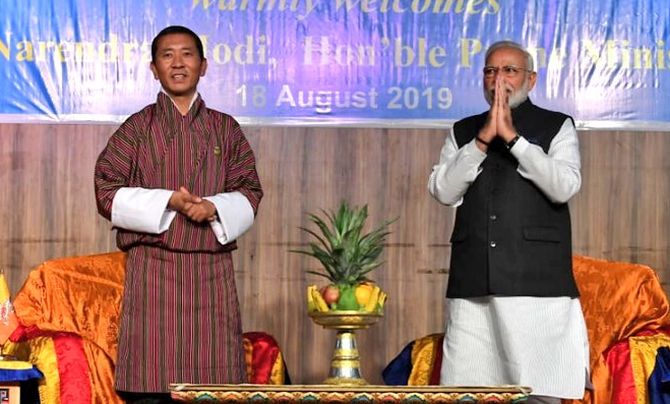 Modi said that for centuries, education and learning have been central to the ties between India and Bhutan.

"In ancient times, Buddhist teachers and scholars formed the bridge of learning between our peoples. This is a price-less heritage, which we wish to preserve and promote. Therefore, we welcome more students of Buddhism from Bhutan in institutions such as Nalanda University," he said.

He said that in the 20th century, many Indians came to Bhutan as teachers. "Most Bhutanese citizens of older generations would have had at least one India teacher during their education," he said.

"Over four thousand students from Bhutan are engaged in studies in India. This number can and should grow. As we march forward to develop our countries, we also need to keep pace with ever-changing technological. It is, therefore, important that we collaborate in all areas of emerging technologies and education," he said.

"I am happy that yesterday we have begun new chapters of engagement between India's premier IITs and this prestigious University. We hope that these will lead to more collaborative learning and research," he added.

Stating that Bhutan has understood the essence of happiness, Modi said it is not a surprise that the Himalayan nation has become synonymous in the world for its concept of Gross National Happiness.

"In any part of the world, if we ask the question what do you associate with Bhutan, the answer will be the concept of Gross National Happiness. I am not surprised. Bhutan has understood the essence of happiness," he said.

"Bhutan has understood the spirit of harmony, togetherness and compassion. This very spirit radiates from the adorable children who lined the streets to welcome me yesterday. I will always remember their smiles," Modi said.

Modi arrived in Bhutan on Saturday on a two-day visit.

This is his second visit to the country and the first since his re-election in May this year. 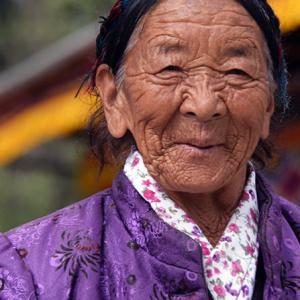