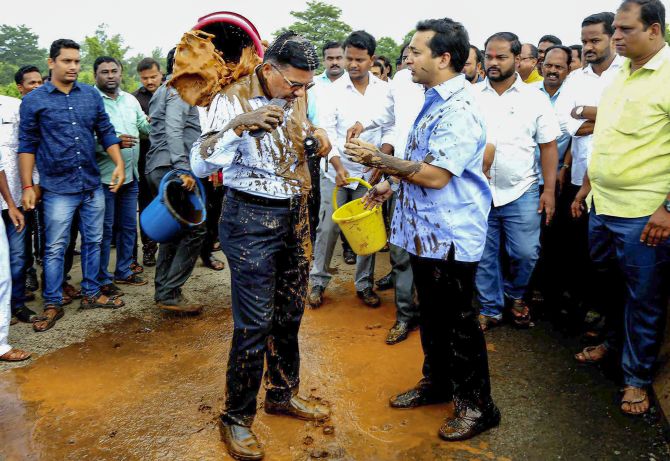 IMAGE: Congress MLA Nitesh Narayan Rane and his supporters throw mud on engineer Prakash Shedekar at a bridge near Mumbai-Goa while they were inspecting the pothole-ridden highway, in Kankavali, on Thursday. Photograph: PTI Photo

A court in Maharashtra on Friday remanded Congress MLA Nitesh Rane and 17 of his supporters, arrested for attacking a deputy engineer with mud, in police custody till July 9.

Rane and the other arrested accused were produced before a court at Kankavli in coastal Sindhudurg district this afternoon and were remanded in police custody till July 9.

The assault on the engineer came days after a Bharatiya Janata Party legislator assaulted an official with a cricket bat in Madhya Pradesh.

Nitesh Rane, the son of BJP Rajya Sabha MP and former chief minister Narayan Rane, and his supporters were arrested on Thursday for the mud attack on deputy engineer Prakash Shedekar of the National Highways Authority of India (NHAI) at Kankavli.

Narayan Rane later apologised for his son's conduct. Nitesh Rane, the MLA from Kankavli, and his supporters were protesting after finding potholes and mud on the busy Mumbai-Goa highway that passes through the coastal district.

In the video clip that went viral on social media, Nitesh Rane and his supporters, including Kankavli Municipal Council president Samir Nalawade, were seen tying Shedekar to the railing of a bridge and pouring buckets of mud on him.

"Every day the locals have to face such mud from the passing vehicles...you also experience it," Nitesh Rane and Nalawade were heard saying to Shedekar.

A section of the Prevention of Damage to Public Property Act was also slapped on them, he said.

As the video of the incident went viral and caused an outrage, Narayan Rane apologised for his son's misconduct.

"I apologise for my son's act of pouring mud on a government official. The protest (against poor condition of the highway) was for the local people," he had saidon Thursday.

Akash Vijayvargiya, who was later arrested and spent four days in jail before getting bail, attacked the official with a cricket bat over demolition of a dilapidated building. 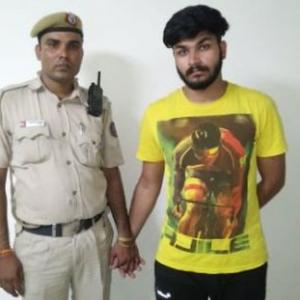