A Delhi court on Monday ordered that the four convicts in the Nirbhaya gang-rape and murder case be hanged on March 3 after it issued fresh death warrants, observing that deferring the execution any further would be "sacrilegious" to the rights of the victim for expeditious justice.

It is for the third time that the death warrants were issued by the court against them.

"It is hereby directed that the death warrants, as issued by this court vide order dated January 7, 2020 in respect of the condemned convicts namely Mukesh, Pawan, Akshay and Vinay shall now be carried into effect by causing the said convicts to be hanged by neck until they are dead on March 3 at 6 am," Additional Session Judge Dharmender Rana said.

The court noted that death warrants were earlier issued on January 7 and the execution was later deferred twice, i.e., on January 17 and January 31.

"Now deferring it any further would be sacrilegious to the rights of the victim for expeditious justice," it said.

Nirbhaya's mother expressed the hope that the four convicts would finally be hanged on March 3.

"We hope the order (death warrant) is finally executed," she told reporters.

Nirbhaya's father said the family has been receiving congratulatory messages stating their seven-year-old struggle for justice will finally come to an end.

He, however, was a bit cautious.

"We are happy with the issuance of death warrant. But our struggle will continue till they are hanged," the father said.

In its order, the court further noted that the criminal appeal of the convicts was dismissed by the Supreme Court on May 5, 2017 and after a lapse of about 33 months, convict Pawan has opted neither to file any curative petition nor any mercy petition has been filed on his behalf.

Pawan is the only one among the four convicts who has not yet filed the curative petition -- the last legal remedy available to a person, which is decided in-chamber.

He has not filed the mercy plea either.

"There is only two possible inferences for such indolence; 1) either convict Pawan is satisfied with the verdict of the Supreme Court or 2) he is simply interested in merely delaying the court proceedings, In either case, he cannot claim that the execution of the sentence needs to be delayed further," the court noted.

It further noted that the Delhi high court had given "one more opportunity" to Pawan, "unambiguously clarifying to exercise his rights within a week, failing which requisite action shall be initiated without any further delay".

"Convict Pawan cannot be permitted to defeat the ends of justice by simply opting to remain indolent," it said.

The first date of execution, January 22, was postponed to February 1 by a January 17 court order.

Then the trial court, on January 31, stayed, "till further orders" the execution of the four convicts as they had not exhausted all their legal remedies.

The court said "there cannot be any quarrel with the proposition that protection under Article 21 (no person shall be deprived of his life or personal liberty except according to a procedure established by law) of Constitution is available to the convicts till their last breath."

The court refused to entertain the plea, saying "mere preparation of a fresh mercy petition or in the words of court 'a complete mercy petition' cannot be a ground to defer the execution of the death warrants."

The court was also informed that Vinay was on hunger strike in Tihar jail.

However, he later broke the strike, the court was told.

It directed the jail superintendent to take appropriate care of Vinay as per law.

Vinay's lawyer told the court that the convict was assaulted in jail and has head injuries, adding he was suffering from acute mental illness and hence the death sentence cannot be carried out.

The court rejected the ground of "mental illness", saying that the issues was raised before the apex court and it rejected the plea on the basis of the report submitted by the doctors, who said the convict was "psychologically well adjusted" and the "general condition of the petitioner is stable".

Mukesh told the court that he does not want to be represented by advocate Vrinda Grover, after which it appointed advocate Qazi to represent him.

Last Thursday, the court appointed Qazi to represent Pawan after being informed by Tihar jail authorities that the convict refused to choose a lawyer offered by Delhi Legal Services Authorities.

The court was hearing the applications by Nirbhaya's parents and the Delhi government, seeking fresh death warrants for the convicts after the Supreme Court granted liberty to the authorities to approach the trial court for issuance of fresh date for the execution of these convicts.

The 23-year-old physiotherapy intern, who came to be known as 'Nirbhaya' (fearless), was gang-raped and savagely assaulted on the night of December 16, 2012, in a moving bus in South Delhi.

She died of her injuries a fortnight later in a Singapore hospital. 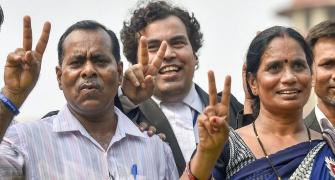