News
Business
Movies
Sports
Cricket
Get Ahead
Money Tips
Shopping
Sign in  |  Create a Rediffmail account
Rediff.com  » News » NDA to form govt in Bihar next week with Nitish as CM

With the National Democratic Alliance getting a comfortable majority in the Bihar assembly, all eyes are now on the formation of the next government which will likely be sworn in soon after the Diwali festivities get over later this week, informed sources said in Patna on Wednesday. 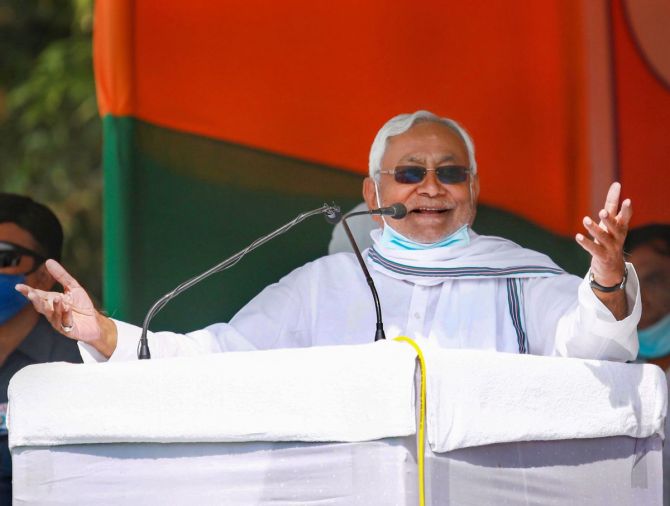 They said Janata Dal-United president Nitish Kumar will be back as the chief minister for yet another term in office.

Kumar, who looks on course to becoming the longest serving chief minister of the state during his new term, was expected to take oath on or after Monday next week before which he will send his resignation to the governor since his current tenure expires at the end of November.

The record is currently held by the state's first chief minister Srikrishna Sinha who was in office for 17 years and 52 days.

Kumar has so far helmed the state for 14 years and 82 days.

Upon being administered the oath of office, Kumar will also hold the distinction of having been sworn in seven times as chief minister in two decades.

He first took oath as chief minister in 2000 when the state threw up a hung assembly but resigned a few days later for want of adequate number of MLAs backing him.

In 2005, he became the chief minister after the NDA secured a full majority, and returned to power five years later.

In 2014, he stepped down owning moral responsibility for the JD-U's debacle in the Lok Sabha elections but returned as the CM less than a year later.

In November 2015, the Grand Alliance comprising the JD-U, Rashtriya Janata Dal and the Congress, which declared him as its chief ministerial candidate, won the assembly elections and Kumar was again sworn in.

In July, 2017 he stepped down heeding his 'inner voice' which had been tormenting him over his then deputy Tejashwi Yadav's name cropping up in a money laundering case.

Kumar was, however, sworn in again the very next day when he formed a new government with the Bharatiya Janata Party.

The JD-U chief is expected to get full backing of all constituents of the NDA, including the BJP, which has outperformed his party in the assembly elections.

Speculations about the BJP reneging on its promise of backing Kumar as the chief minister following its own impressive performance were put paid to at a late night press conference on Tuesday.

At the press conference, convened around midnight when trends made it clear that the NDA will get a comfortable majority, the party's national general secretary in-charge of the state Bhupendra Yadav, Bihar unit chief Sanjay Jaiswal, Union minister Nityanand Rai and Deputy CM Sushil Kumar Modi had reiterated that Kumar will be the chief minister again.

They evidently had the backing of the party's top leadership, of which Kumar himself dropped ample hints.

'The people are our lord. I salute them for the support which enabled the NDA to get a majority. I am also thankful to Prime Minister Narendra Modi for the cooperation I have been receiving,' Kumar tweeted in Hindi, on Wednesday evening. 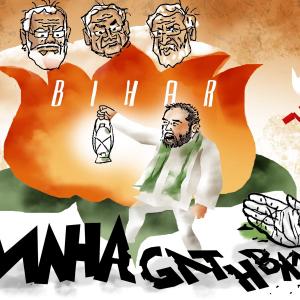