IMAGE: Lashkar-e-Tayiba terrorist Naveed Jatt, centre, who was gunned down in an encounter on Wednesday. Photograph: Umar Ganie for Rediff.com

Pakistan-born Lashkar-e-Tayiba commander Naveed Jhatt, who was wanted in connection with the assassination of journalist Shujaat Bukhari and escaped from custody in February, was gunned down in Jammu and Kashmir's Budgam district on Wednesday, police said.

In a major success for the security forces, "most wanted" Jhatt, who was an associate of 26/11 terrorist Ajmal Kasab, was killed along with an accomplice in an encounter in a village in central Kashmir's Budgam area, officials said.

Three army personnel were injured in the encounter that claimed the life of the terrorist who had slipped away from the police dragnet at least six times and was involved in multiple attacks in the Valley over the years.

The LeT terrorist was a Pakistani national and due process would be followed, Director General of Police Dilbagh Singh said.

"We'll be writing to the ministry of home affairs to inform Pakistan to take the body," Singh said.

The endgame for Jhatt, alias Hanzalla, started in the early hours of Wednesday when a special operations group of the Jammu and Kashmir police cordoned off a house at Kuthpora Chattergam area of Budgam following an intelligence input about the presence of militants, officials said.

A gun battle broke out when those holed up inside the house fired at security forces, they said, detailing the events leading to Jhatt's killing. The forces retaliated and the firing intensified as the terrorists moved from one house to another.

The operation was interrupted when locals cried for help from one of the houses and had to be evacuated.

During this process, the terrorists fired at the police and army teams, leading to minor injuries to the armymen who were shifted to hospital, officials said.

At daybreak, two terrorists were killed. They were identified when security forces started clearing and sanitising the area. One of them turned out to be Jhatt, who was known as a commander of the proscribed terror outfit LeT and staged a dramatic escape from a government hospital here in February this year.

"It was swift operation carried out by security forces. We finally got the prize catch Naveed Jhatt, who was a Pakistani national," Singh said.

"He has managed to give us the slip in six different encounters but today our boys managed to pin him down," the DGP added.

Jhatt was wanted for his complicity in a series of terror crimes, including the killing of noted journalist Shujaat Bukhari in June, attacks on security establishments and many other civilian atrocities, police said.

According to disclosures he made earlier, Jhatt, alias Jhutt alias Abu Hanzalla, was born in Multan in Pakistan and was part of Kasab's group at a madrassa in the neighbouring country where he had undergone arms training.

Jhatt and his associates crossed over into Kashmir Valley in October 2012, state police records.

He notched a long history of terror crime after that.

The 22-year-old school dropout from Pakistan was involved in multiple terror strike, including an attack on the Army in Hyderpora in Srinagar, an attack on the Silver Star hotel along the national highway outside the city and three attacks on police and CRPF camps in south Kashmir.

He was involved in the killing of an ASI in Pulwama on May 2013, a series of grenade attacks on security forces and the killing of CRPF personnel at Awneera Shopian in August 2013, officials said, giving details.

Besides, he was also involved in conspiring and executing several bank robberies and terror attacks in south Kashmir. These include the attack on a court complex in Pulwama on March 2014 in which two policemen were killed and the strike against a polling party in Shopian the following month in which a presiding official, Zai-ul-Haq Wani, was killed and several civilians. He was also believed to be involved in an attack on a police team in Bongam Shopian on June 2014 in which several civilians and policemen were injured.

Jhatt escaped from SMHS hospital on February 6 after he was caught in Kulgam in south Kashmir in 2014. He was moved to hospital with suspected scabies after complaining of itchiness to the medical staff at the Central Jail Srinagar.

Jammu and Kashmir Police wanted to shift him along with five other prisoners from Srinagar jail to other high security jails outside the Valley but was disallowed from doing so by the sessions court on December 26, 2017. 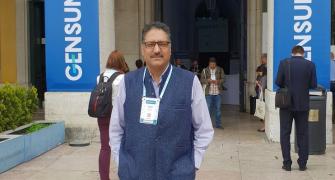 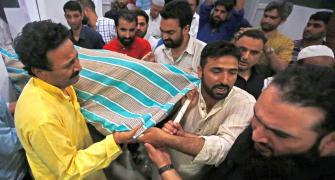