The West Bengal government has informed the Election Commission that it has provided security to the returning officer of the Nandigram assembly constituency which saw a cliffhanger between Trinamool Congress chief Mamata Banerjee and Bharatiya Janata Party's Suvendu Adhikari, sources said on Tuesday. On Monday, the TMC leader had alleged that the returning officer of Nandigram did not order recounting of votes even after she demanded it as he feared for his life.

The sources said the returning officer was provided security in person and at his home on the directions of the Election Commission (EC), amid reports that he was under pressure while performing his duty.

On Tuesday, the poll panel wrote a fresh letter to the West Bengal government asking it to take all appropriate measures to keep a strict watch and monitor on a regular basis the security provided to the officer.

The EC has also asked that the officer should also be extended appropriate medical support and counselling.

Citing the letter, the sources said that the state government has been told that any pressure or harm or even perception or furtherance of any such narrative shall have serious implications on the entire machinery deployed during the elections.

The state's chief electoral officer (CEO) has already been directed to ensure the safe custody of all election records, including polled EVMs and VVPAT machines, video recordings, and counting records strictly in accordance with laid down guidelines.

The CEO will also coordinate with the state government for additional security measures at such locations, if needed.

In a statement, the poll panel said election-related officers on the ground diligently perform in an extremely competitive political environment with full transparency and fairness.

'...and, therefore, attribution of any motive in such cases is not desirable,' it said.

Referring to the developments on Sunday when votes were counted, the EC statement said each counting table had one micro observer.

'Their reports never indicated any impurity of counting process on their respective table,' it said.

No doubt was raised on the result of round-wise counting, which enabled the returning officer to proceed uninterruptedly with the counting of votes, the statement said.

'On the basis of Form-17C duly completed by the counting supervisors, returning officer prepared a round-wise statement. In addition, on the computer installed in the counting hall, parallel tabulation work was also done in an excel sheet to counter check any human error,' it pointed out. 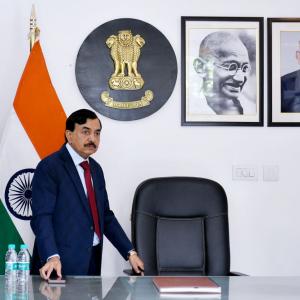