More protesters converged near the borders of the national capital as the stir by farmers against the agri laws appeared to intensify, prompting the Delhi Police to enhance security and place concrete barriers at all entry points from Haryana and Uttar Pradesh. 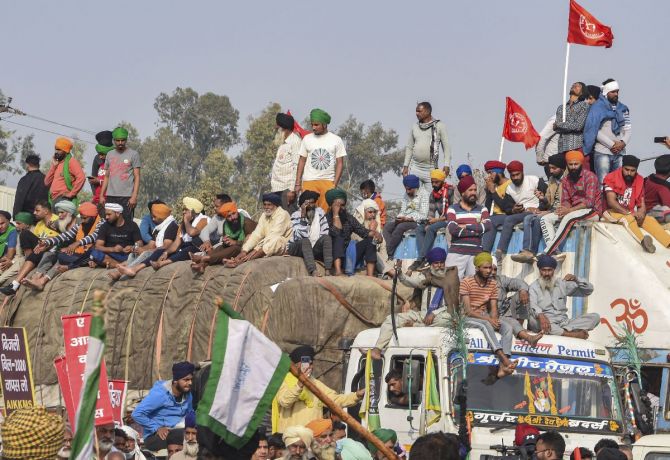 The farmers, who had on Sunday announced that they would blockade five points of entry into Delhi in coming days while rejecting the Centre's offer to hold talks once they move to the Burari ground, said they have come for a decisive battle and urged Prime Minister Narendra Modi to listen to their 'mann ki baat'.

Peaceful protests were underway at both the Singhu and Tikri borders, where farmers had gathered from Punjab and Haryana, for the fifth day.

The numbers of farmers at the Ghazipur border swelled, with more joining them from Uttar Pradesh.

Long queues of vehicles choked the roads in parts of the national capital on Monday as the Delhi Police kept the Singhu and Tikri borders closed and heightened checking at other places in the wake of the ongoing protests by farmers.

The closure of borders has also resulted in heavy traffic on other alternative routes between Delhi and Haryana.

Addressing a press conference at Singhu border, a representative of protesting farmers said that they will continue their agitation until their demands are met.

"We have come here to fight a decisive battle," Singh said. "We will remain at Delhi borders and make our strategy from here. We have come to Delhi to ask the prime minister to listen to 'mann ki baat' of farmers, else it will have to pay a heavy price," he said.

As the protests continued, Delhi Police said that it has enhanced deployment of security personnel, and multi-layer barricading is in place following the farmers's call to block all five border points.

"Delhi Police has strengthened its presence at various border points in the wake of farmers protest. All internal (Delhi Police) and outside (paramilitary) forces have been mobilised to the maximum," a senior police officer said.

He said that concrete barriers have also been placed to prevent the farmers from entering the national capital.

Talking to reporters, he said arrangements are better at the Burari ground than the existing protest site (Singhu Border).

Meanwhile, Delhi Chief Minister Arvind Kejriwal also appealed to the people of thecity to extend all possible help to the farmers and urged the Centre to hold talks with them at the earliest.

The chief minister wished everyone on the occasion of Gurupurab in a video message.

"On this occasion, I appeal to all Delhiites to do whatever they can for the protesting farmers in all possible ways," he said.

Experts have warned the ongoing agitation could well be a COVID-19 superspreader but protestors, some in masks and many without them, said the new farm laws pose a greater threat to their survival.

"A protest is a mass gathering and thus from a public health perspective, I would urge protective and preventive behaviour against the spread of coronavirus infection, failing which a superspreading event might set in," cautioned Dr Samiran Panda, head of the Epidemiology and Communicable Diseases division at the Indian Council of Medical Research.

Many of the farmers said they are aware the infection is still raging but the Centre's new farm laws are a bigger threat.

Gurmeet Singh from Faridkot in Punjab, for instance, has been at the Burari ground, one of the largest in the city, for three days and counting. And he has no intention of moving.

"We may even survive corona, but how will we survive this cruel law that will take away our bread and butter," he said.

Many protesters said that they have come prepared for a long haul with rations and other necessities.

Sukhwinder Singh, who has been agitating at the Tikri border for the fifth consecutive day, said farmers don't want to go to Burari ground -- the designated protest site identified for the demonstration. 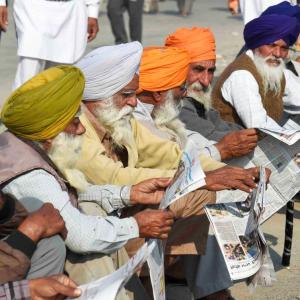