Friday's incident at Herat has dampened somewhat the spirit behind the invitation. It reminds Modi much before he officially becomes prime minister, of the challenge that awaits his government, says Sheela Bhatt/Rediff.com

When senior Bharatiya Janata Party leader Arun Jaitley called Foreign Secretary Sujatha Singh to convey Prime Minister-designate Narendra Modi's decision to extend an invitation to SAARC leaders for his swearing-in ceremony on Monday, she was surprised, like the rest of the country.

Modi's first major decision after securing power through the ballot box has evoked a mixed response among strategic pundits in New Delhi.

Largely, while the intent behind Modi's decision is much appreciated, the violent incident at Herat, near the Afghanistan-Iran border, on Friday morning shows that his decision is a gamble fraught with high risk.

The condemnable incident occurred at 3.25 am when four gunmen armed with machine guns and rocket-propelled grenades attacked the Indian consulate in western Afghanistan's Herat province. It was sheer good fortune that no diplomatic staff was injured in the attack; all four terrorists were gunned down.

Neither the Afghan government nor Amar Sinha, India's ambassador in Afghanistan, has spoken about the identity of the attackers, but an Indian intelligence agency had warned Sinha in August 2013 about a threat to his life.

A New Delhi newspaper reported that 'two militants of the Taliban's Haqqani Network in Afghanistan' had been hired to attack the Indian ambassador.

After this specific threat, a team, led by Malay Sinha, the security officer attached to the ministry of external affairs, agents from the Research and Analysis Wing and Intelligence Bureau, India's external and intelligence agencies, and the Indo-Tibetan Border Police, worked on a security drill and deployed commandos to guard the Indian mission in Kabul, besides its consulates in Kandahar, Herat, Jalalabad, and Mazar-e-Sharif.

If there was no casualty among Indian consular staff on Friday, it is due to the good work done in August 2013.

Monday's grand swearing-in ceremony has thus been saved from being overshadowed by tragedy because of the heroic fight put up by Afghan and Indian soldiers.

Outgoing prime minister Manmohan Singh noted, 'No words of gratitude would be enough for the bravery and skill with which the Afghan security forces and the Indian security detail at the consulate repulsed the attack. I also thank the government of the Islamic Republic of Afghanistan for their prompt and decisive response, and for their unstinting support over the years for the security of Indians in Afghanistan.'

The idea of inviting the leaders of the South Asian Association for Regional Cooperation nations to the swearing-in is political.

Modi is a regional leader who has become national after his grand electoral victory. By taking this decision, Modi is trying to convey many things. This is diplomacy through symbolism.

First and foremost, Modi wants to convey that his victory is grand and a tectonic shift is taking place in an important country in South Asia.

How to ensure that the world sits up and takes notice of this?

The invitation to the SAARC leaders guaranteed global coverage, created history, raised Modi's stature from regional to national, and initiated a leadership role in South Asia.

Modi did well in sending a message to America through the perfect event management of his swearing-in ceremony.

In taking the event to new heights, the incoming ruling party has sent out the message that its leader has a different worldview than the Congress which ruled the nation for 10 years.

By inviting SAARC leaders, Modi is trying to impress upon them that not just in domestic policy, even in diplomacy he will have his unique style, and what better way to send out the message loud and clear than have a photo-opportunity on the very first day in office with leaders of the South Asian region, including Pakistan and Sri Lanka!

This was perfect event management which will grab headlines in the next day's newspapers and also keep engaged the 24x7 television channels.

History would naturally be made when such a new tradition is set, but the incident at Herat has dampened somewhat the spirit behind the invitation. It reminds Modi much before he officially becomes prime minister, of the challenge that awaits his government.

Surely, the BJP is showing off that they have not only become a 'national power,' but they are more ambitious than that. Modi is sending out the message prominently that he is starting his diplomacy on a clean slate, and without any baggage of the past.

Else, he would not have gone for the SAARC grouping that includes Sri Lanka and Pakistan. In no time the anti-Sri Lankan President Mahinda Rajapaksa forces in Tamil Nadu have objected to his presence, and so has Chief Minister J Jayalalithaa.

Pakistan Prime Minister Nawaz Sharif's arrival in New Delhi will be under watch as he can't be seen in Islamabad as 'weak' when his government is struggling to come up to people's expectations. More importantly, Sharif cannot attend the swearing-in-ceremony and depart as if Pakistan is just another member of SAARC and nothing more.

On Monday, as a former prominent member of the Rashtriya Swayamsevak Sangh takes over as prime minister of India, the Pakistan prime minister's presence in New Delhi will probably make a bigger splash than the event itself.

Is this what Narendra Modi really wanted when he invited the leaders of SAARC nations? 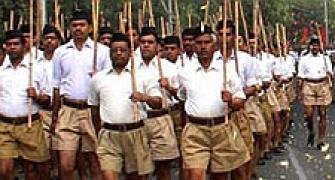 Invite to Pakistan for Modi's swearing-in has RSS blessings 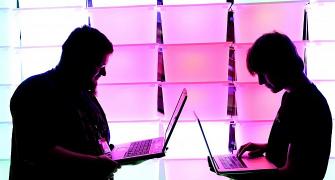 Narendra Modi's cyber army is on the move 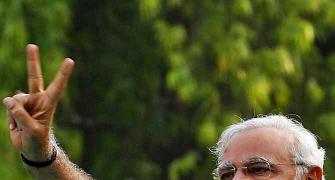 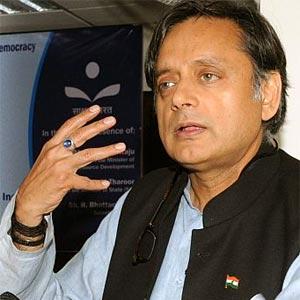 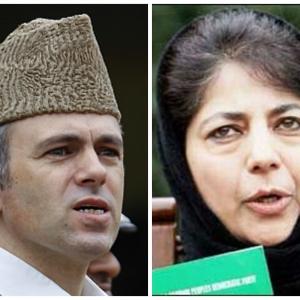