Modi, Trump to meet twice in US next week: Envoy

Prime Minister Narendra Modi and United States President Donald Trump are scheduled to meet twice in less than a week this month, India's top envoy to America has said, asserting that the India-US strategic relationship has the potential to become the "defining partnership" within this century. 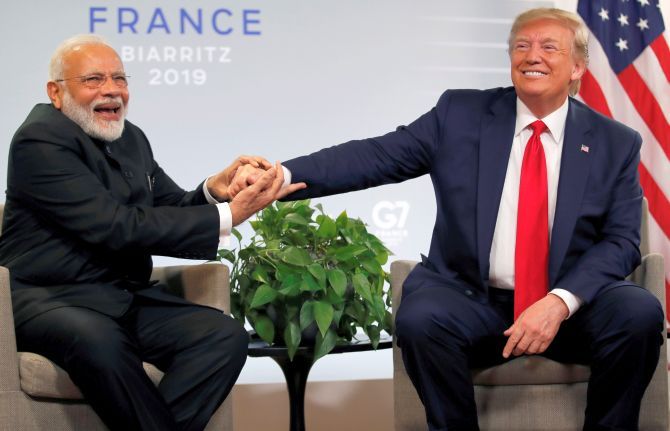 Since his re-election in May this year, Prime Minister Modi has met President Trump twice.

The previous two meetings of the two leaders were on the sidelines of the G-20 summit in Japan and G-7 Summit in France this summer.

And later this week when Modi arrives in the US, they "are scheduled to meet twice more", India's ambassador to the US Harsh Vardhan Shringla told a Washington audience on Wednesday.

So, they would have "four meetings in the span of a few months," Shringla said during the 'India on the Hill: Charting a Future for Indo-US Relations' event jointly organised by two think tanks, The Heritage Foundation from the US and Observer Research Foundation from India.

Modi is scheduled to arrive in Houston on Saturday.

A day later, Trump would join him in addressing the mega "Howdy Modi" rally to be attended by more than 50,000 Indian-Americans.

The two leaders are again scheduled to meet later in the week in New York on the sidelines of the United Nations General Assembly sessions.

"They will meet on 22nd September. The US President is joining the Prime Minister in addressing a huge Indian diaspora event in Houston and they will also meet on the margins of the UNGA in New York," Shringla said.

Modi and Trump's predecessor Barack Obama have the record of maximum number of meetings between the leaders of the two countries, but this is the first time that the Indian prime minister and the American president would be meeting four times within a span of four months.

"It's really reflective of the nature of the (India-US) relationship," Shringla said while participating in a panel discussion during the first-of-its-kind two-day event.

"India-US strategic partnership has emerged as one of the key bilateral relationships from the start of this century and has the potential to become the defining partnership within this century," he said.

The ambassador said the building blocks of this strategic partnership was the security cooperation which has emerged now in place.

Shringla said it was important to note how far the two countries have come in a short span of a decade since the Civil Nuclear Agreement.

India and the United States have signed the Communications Compatibility and Security Agreement (COMCASA), the Logistics Exchange Memorandum of Association (LEMOA). Several other agreements are at different stages of discussion, he said.

The two countries now conduct more bilateral exercises with each other than they do with any other country.

India also participates in the annual RIMPAC exercises as well as in Red Flag exercises which are US-led multinational exercises. Indian defense procurements from the US have also seen a tremendous growth, he said.

"We have also instituted the 2+2 Dialogue – a joint meeting between the Foreign and Defense Ministers of the two countries," the Indian diplomat said.

"It is worth mentioning that we also have a bilateral maritime security dialogue and several other defense cooperation dialogue mechanisms," Shringla said.

"The listing of the Jaish-e-Mohammed leader Masood Azhar by the UN Security Council in May 2019, in the wake of the Pulwama terrorist attack, is one such instance," he said.