On the first anniversary of the Narendra Modi-led NDA government, Sangh Parivar affiliates say they are annoyed with the ruling dispensation but can't live without it either. G Sreedathan reports 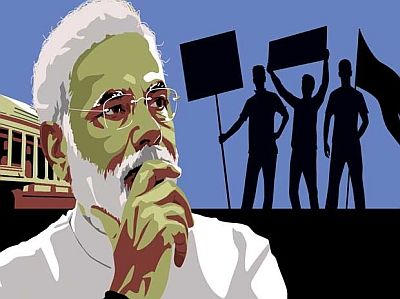 At a meeting of Rashtriya Swayamsevak Sangh-affiliated organisations in August last year, a representative of the Akhil Bharatiya Vidyarthi Parishad asked RSS chief Mohanrao Bhagwat whether the students wing should abandon all its agitations now that "we have our government in place and our man as prime minister".

Bhagwat said, "The government will do its job and you should do yours. Be the corrective force."

But in the same breath, the Sarsanghchalak told the now-strong critic of the government, the Bharatiya Mazdoor Sangh, not to resort to any anti-government agitations, "unless all other options are exhausted".

To the Vishwa Hindu Parishad, another mass organisation in the Sangh Parivar, the RSS chief's advice was: "avoid making provocative statements and give the government some time".

By October, much water had flown down the Ganga and some controversial issues such as sanction to field trials of genetically modified crops, foreign direct investment in insurance and the land ordinance had cropped up. At a similar meeting in October, the Sangh gave its nod to Parivar organisations dealing with economic issues - BMS, Bharatiya Kisan Sangh (BKS) and Swadeshi Jagaran Manch (SJM) - to raise their core issues aggressively.

Because of the efforts of SJM, BKS and Vijnana Bharati, the government had to withdraw the permission for field trials of some GM crops.

But other contentious matters such as the land Bill, labour reforms and certain economic issues continue to draw fire from these organisations.

The Sangh wants these organisations to pursue these issues as, besides its own reservations, it doesn't want to yield this space to Left trade unions and organisations. But then, there is a danger: The message the conflicting voices could send to the cadre.

The trick is in creating and managing a viable and credible command and control structure. Unlike the past, the Sangh has limited the number of persons dealing with the government to one or two.

At this meeting, like the ones earlier, many sticking points were raised and some found immediate solutions.

The cancelled airport project at Aranmula in Kerala was a case in point.

The RSS unit in Kerala, along with environmentalists and Left parties, had been spearheading the movement against the project. Despite the National Green Tribunal and the Supreme Court having rejected giving permission, the promoters used to boast that it had the support of the Prime Minister's Office, much to the fury of the agitators. The RSS had to put its foot down. But the final nail in the project's coffin was driven by Shah.

The BJP president's efforts did have some impact. The SJM, which used to spew venom till the other day, has become more accommodative.

"Although we stick to our stand that the land Bill can't be passed in the present form, we don't suspect the government's integrity or intentions. Their effort is to generate employment and spur growth. But the perception it sent out made all the difference. We conveyed to them that we have serious reservations about IPR policy and FDI (in) insurance and defence and GM technology. The commerce minister appreciates our stand," said Ashwini Mahajan, national convenor, SJM.

However, on the land Bill, BKS is not ready to budge. BKS President Prabhakar Kelkar said, "The land Bill has triggered panic among farmers across the country. If the government fails to read the writing on the wall, the people will teach it a lesson."

The BMS has declared a war on the government on the issue of labour reforms. Former BMS president Saji Narayan said, "The people have voted for a paradigm shift in economic policy. The government is pursuing a pro-capitalist and anti-labour policy. We will fight till the last and the government will have to come down."

Education is a key area of focus for the Sangh.

"The Human Resource Development ministry has done a lot of good work. We have welcomed the UGC's decision to order a review of the controversial four-year undergraduate programme of Delhi University," said Shreerang Kulkarni, in-charge, national media and PR, ABVP.

Although the VHP has not been vocal, there is discontent among a section of the workers.

A member of an RSS think-tank said, "The government has to do something fast to curb insurgency in the northeast. In Arunachal Pradesh, Hindus are being converted to Christianity by insurgents, using force and threat. The government seems to have come under pressure over the anti-conversion law."

The VHP would like the government to release the 2011 census report that is the first after 1931 to provide population data on religion.

The organisation cannot understand why there is a delay in releasing the report, especially as it lends credence to the argument that the demographic profile of some states has altered to turn the majority into a minority.

With the coming elections in Bihar, the BJP too can't afford to annoy the Sangh.

However, the general refrain among the saffron brotherhood is that formation of the Narendra Modi government is the best thing to happen to India after decades. And, they're willing to forgive it its trespasses.

PARIVAR'S UNFINISHED AGENDA
A look at what each parivar outfit wants

SANGH IS HAPPY WITH...