Journalist Priya Ramani told a Delhi court on Monday that she was “targeted selectively” through a criminal defamation complaint by former Union minister M J Akbar “to halt the avalanche of allegations of sexual misconduct" against him in the wake of #MeToo movement in 2018. Ramani made the submission before Additional Chief Metropolitan Magistrate Vishal Pahuja through her lawyer during the final hearing in the complaint filed by Akbar against her.

Ramani in 2018 accused Akbar of sexual misconduct around 20 years ago when he was a journalist.

Senior advocate Rebecca John, appearing for Ramani, told the court on Monday that over 14 women accused Akbar of sexual harassment during the #MeToo movement but he has filed complaint only against Ramani.

“Priya Ramani was targeted selectively... Either everyone's articles and tweets are defamatory or none is. Or are the other allegations accepted,” she said.

John read Akbar's statement that he was aware of the existence of other allegations on the date of the filing of complaints.

“He chose to go after Priya Ramani. Till date there is no complaint against anyone else. Priya Ramani was selectively targeted to halt the avalanche of allegations that came out against him at that time,” she told the court.

Contradicting Akbar's testimony, John said that “Complainant (Akbar) wants us to believe that he didn't have full details of the tweets as he was in Africa. In the evidence of Joyeeta Basu (witness appearing in support of Akbar's complaint), this is falsified.”

“Basu said that Mr Akbar thanked her on October 10, 2018 for her tweet in solidarity with him and she told him to take legal action. All this is while he is still in Africa,” John said.

John further said that the witnesses produced by Akbar to prove his complain were not reliable.

“Most of them said that the damage to reputation was because of Ramani's tweets but were disconnected to the tweets by other women. It is not possible that they did not read the avalanche of allegations against Akbar.

"By quoting only Ramani's tweets, an inference can be drawn that they are lying. The witness were devoted to Akbar. One said they shared a 'guru-shishya' relationship. These witnesses are close professional and personal associates,” John told the court.

She said the complainant witnesses were “unreliable as they are interested parties”.

“They pleaded ignorance of allegations by other journalists. They selectively deposed against Ramani. They had no personal knowledge about her truth. So what are they testifying against? None of them have met me. They don't know about my incident or have worked with me. How can you therefore contest my allegations,” John told the court.

Ramani told a Delhi court earlier that her "disclosure” of alleged sexual harassment by Akbar was “her truth”, which she made in “good faith for the public good”.

The court will further hear the arguments on September 19.

Akbar had earlier told the court that Ramani defamed him by calling him names such as 'media's biggest predator' that harmed his reputation.

He denied all the allegations of sexual harassment against the women who came forward during #MeToo campaign against him.

Akbar had earlier told the court that the allegations made in an article in Vogue and the subsequent tweets were defamatory on the face of it as the complainant had deposed them to be false and imaginary and that an “immediate damage” was caused to him due to the “false” allegations by Ramani.

Ramani had earlier told the court that her “disclosure” of alleged sexual harassment by Akbar has come at “a great personal cost” and she had “nothing to gain” from it.

She had said her move would empower women to speak up and make them understand their rights at workplace.

Several women came up with accounts of the alleged sexual harassment by Akbar while they were working as journalists under him.

He has termed the allegations “false, fabricated and deeply distressing” and said he was taking appropriate legal action against them. 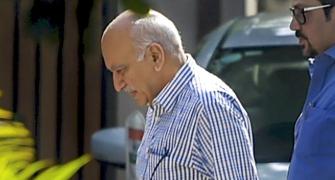 MJ Akbar case: Silence is not an option, Ramani 'Truth my defence': Priya Ramani gets bail in defamation case by MJ Akbar