The Congress on Wednesday questioned how an "international business broker" like Madi Sharma, who is alleged to have organised the private visit of European Union parliamentarians to Kashmir, have access to the Prime Minister's Office. 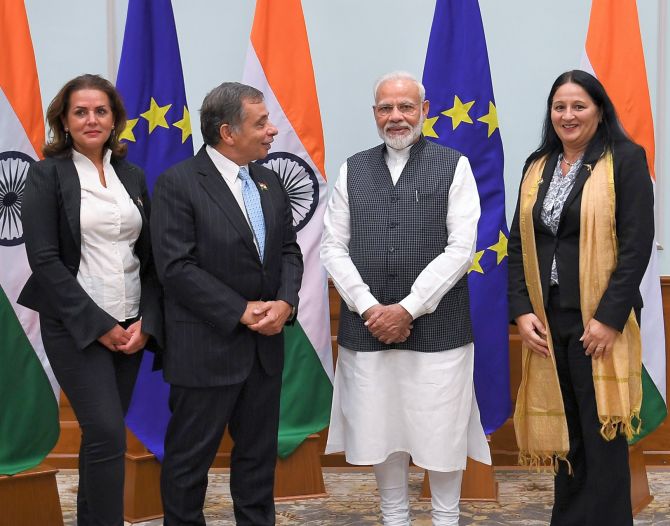 Party general secretary Priyanka Gandhi Vadra said that while farmers and unemployed youth did not have the facility of meeting the prime minister and airing their grievances, "international business brokers" like Sharma were giving assurance that the visit would be sponsored.

"Farmers and unemployed youth of India don't have the facility of meeting the prime minister, so that their problems can be heard. But yes, international business brokers like Madi Sharma can proudly write, 'come to India we will also bear your expenses'."

Congress chief spokesperson Randeep Surjewala questioned who was Madi Sharma and in what capacity was she fixing the appointment of the MPs with the prime minister and why was Government of India facilitating it.

He also questioned where was the money to finance the entire visit coming from and why had the MEA been completely sidelined.

Party leader P Chidambaram tweeted, "Who knows? The European MEPs may be invited to attend the next session of Parliament and speak in support of the government."

The former finance minister, who is lodged in Tihar jail in the INX Media case, had asked his family to tweet this on his behalf.

Former Union minister and Congress leader Kapil Sibal asked on Twitter that if everything was normal in the valley then why was there a security convoy, bullet-proof vehicles, deserted roads and detention facilities. He pointed out that no trade body member, mainstream politician, prominent member of civil society met the EU delegation.

Capping a visit that attracted controversy and opposition ire, EU parliamentarians visiting Jammu and Kashmir on Wednesday termed Article 370 an internal issue of India and said they stand by the country in its fight against terrorism.

The 23 members of European Parliament, who flew into a restive Kashmir Valley pockmarked by shutdowns and clashes for a two-day visit on Tuesday, also condemned the killing of five migrant labourers from West Bengal by terrorists in south Kashmir's Kulgam district.