The MEPs said they stand by India in its fight against terrorism. 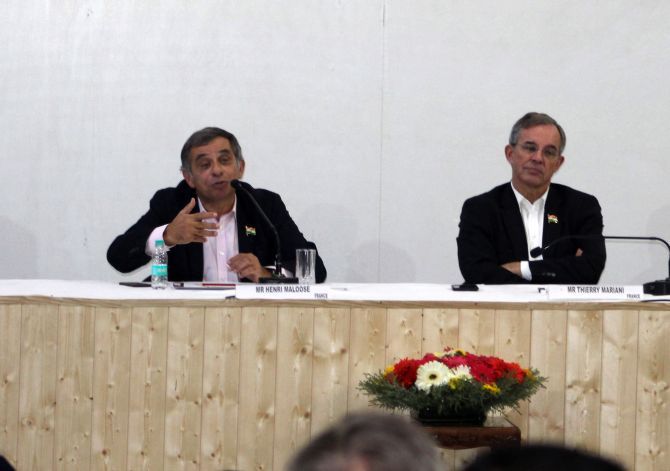 Capping a visit that attracted controversy and opposition ire, European Union parliamentarians visiting Jammu and Kashmir on Wednesday termed the dilution of Article 370 an internal issue of India and said they stand by the country in its fight against terrorism.

The 23 members of European Parliament, who flew into a restive Kashmir Valley pockmarked by shutdowns and clashes for a two-day visit on Tuesday, also condemned the killing of five labourers from West Bengal by terrorists in south Kashmir's Kulgam district.

Before flying back to New Delhi, members of the delegation met selected journalists at Srinagar's old airport.

"If we talk about Article 370, it is India's internal matter. What concerns us is terrorism which is a global menace and we should stand with India in fighting it. There was an unfortunate incident of the killing of five innocent labourers by terrorists. We condemn it," said Henri Malosse from France.

Malosse, a former president of the European Economic and Social Committee, said the team got a briefing from the army and police as well as young activists and exchanged "ideas of peace".

Nicolaus Fest, from the right-wing Alternative for Germany, told journalists separately that the government should address the "imbalance" of European parliamentarians being allowed to visit but India's opposition MPs being refused permission.

Several of the 23 MPs belong to right and far right parties and are not part of he mainstream in their own countries.

The visit has been cloaked in controversy with several questions raised on its funding and some reports suggesting it was organised by an NGO that promised a meeting with Prime Minister Narendra Modi.

The two-day trip, to assess the situation in Jammu and Kashmir, is significant for more than one reason.

It is the first high-level foreign visit to Kashmir after the August 5 decision of the Centre to revoke the state's special status under Article 370 and downsize it into two union territories.

And it ended on the last day of Jammu and Kashmir's existence as a state.

On Thursday, the state will be bifurcated into the union territories of Jammu and Kashmir, and Ladakh.

"Once we go back to our countries we will inform them of what we saw," the Prawo i Sprawiedliwosc party leader said.

Newton Dunn from the Liberal Democrat party in the UK described the visit as an "eye-opener".

"We belong to a place Europe which is peaceful after years of fighting. And we want to see India becoming the most peaceful country in the world. And for that we need to stand by India in its fight against global
terrorism," he told reporters.

Thierry Mariani, a member of the Rassemblement National party in France, told the media he had been to India many times and the delegation was here not for political interference but to get a first-hand
knowledge of the ground situation in Kashmir.

"Terrorists can destroy a country. I have been to Afghanistan and Syria and I have seen what terrorism has done. We stand with India in its fight against terrorism," he said.

"By calling us fascists, our image has been tarnished. It's better that one should know about us properly before tarnishing our image," he added, referring to some media reports.

The visit came under stringent attack from not just the opposition parties, with several leaders not being allowed to go beyond the Srinagar airport from August 5 on, but also the ruling Bharatiya Janata Party's allies Shiv Sena and the Janata Dal-United.

"There are several contradictions in the visit. On the one hand, India is against internationalising the issue. But, on the other, we have allowed a visit by these parliamentarians in their personal capacity. Was it an appropriate time? What is the criteria for selecting these members?" JD-U leader Pavan Varma asked.

The Shiv Sena, the BJP's ally in Maharashtra, wondered whether the EU delegation's visit is an "external invasion" of India's independence and sovereignty.

In an editorial in the Sena mouthpiece 'Saamana', it sought to know why the MPs were allowed to visit Kashmir when Jawaharlal Nehru is still criticised for taking the issue to the UN.

The opposition Congress said the EU MPs visit to Kashmir is the "biggest diplomatic blunder" in India's history.

The EU team originally comprised 27 parliamentarians but four did not travel to Kashmir and reportedly returned to their respective countries, officials said without divulging any reason.

The team arrived here on Tuesday to a complete shutdown, blockades, stone pelting and clashes between people and security forces in several parts of the city and the Valley. Terrorists also fired at a bullet-proof, mobile bunker of the CRPF in Pulwama but there were no casualties.

On Monday, the MPs met the prime minister in Delhi.

He "expressed the hope that they have a fruitful visit to various parts of the country, including to Jammu and Kashmir".

A few weeks ago, a US senator was denied permission to visit Kashmir.

A joint delegation of opposition MPs, including Congress' Rahul Gandhi, was not allowed to go beyond the Srinagar airport after their arrival from Delhi and were sent back to the national capital about two months ago. 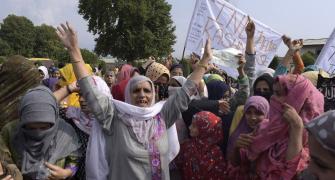 New UT of J-K: Who will control what Not here to interfere in Indian politics: EU MP