Meet the men behind the Bhima-Koregaon violence

Sambhaji Bhide and Milind Ekbote -- the right-wing Hindu activists from Maharashtra – are no strangers to controversy. 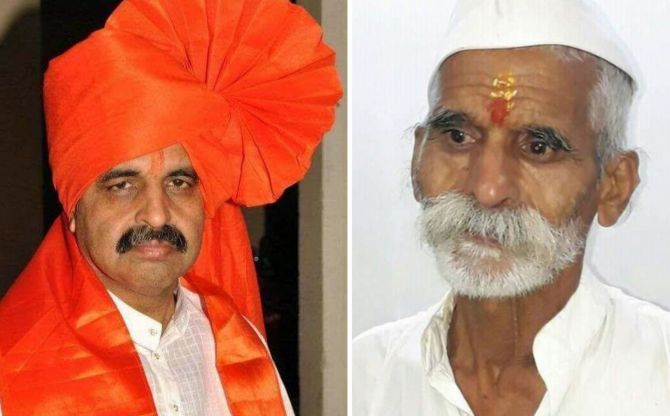 IMAGE: Milind Ekbote (left) and Sambhaji Bhide have come under fire for caste violence in Maharashtra over the bicentenary celebration of the Bhima-Koregaon battle fought 200 years ago.

Sambhaji Bhide and Milind Ekbote – the right-wing Hindu activists from western Maharashtra, under fire for caste violence in Maharashtra over the bicentenary celebration of the Bhima-Koregaon battle fought 200 years ago, are no strangers to controversy.

Violence erupted when Dalit groups were celebrating the bicentenary of the battle recently. It was followed by protests, thus exposing the simmering caste tensions even as a bandh disrupted life in Mumbai on Thursday.

Dalit organisations have sought arrest of the duo, accusing them of orchestrating the violence.

Bhide, 85, is known among his followers as ‘Bhide Guruji’. He is a staunch right-wing Hindu activist and an ardent admirer of Chhatrapati Shivaji Maharaj. He has a sizeable following in western Maharashtra.

A gold medallist in Chemistry, Bhide has worked as a professor in Pune-based SirParshuramCollege. A former Rashtriya Swayamsevak Sangh member, Bhide founded the Shiv Pratishthan Hindustan outfit, which is mostly active in Sangli, Satara and Kolhapur districts in western Maharashtra.

Bhide attracted national media spotlight when at an election rally in Sangli district in October, 2014, Prime Minister Narendra Modi said he had come to seek blessings of `Bhide Guruji’, whom he said had been an “inspiration” during the early days of the PM’s life.

Bhide’s outfit also works for the conservation of forts in Maharashtra. In June last year, Pune police had registered a case against Bhide and his followers for obstructing ‘waari’, a procession of varkaris (pilgrims) to Pandharpur.

Bhide uses a bicycle to travel and remains barefooted, no matter where he goes. He travels in state-run buses and does not own a house.

Milind Ekbote heads the Samast Hindu Aghadi. He has been involved in activities like intercepting vehicles on suspicion of carrying beef.

He contested the 2014 assembly election on a Shiv Sena ticket from Shivajinagar constituency in Pune.

His election affidavit said he has 12 cases registered against him, including rioting, unlawful assembly and disobedience of order duly promulgated by a public servant.

The charges also include promoting enmity between different groups on grounds of religion, race, place of birth, residence, language and criminal intimidation. 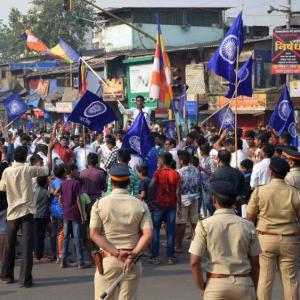