The shutdown generated tension in Mumbai and a number of towns and cities across Maharashtra. 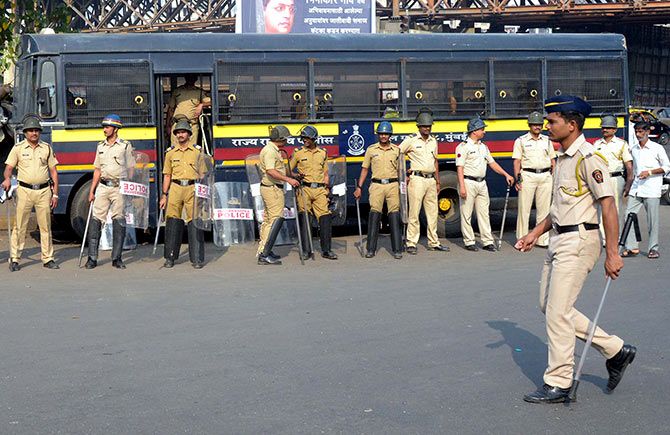 Protesters attacked buses, stopped suburban trains and blocked roads at various places in Mumbai as normal life was hit in the city and other parts of Maharashtra during a bandh called against violence on the anniversary of a battle fought 200 years ago.

The bandh was called off later in the day.

Hundreds of protesters tried to block the Western Express Highway in the morning but were moved from the spot by police.

Incidents of stone pelting were reported at a few places on the harbour line, police said. 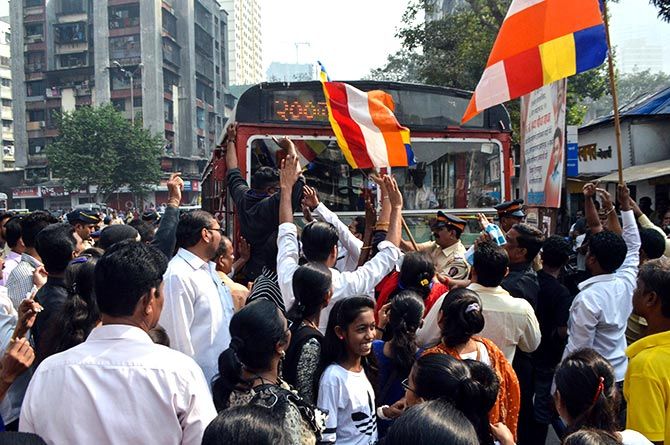 Protesters jumped on rail tracks of harbour line at Govandi, Mankhurd and Kurla, due to which suburban services towards Panvel, Belapur and Vashi were stopped for a few hours, the official said.

On the Western Railway, protesters obstructed services at Nallasopara station.

Mumbai’s famed tiffin carriers, dabbawalas, chose not to provide their services on Wednesday. 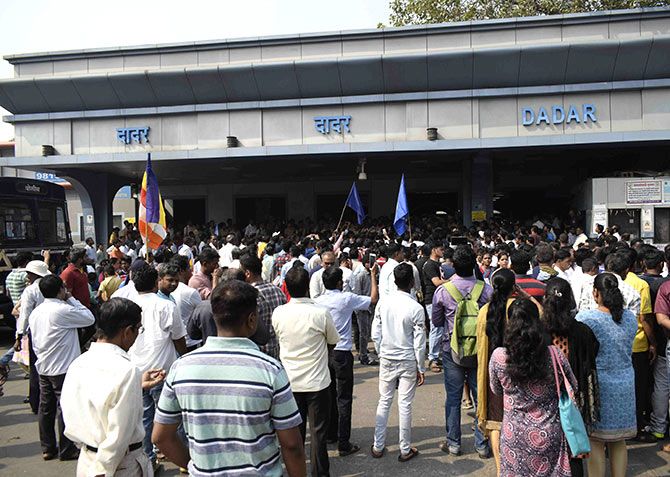 Bharipa Bahujan Mahasangh leader and B R Ambedkar’s grandson Prakash Ambedkar had called for the bandh to protest against the state government’s “failure” to stop the violence at Bhima Koregaon village in Pune district two days ago.

Later, announcing the bandh withdrawal, he alleged right-wing leaders Sambhaji Bhide and Milind Ekbote were behind the Pune violence and demanded that they be arrested and made to face the same legal process as Mumbai blasts accused Yakub
Memon.

“Nearly 50 per cent of the state’s population took part in the shut-down,” Ambedkar told reporters. “Not only Dalits, but OBCs also participated in the bandh,” he added.

Except for a couple of incidents, the bandh was largely peaceful, he said. 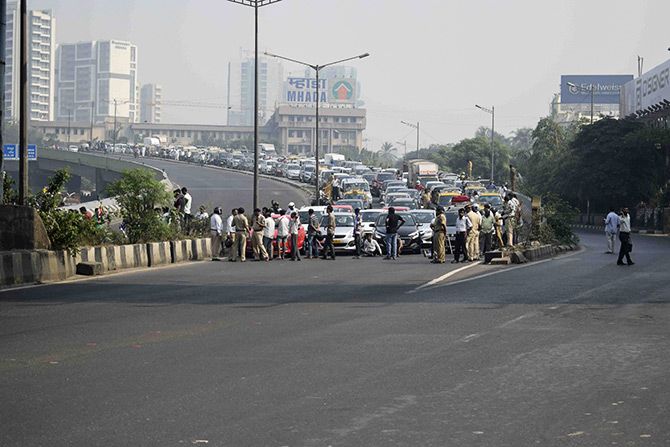 IMAGE: The situation on roads for the better part of the day belied Ambedkar’s claim as incidents road blockades, arson and stone-pelting were reported in Mumbai and elsewhere during the day.
Photograph: Sahil Salvi/Rediff.com

However, the situation on roads for the better part of the day belied Ambedkar’s claim as incidents road blockades, arson and stone-pelting were reported in Mumbai and elsewhere during the day.

While the state government said it hasn’t declared a holiday in schools on Wednesday due to the bandh, bus operators said they won’t run school buses in Mumbai on Wednesday.

Mumbai police registered nine cases in connection with violent protests in the city. Over 150 people have been detained in the city since yesterday, police said.

The Eastern Express Highway was blocked for over five hours as protesters blocked it, police said.

Over 50 BEST buses were vandalised by protesters and four bus drivers were injured, police said. 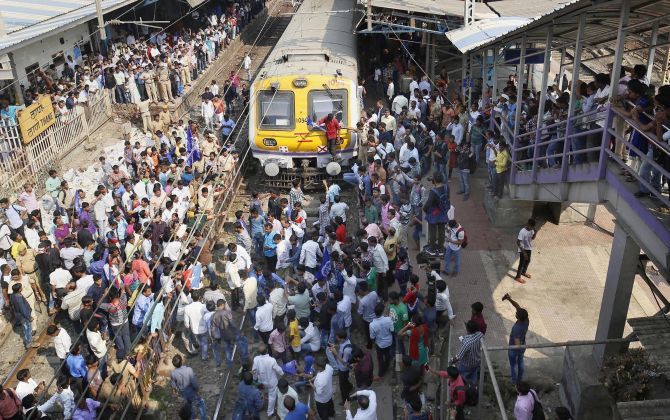 In Pune, the protest was largely remained peaceful in the city, barring a few incidents of stone pelting on public transport buses and a road blockade in Pimpri in the district.

“Barring four to five incidents in which buses of the Pune Mahanagar Parivahan Mahamandal Limited were stoned by anti-social elements in Sukhsagar Nagar and Singhgad Road and one rasta roko in Pimpri, overall bandh in the city was largely incident-free,” said Assistant Commissioner of Police (South/North Region) Ravindra Sengaonkar. 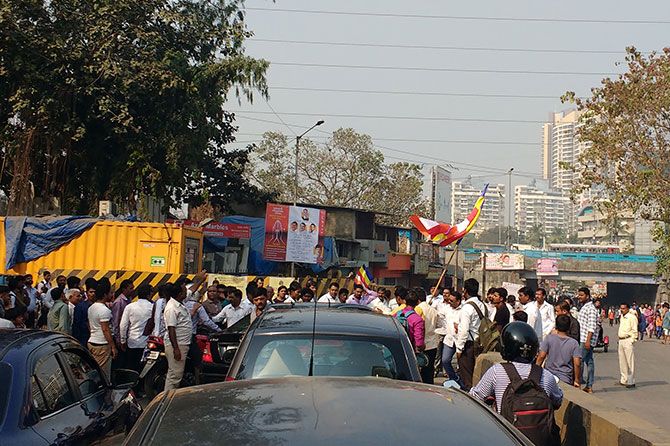 IMAGE: Traffic at Kandivali in Mumbai stopped by protesters belonging to Dalit outfits.

According to Pune Mahanagar Parivahan Mahamandal Limited, a total of 50 buses were stoned by miscreants in different parts of the city since Tuesday morning.

Almost 80 per cent services of the Maharashtra State Regional Transport Corporation were disrupted due to protests. 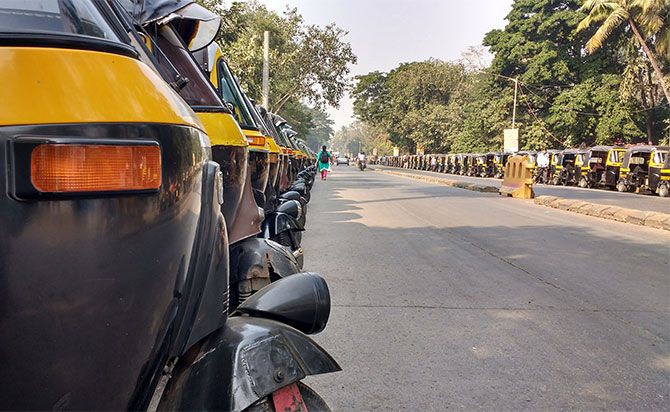 Some protesters tried to block expressway near Urse toll plaza near Pune, but police cleared the highway in 30 minutes.

In Kolhapur, the bandh took a violent turn as mobs attacked shops and vehicles at various locations in the city throughout the day and set a vehicle on fire in Shahupuri area.

Stones were hurled at many public and private transport buses.

Tension escalated after Dalit activists and Shiv Sena workers came face to face at some spots.

Incidents of stone-pelting were reported in Dasara Chowk and CPR Hospital areas of the city.

A mob tried to attack the office of a local newspaper but police prevented them from doing so.

A separate group attacked shops, kiosks and vehicles on Station Road and in Shahupuri area.

Maharashtra Chief Minister Devendra Fadnavis said those responsible for the caste violence in Pune will face action and the matter will be taken to its logical end.

He said the state government will soon approach the Bombay high court, asking it to name a sitting judge to probe the January 1 violence at Bhima-Koregaon in Pune district.

Violence erupted in Pune district on January 1 when Dalit groups were celebrating the bicentenary of the Bhima-Koregaon battle in which the forces of the British East India Company defeated the Peshwa’s army.

Dalit leaders commemorate the British victory, as it is believed that soldiers from the Mahar community were part of the East India Company’s forces. The Peshwas were Brahmins, and the victory is seen as a symbol of assertiveness by Dalits.

The battle has come to be seen as a symbol of Dalit pride because a large number of soldiers in the Company force were the Mahar Dalits. Since the Peshwas, who were Brahmins, were seen as oppressors of Dalits, the victory of the Mahar soldiers over the the Peshwa force is seen as Dalit assertion.

On 1 January 1927, Dr B R Ambedkar visited the memorial obelisk erected on the spot which bears the names of the dead including nearly two dozen Mahar soldiers. 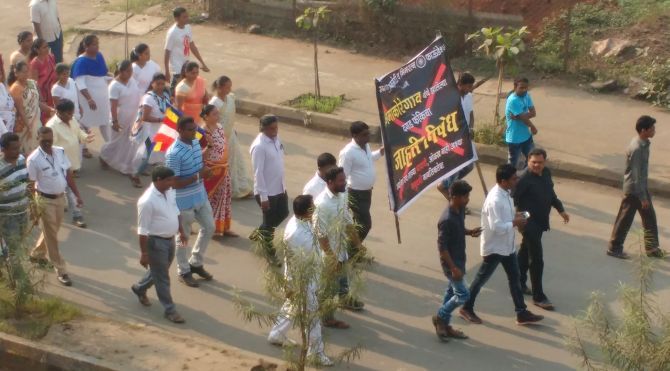 WATCH: Commuters stranded due to unavailability of transport in Mumbai

WATCH: Vehicles on highway exit are forced to take a U-turn by protesters in Kandivali

The protests by Dalits in Maharashtra spread to adjoining Gujarat on Wednesday, where members of the community took out a rally and shouted slogans outside the BJP office.

A Dalit group held a protest march in Udhna locality to express solidarity with the community members in Maharashtra over the caste violence in Pune district on January 1.